Arquitectonica is one of the world’s biggest and most respected architectural firms—900 employees in 11 offices, next year celebrating 40 years since it was founded in Coconut Grove by Bernardo Fort-Brescia and his wife, Laurinda Spear, who remain the firm's two co-principals. So how did it expand and succeed so rapidly?

We snapped Bernardo in his office on Oak Avenue last week as he revealed the secret: “Never plan!” He recalls fondly that at the outset, the original five employees of the firm did a motley assortment of projects: a house in Miami Shores, then a medical building, then a six-story office building off Brickell. They grew to 10 people, then 20, then 60—and now, years later, 170 in Miami alone. They followed not a business plan, but their instincts, one thing after another, leading to his simple philosophy: “Take advantage of your opportunities.” And on it’s gone: Instead of creating an office in Hong Kong to look for work, they happened to get a job there, then opened an office, then exploded in Southeast Asia. Today they’re doing something big in Trafalgar Square, and only now opening an office in London.

After their first three projects, they got their big break, Bernardo tells us: Developers (and Holocaust survivors) Sol Luger and Sam Greenberg asked him to do the Atlantis, the 20-story building at Brickell with the doughnut hole (or more technically “skycourt”) that became famous in the opening credits of Miami Vice. He had done a sketch for a previous client on that site, who sold to someone, who then sold to Luger and Greenberg. They gave him a call—and a chance. Bernardo feels so indebted, he still takes the now 90-somethings to lunch once a year.

Then Bernardo read that Harry Helmsley was going to build a new hotel in NY—the Palace. All of 27 years old, Bernardo flew up there and camped out at his door until he got the job. He says he tries to convey the insight to his kids: “Forget all this planning for life,” charting your career is overrated. Especially for architects, he says, who have to begin their careers over again with every new project, having to prove yourself no matter what you’ve done before.

On the other hand, Bernardo and his firm are deeply into details and planning when it comes to architecture itself. They purposely designed their Coconut Grove office to look unfinished and reveal how buildings are made. Here Bernardo shows us a workman's calculations…

…and welding marks. They don’t use drywall, they expose the duct work, and they furnish the place with recycled samples. Bernardo feels it’s an education for clients, and a statement that the firm is honest, raw and lean. They also have operable windows that literally and metaphorically provide the office a breath of fresh air. 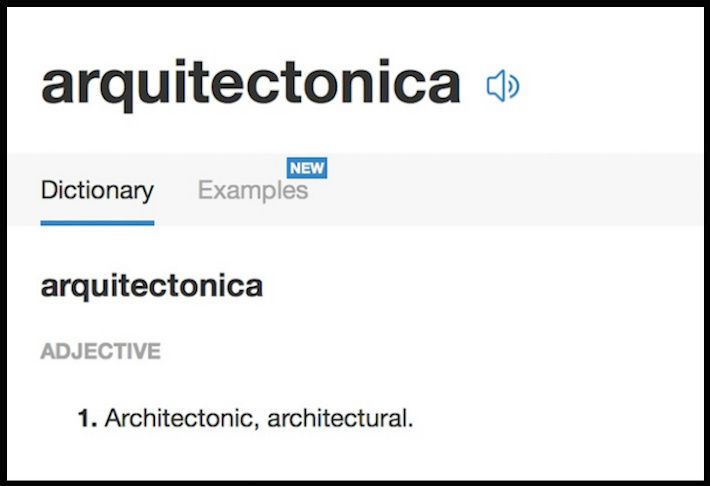 Even the name of the firm was spontaneous. Bernardo recalls that they needed one quickly when they got their first job (the house) and picked the Spanish word for “architectural” as a placeholder, intending to think of something better. But before they knew it, they’d been written up in a magazine and the name had brand value. Following Bernardo’s motto, they decided to take advantage of opportunities and simply keep it. (They also rationalized it would take people a lot of effort to spell and therefore they’d remember it. And that it would give every employee an opportunity to be the face of the firm and avoid clients insisting on seeing Mr. Fort-Brescia.)

The firm seems to be designing half of Miami (like massive Brickell City Centre), but it's incredibly active all over the world. Bernardo says they're seeing strong growth in countless markets, even China, France, Brazil, Peru, Argentina and Mexico, “despite what you read”—and maybe even because of it, i.e., weak currencies are re-focusing nationals on investing and building internally.

In the US, they see Silicon Valley, NY and California as still very much hopping, not to mention Florida, like their plans (in this rendering) for the Sunny Isles Ritz-Carlton. Bernardo loves the fact Arquitectonica is so international and diversified because he says this allows employees cross-fertilize, showing clients what’s happening elsewhere, e.g., things in Florida that people in Monaco haven’t thought of or vice versa. Indeed, the firm allows employees to move to any other office—a great way, Bernardo says, for them to get exposure to other ideas and share their own experiences.

Today the Coconut Grove office serves as the firm’s design studio (management functions are in NYC). It becomes clear that Bernardo’s heart lies here, where he and Laurinda have raised their seven children. He points to kids with bookbags out the window walking home from school, and says the area’s 6,000 students and vibrant restaurant and multifamily landscape give it a “village core.” Although he’s a believer in urban densification, he points out to neighbors you can do this without over-tall towers—Paris is a non-skyscraper city, he reminds them.

And he has a nostalgic attachment to these digs; although for a while the firm’s Miami office was in Brickell, it actually started in a strip center where the current office stands today. Plus, it’s just a five-block commute by golf cart from home.