Luck And Judgement Prompt U+I Pivot To Offices At Mayfield 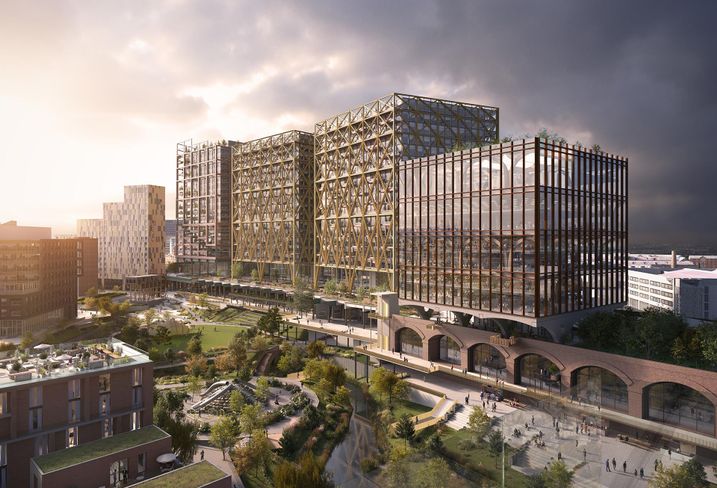 It is tempting to believe that big wins are the result of high-level strategic thinking. But sometimes chance, accidents and other people’s decisions help to curve the ball so it lands in just the right place.

U+I, the developer of the £1.4B Mayfield scheme near Manchester Piccadilly, is the beneficiary of just this kind of break.

Assuming that its current proposal for a first office phase in two blocks of 97K SF and 316K SF is approved by Manchester City Council planners on 13 February, U+I  will bring forward plans for an “incredibly cool” office development of up to 1.2M SF above the existing Mayfield Depot, React News reported.

Later it will return to the residential element of the scheme, which will be focused on a plot at Hoyle Street.

Construction work on the first 97K SF block could begin by the end of this year, PlaceNorthWest reported.

Residential is not being shelved or shrunk, but the completion of the 1,500 units is taking a back seat whilst U+I takes advantage of a fast-growing office market.

“Our £1.4B plans for the imaginative and soulful transformation of Mayfield over the next 10-15 years are fully in line with Strategic Regeneration Framework adopted by Manchester City Council in 2018, which sets the parameters for the site master plan," a spokesman told Bisnow. "The residential elements of Mayfield, at Hoyle Street East, have not changed and are integral to our plan to create a distinctive mixed-use urban community on the site."

U+I’s decision to kick off Mayfield with office-led rather than a residential-led development is a case of carpe diem.

But what was the immediate cause of the rethink on a large slice of the Mayfield site? The answer was the trains. As the prospect of expansion at Manchester Piccadilly railway station grew more real, so the Hoyle Street part of the site reserved for high-rise residential development came into doubt. This is because part of the site will be needed for construction work associated with adding new platforms 15 and 16 to Piccadilly station.

U+I said that by the time the station is expanded — as part of the Northern Hub project — and it gets round to the residential development, the by-then well-established mix of new city park, office destination and associated amenities will make Hoyle Street’s towers a super-attractive proposition.

Plans for three office towers of 16 to 25 storeys on top of the historic Mayfield Depot railway podium were in the 2018 master plan. The feeling then was that the site’s 1.7M SF of office space would probably need to wait whilst the roaring city residential market did the heavy lifting of placemaking and positioning. Suddenly, with around 400K SF already before planners, that doesn’t seem to be the case.

The decision comes after a year in which the city residential sector slowed construction starts as developers waited to see the market absorb the massive surge in supply due in 2020 (according to Deloitte Real Estate, 2020 will see 8,800 units completed, more than double that seen in 2019). The hike in land prices persuaded developers they were doing a wise thing.

Simultaneously the office market looked like generating similar values, appealing to a more orderly occupational market and a more mature investment market. Quite simply, offices are easier. U+I responded with its fast-forward plans for office development.