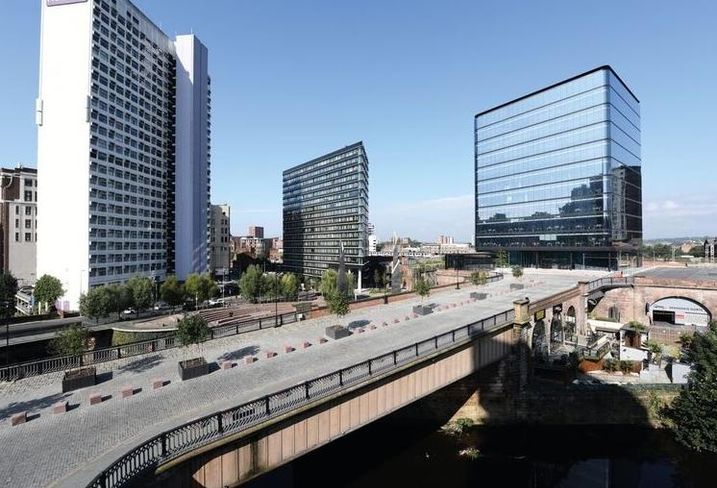 101 Embankment, Salford, ought to be an easy job for lettings agents Colliers International and newly appointed colleagues at Cushman & Wakefield.

MMA Holdings is presiding over 106K SF of available new Grade A office floorspace in a city with a very real shortage. Around 170K SF of new Grade A floorspace is currently available in Manchester city centre, and yet credible known demand approaches 1M SF.

101 Embankment has plenty to offer, not least that Harvey Nichols and a cluster of tram and rail stations are on its doorstep, but its biggest selling point is that it exists and is ready for tenants.

The Manchester office market has been galvanised by a surge in lettings activity from corporates, but given rocket-boosters by the growth aspirations of coworking and flexible workspace operators.

Estimates from CBRE suggest that “rock solid” demand from corporate occupiers amounts to at least 450K SF, whilst live requirements from coworking operators add up to more than 300K SF.

That is why the postponement of WeWork’s initial public offering poses an interesting dilemma. On the face of it, any wobbles at WeWork affect the future of an appreciable chunk of Manchester’s Grade A floorspace.

The coworking and flexible workspace provider has five Manchester outlets, the most recent being agreed in April when it took all 51K SF at Boultbee Brook's refurbishment of 75 Mosley St., Manchester.

WeWork currently occupies 307K SF in Central Manchester and is believed to be considering options on further floorspace.

There is no suggestion that WeWork will release grey space to the market, but if it did this would not deliver the market shock some might expect, said CBRE Manchester Managing Partner John Ogden. Instead, it might be a fillip.

“There is really credible demand from corporates. BT alone is looking for 200K SF and you can produce a long list of others. We have two requirements of 50K SF each, Cusham & Wakefield are advising on another 75-100K SF of requirements, this is all genuinely rock solid stuff. At the same time we have 300K SF of demand from coworking and flexible workspace operators, all of which is live,” Ogden said.

Whilst WeWork are preoccupied, rivals will act, Ogden said.

“WeWork’s IPO being shelved has to be a concern for The We Company, and may mean it cannot access new credit lines or that they will need a restructuring before the return to the IPO market. But there is a potential opportunity here for rivals like IWG, which has been bringing some new products to the market, and agreeing quite commercial terms with landlords. IWG’s gain may be WeWork’s loss."

If WeWork’s Manchester floorspace came back onto the market, there is demand enough to fill it instantly, Ogden said. "I’m not concerned about it from a Manchester market point of view."

WeWork's future is intimately entangled with that of the Manchester office market, as is the case in so many global cities. But in Manchester it may cut a different way.