Want To Keep Women In CRE? Say Goodbye To The 9-To-5 Workday

As a new generation of workers enters the commercial real estate industry, experts say changing the 9 a.m. to 5 p.m. in-office workday is a key way to retain top talent.

With the advent of technology and multiple ways workers can connect with their colleagues or clients, there is very little reason for employers to prevent their workers from working remotely, even if it is just a couple of hours a day, experts said at Bisnow's Los Angeles Power Women event.

MAK Center for Art and Architecture Executive Director Priscilla Fraser said while men and women would both benefit from getting rid of the traditional daily work schedule, this would have a bigger impact on women.

One of the biggest challenges for CRE is retaining women, Fraser said. Allowing them to work remotely would give them more flexibility and an incentive to remain in the industry.

"The 9-to-5 model is a little archaic," Fraser said. "At the natural progression of life, it’s hard to continue to have the same amount of hours and that level of required presence. I think most people would agree that if you give a working mom two or three flexible hours, the working mom could accomplish things that it can take others two weeks to finish."

At the half-day conference, panelists discussed the importance of female mentors and promotion, recruitment and retention in commercial real estate.

Newmark Knight Frank Senior Managing Director Laura Stumm talked about the need for women to be proud of their work and to stand up for themselves in the workplace. There were times in her career, Stumm said, when she was handed an assignment and completed it, only to be bypassed when presenting it.

Stumm said it is important for women not to be passive in that situation, and demand to be in the room. Don't be afraid of to have that "uncomfortable meeting" with your boss, she said.

"You have to take a lot of pride in your work," Stumm said.

When it comes to recruitment and retention, a lot of progress had been made in the recruitment part, experts said.

When she graduated with a civil engineering degree from the University of Southern California in 2012, only 25% of her class were women, Rotter said. The 2020 USC graduating class is now 50% women, she said.

"It starts with education," Rotter said.

She was only one of a couple of female architects when she graduated from architecture school in the 1970s. But while more women are entering, there is still a long way to go, Welborne said.

"I'm heartened with what I see," Welborne said, adding that her company is composed of about 50% men and women.

The biggest challenge, though, is retaining a talented woman once they become a mother. Fraser said she remembers working for an architecture firm where she would work from 9 a.m. to 9 p.m.

But once she became a mother, that had to change.

She said she and other people, including men, can be as productive in the office for six hours a day and work the rest at home or elsewhere. There are times, she said at home, where she is working at 11 p.m. or getting up as early as 5 a.m. or 6 a.m. to return emails or calls.

Alla Sorochinsky of Cypress Equity said as an employer, she provides a flexible work environment for her 27 employees.

"When you have a great team, both men and women, they are extremely valuable," Sorochinsky said. "The women in my company, I would not want to lose them because they need maternity leave or they need to leave at 3 p.m. to go to a doctor's office."

Sorochinsky said today more companies have a culture that is offering flexible work schedules. Sorochinsky said she has a friend who works for a company that allows flexible hours. Her friend, a mother of a teenager, said she is thriving at her work and getting promoted.

"Because they are just focusing on the work product," Sorochinsky said. "Not where she is doing it or how many hours she is staying at work. It would be nice to see other companies follow that ... We have technology. Why can't we have a flexible work environment? This benefits not only women but men, too."

Check out some of the photos of the Los Angeles Power Women event here: 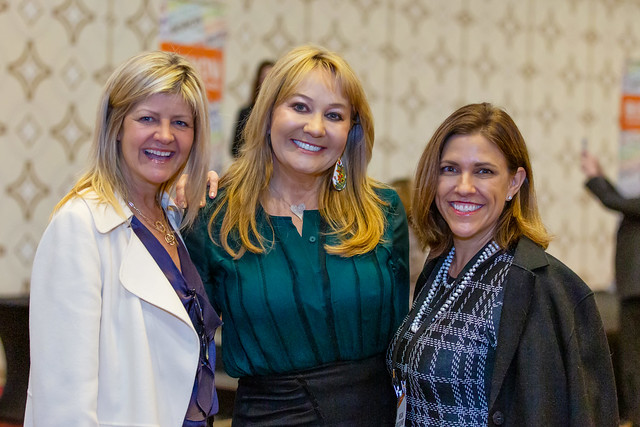