Imagine walking into a store, its shelves empty. But through an app on your phone, you could see several products virtually come to life as if you were looking through the aisles of a traditional retail store.

Three-dimensional racks of clothes pop into existence. Wave your phone over another area and a computer-generated box of Tide laundry detergent appears on the floor. Wave it over a different area and other products come into sight.

Click on the products and it can take you to a website where you place items in a shopping cart. Upon checkout, the items can either be delivered to your home or bagged and waiting as you exit the store. 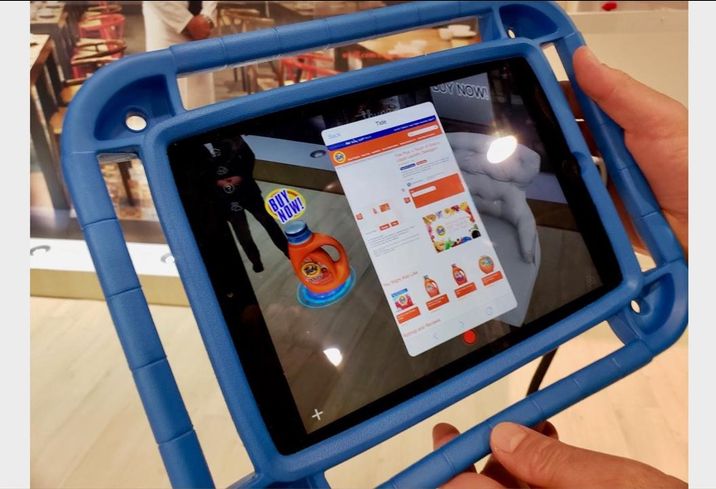 Bisnow/Joseph Pimentel
Thyng CEO Ed LaHood demonstrates environmental-based augmented reality by holding up a smart tablet over the floor where a digital overlay of a Tide detergent product appears. When customers click on the digital product, it takes them to a website where they can order it.

This is just one of many examples of the possibilities of augmented reality, or AR, in the retail space. AR is a type of technology that allows a user to see a 3D virtual image of an object over a real-world environment.

With the retail industry undergoing a tremendous shift, brick-and-mortar retailers are under tremendous pressure to bring in more foot traffic. Some mall owners are adding water features, art and interactive experiential displays. Others are repositioning shopping malls into mixed-use destinations with hotels, apartments and gyms.

As more people stay at home to purchase items on their computers, brick-and-mortar retailers are looking at how AR could bring those shoppers back into their stores and shopping centers.

“This is the savior,” Thyng CEO Ed LaHood said while demonstrating how his company is using AR for retailers inside JLL’s booth at ICSC RECon in Las Vegas. “This is the merging of the online experience with the brick-and-mortar. It’s the best of both worlds … and it takes retail to the next level.”

"I think AR is going to impact retail in a way we all really don’t understand right now," JLL President and CEO Retail Americas Gregg Maloney told Bisnow. "But we’ll have to embrace it because when retailers start bringing it into their store, owners and developers will have to bring it into their property."

One thing is clear, Maloney said. There is a huge demand for this technology from users and retailers. 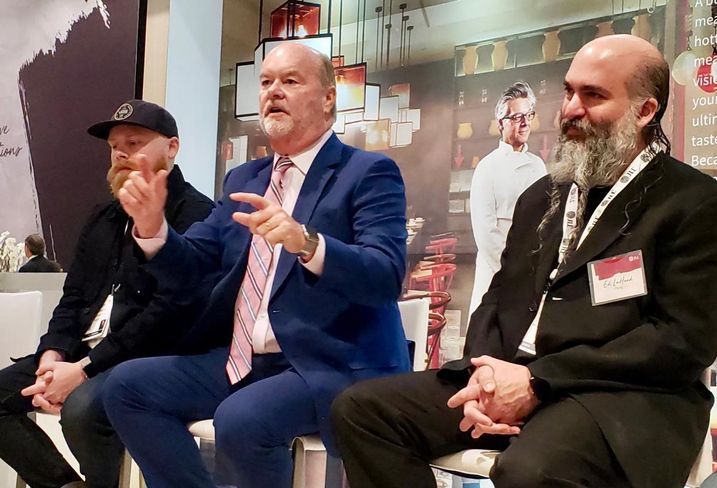 A report conducted by research company Gartner forecasts that, by 2020, more than 100 million consumers will shop using AR online and in-store.

Gartner reports about 46% of retailers are planning to deploy either augmented or virtual reality to meet customers' demand for the technology.

“Retailers are under increasing pressure to explain the purpose of physical stores, and take control of the fulfillment and return process for cross-channel execution,” Gartner Principal Research Analyst Hanna Karki said in a news release.

"I think it’s going to drive sales that we don’t understand right now, but consumers will embrace it," Maloney said. "Once they start to see the benefit of it ... they'll start to apply it to their everyday shopping habits."

Maloney said AR could be a significant game-changer. He estimates AR could potentially be a $133B market by 2021.

Unlike virtual reality, which gives a user a closed-off view of a computer-generated environment while wearing a headset, AR has more real-world practical applications and could fit with retail brands and shopping centers.

Pokemon Go introduced people to augmented reality with millions of people worldwide walking around neighborhoods staring at their phones while trying to catch tiny digital monsters.

But when this technology is applied to retail and brands, rather than seeing and catching tiny Pokemon, users on a phone, smart tablet or headset can see three-dimensional products and have the ability to click on and buy those products. 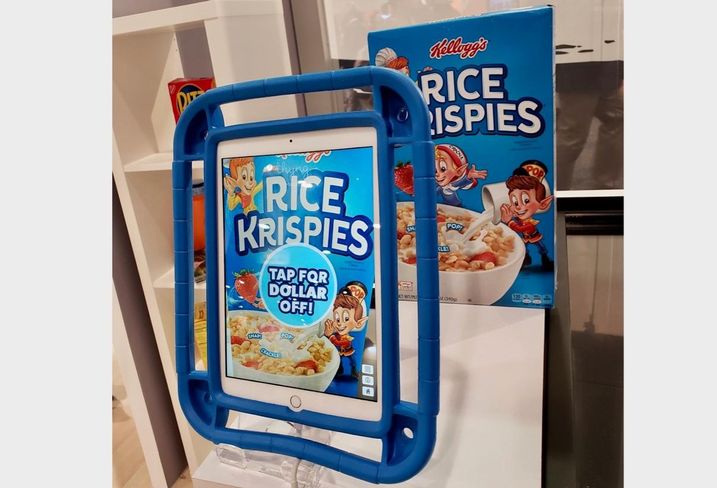 Bisnow/Joseph Pimentel
An example of Thyng's target-based augmented reality feature. By holding up a smart tablet over a product, a digital overlay like an animation, coupon or commercial appears. In this case, a customer can tap on the sign for a dollar-off coupon.

“Because [with AR] you can still see the real world and have that computer-generated information overlay on top of it,” LaHood said. “It becomes a much more powerful technology with lots of practical use cases and opportunities.

"The applications are endless," LaHood said.

With target-based AR, users can place their phones over a box of Rice Krispies and watch Snap, Crackle and Pop, the Kellogg’s animated mascots, come to life digitally. Place the phone over a box of graham crackers and a video of a recipe using that product pops up or a coupon.

When a customer brings the item home, the AR experience doesn't stop, LaHood said. Scanning other parts of the box can unlock different digital experiences and engagement.

In another application, a brand can invite people to the store to dance with a virtual Bruno Mars. Brands can also unlock special in-store deals that can only be revealed using the store or Thyng's AR app.

One mall owner, LaHood said, wants to create a virtual concierge and place this character in different areas of the shopping center to direct people where to go.

“The beauty of this is that it is fully engaging, it is informative and then interactive,” LaHood said. “After each experience at the end, there’s a call to action.”

LaHood said his company is in deep discussion with more than a dozen retailers, brands and mall owners about how to incorporate AR into stores and malls. Because the fundamentals of the technology are already in place, LaHood said the cost for retailers and shopping mall owners is quite affordable. 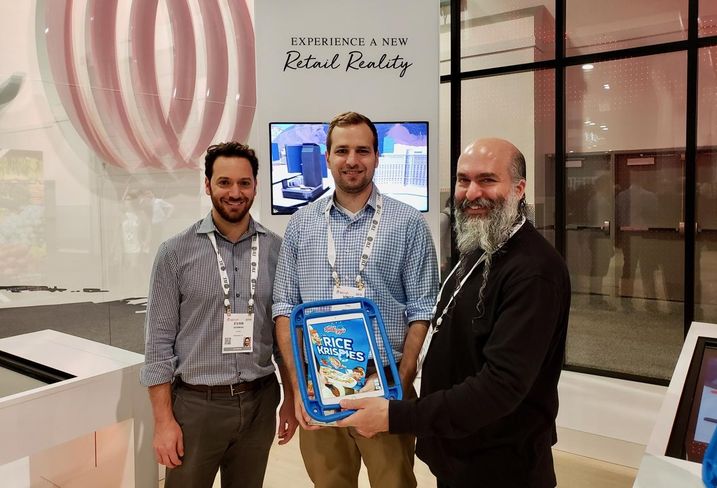 For all the promise AR could deliver to brick-and-mortar stores, one only has to look at the once-popular Pokemon Go, which introduced many to AR technology, to see how just as quickly millions lost interest.

"The reality is Pokemon Go was fascinating and brilliantly conceived [but] they [Niantic, the game developer] weren’t putting out new characters fast enough to keep people interested," he said.

One thing LaHood learned from the Pokemon Go experience is that if AR in stores and malls does take off, the rewards are great.

"If you create an experience that is engaging enough and rewarding enough, you can get millions of people doing it very quickly," LaHood said. "I think the promise of using AR when the equation is correct is an incredible promise for retailers, brands and malls and everybody."

Like most things, AR is going to undergo some growing pains. There will be some experimentation with what will work best for whoever the target demographic is, LaHood said.

"But the potential is incredible," LaHood said.

"The early adopters are the ones that are going to win," Maloney said.