For San Francisco-based Starcity co-founder and CEO Jon Dishotsky, creating co-living developments was just another extension of something he grew up with.

Raised in Palo Alto, Dishotsky, 34, said his father was a Stanford professor who rented out rooms in their home to local college students from around the world. “It was good because the students got a cheap place to live and my parents got inexpensive child care for their kids,” Dishotsky told Bisnow. “The story I like to tell is that we had a student from Nigeria, a 6-foot-8-inch engineer who lived with us and helped me build a zip line in my backyard and helped win every science fair project.”

That type of communal living experience had a strong impact on Dishotsky.

So when he co-founded Starcity, a developer and operator of co-living developments, in 2016, Dishotsky envisioned communities where residents could interact with their neighbors and build close-knit relationships.

Since founding the company, Starcity has opened four co-living developments totaling 52 units in the Bay Area. There is a reported 8,000-person waiting list.

This month, the company in a JV with Worthe Real Estate Group expanded its portfolio with a fifth location in Venice Beach. It is the first co-living building to open in Los Angeles.

The building was previously corporate housing, which Starcity renovated from top to bottom. Dishotsky did not say how much the capital improvements cost.

Another developer, Treehouse Co-Living, is currently under construction on the first ground-up co-living space in Hollywood, slated to open by the end of this year.

“LA is going through a very familiar thing and it's similar to the Bay Area,” Dishotsky said, adding that the cost of housing in Los Angeles continues to rise and is pushing out many locals.

Typical apartments are rented as individual unfurnished one-, two- or three-bedroom units. But Starcity is similar to dorm rooms for adults.

Starcity's Venice location at 29 Navy St., a block from the beach, features 31 total rooms, including studio and one-bedroom units and four-bedroom shared units, all fully furnished. The building was formerly corporate housing. The rates range from $2,100 to $3,200, which includes WiFi, utilities and community amenities.

A similar studio or one-bedroom unit in Venice Beach would start at $2,800 and go up to as much as $4K, not including utilities, Dishotsky said.

What sets co-living developments apart from their multifamily counterparts are the shared spaces and communal activities. During renovation at Starcity's Venice location, construction workers had knocked down walls to make some units larger. The rooftop was completely redone and had custom-made wooden lounge seating, a dining table and a barbecue area. The basement was also being renovated as a community gathering spot either as a music studio or a community kitchen.

The site will have weekly Sunday supper on a rooftop deck overlooking the beach and the Pacific Ocean, music sessions, morning yoga classes, a surf club and game nights. When other Starcity locations open in the city, residents will be able to join in activities at those other locations. 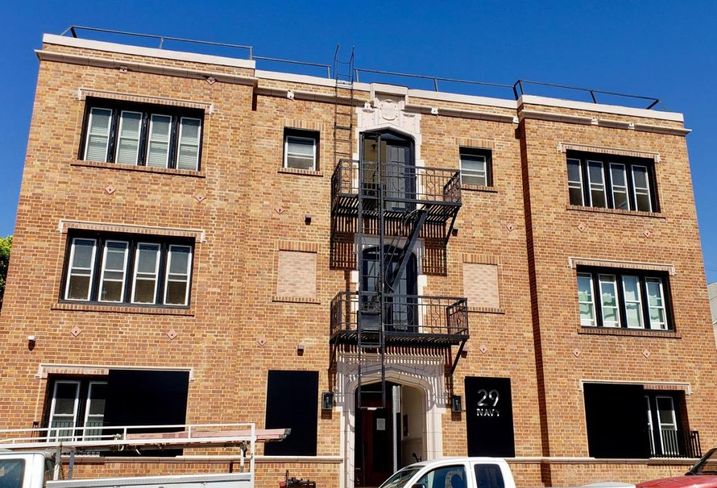 “There are two sides to the market — it’s either affordable Section 8 housing or luxury units. There’s nothing in between or for the middle class,” Dishotsky said.

“Our focus is bringing units back to the locals,” he said.

Dishotsky said the Venice location is the first of many co-living projects Starcity plans to open across California.

The company has raised more than $20M in the last 18 months. It has opened an office in Venice and is hiring.

“We are just getting started,” he said.