The $1.2B, 2M SF Angels Landing Site In Downtown Los Angeles Will Only Have 465 Parking Spaces

What it will not have is significant parking.

Business and commercial developments are required to have one parking space per 1K SF for buildings of 7,500 SF or more.

The audience of 250 or so commercial real estate professionals gasped upon hearing Pagan’s bold underparking plans.

On a given day, when Angels Landing opens sometime in 2024, Pagan said he estimates thousands of people would come in and out of the development.

But the Angels Landing Partnership is preparing the site for a car-limited and car-less future in downtown.

“The story is very clear we are looking to drop it to a point to force people to use the [other] systems instead,” Pagan said referring to public transportation or ride-sharing. “We will still be able to park you into your condo, hotel and school without any issues but we will do it in a way where we are not overdoing it.”

“It is going to be about walkability, mobility and ride-share services,” Pagan said.

The Los Angeles City Council named Angels Landing Partners to manage development of the Angels Landing site, a 2.24-acre area in Bunker Hill at Fourth and Hill streets. Handel Architects is tasked with overseeing the design. OLIN is handling the landscaping.

Pagan said because of the land’s terrain (it sits on a 43-degree angle), building a parking structure would be difficult and eat up too much space that would be better served for commercial or retail uses.

Pagan said for those preferring a car, an efficient valet system and ride-sharing is the key. He is planning to design a dedicated loading and drop-off zone and an area with electric car charging stations specifically for ride-sharing vehicles to wait.

“Right now, you need a phone and to stop on a corner to get picked up,” Pagan said. “But what happens if you lose your phone or if it’s not charged? We’re going to put some kind of service station so people could just tap and go.”

He said he is already in discussions with major ride-sharing companies to possibly service the area but the development is still in its early stages.

Pagan, a native New Yorker, said he knows underparking Angels Landing would benefit the future of downtown Los Angeles. People need to exercise and move and are tired of getting stuck in traffic and gridlock or wasting an hour or two to get to and from work.

“That’s the problem,” said Pagan, who travels an hour to an hour and a half to work in downtown from his home in Arcadia.

“I know it’s going to take the people of LA to get used to this model but the thing is the city is heading that way,” he said. “It doesn’t make any sense and people are getting tired of [being stuck in traffic]. I think that even though people are used to that and that’s the lifestyle here, I think eventually they will be forced to either deal with the gridlock or giving it up a little.”

Check out more photos of the event here: 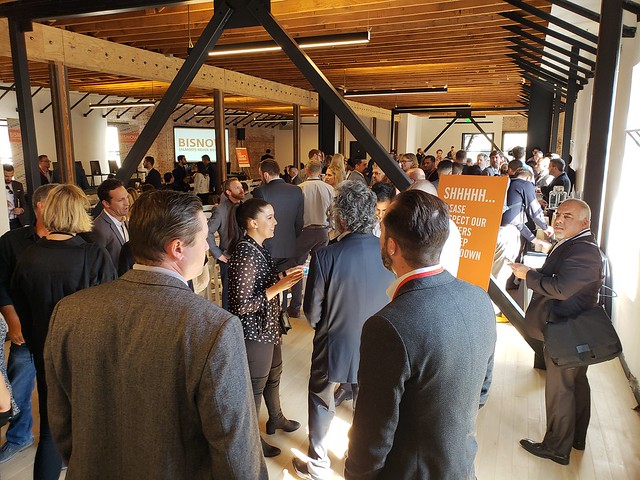