Developer Wayne Ratkovich has famously restored 17 historic landmarks since 1977, but this is the first time, he says, that he’s trying to create one. Your publisher paid a visit. 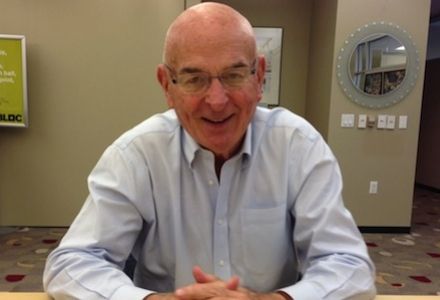 We snapped Wayne in his temporary office at the 1.8M SF old Macy’s Plaza at 7th and Flower, which he bought in June for $241M. Wayne says it was a shabby complex that he remembers from 30 years ago only because it’s where an optometrist told him for first time in his life he needed glasses; no one ever went there, he says, unless they had to. And it only got worse over the years. Now he plans to give it a big rehab, retail renaissance, and make it the “center point of LA.” 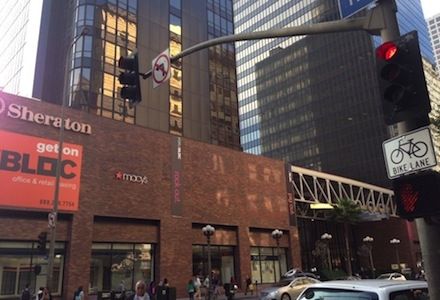 Wayne loves where it’s located, right across from the second biggest subway station that will be able to bring visitors in from Long Beach, Santa Monica, and the Valley. With financial partners National Real Estate Advisors of DC and Blue Vista of Chicago, he’s planning to spend $160M for changes and “more if necessary.” And with his usual marketing flair, he’s renamed the whole thing “The Bloc.” 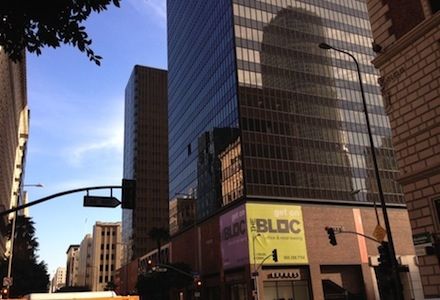 The structure was built in 1972 by architect and developer Charles Luckman, and Wayne bought it from Jamison’s David Lee. There are 495 hotel rooms, 757k SF of office, a 240k SF Macy’s, 115k SF of retail, and around 2,000 parking spots, some of which, Wayne says, they’re still finding. 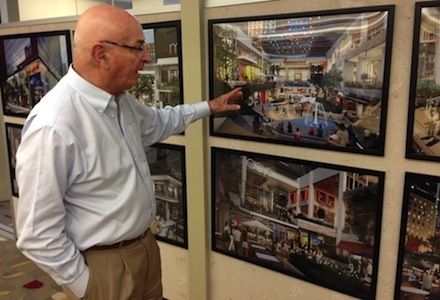 Retail is key, Wayne says. They’ll expand the shops to 150k through conversion of storage and office and use innovative Studio 111 as project architect. He admires design in “pre-automobile cities” and mentions S.F.’s Ferry Building, Boston’s Faneuil Hall, and Baltimore’s Inner Harbor as potential models. And, he smiles, “We’re happy to steal all ideas we can from Rockefeller Center and Time Warner.” 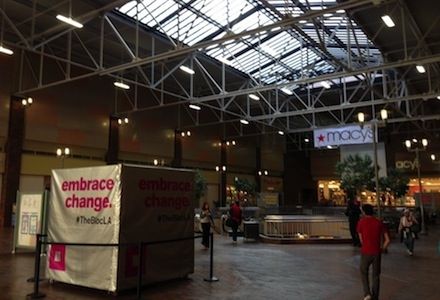 The current atrium entrance is likely to be replaced by a warm and inviting open air courtyard where art, music, and food festivals could be staged and, Wayne says, the UCLA football team and fans could gather before a big game with USC. 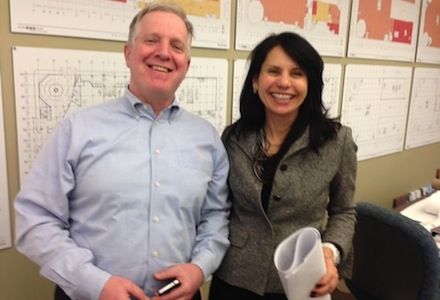 Running retail is Brian Cornelius, who was recruited, among 10 new hires for the project, from Caruso Affiliated. Mary Anderson is in charge of hotel plans. On the retail wish list: stores like Paul Smith, J Crew, West Elm, and the sort of Todd English food hall found at NY’s Plaza hotel, plus five or six fast-casual to fine-dining restaurants. 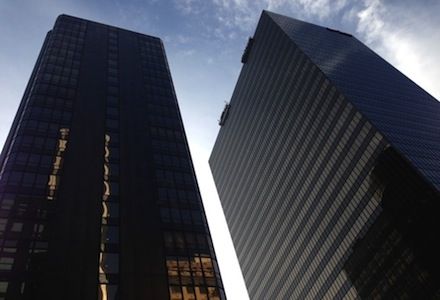 On the left in Wayne's complex is the Sheraton Hotel, which he says will remain as a Starwood property but be dramatically upgraded to four stars including a gut renovation two floors at a time so it stays in operation. On the right are the offices that are only 50% leased. Work will start in Q2: McGuire Construction is doing the hotel, and Webcor the office and retail. Brokers are from CB: for office, Jeff Pion, Darren White, John Zanetos; for retail, Scott Kaplan, Richard Risika, and Mitch Hernandez. 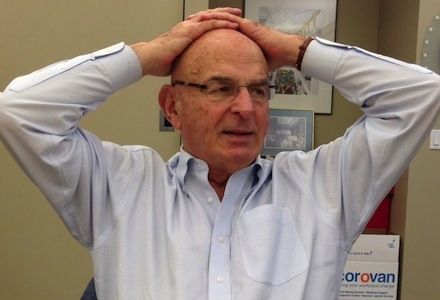 One change they’ll start with is creating their own office on the 26th floor as a showplace to give potential tenants a taste of what’s possible. Wayne is all for the latest in collaborative space: 12 to 14-foot ceilings and exposed pipes, concrete floors, few private offices, LED lighting that softens the building exterior, and overall design that gives it human size and connects it to the streetscape. Already he’s changing the uniforms of parking attendants, security, and maintenance personnel from gray pants, blue blazer, and white shirt to something less formal. 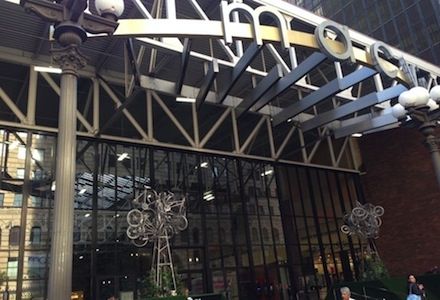 While he’s never done a hotel, and rarely deals with non-historic buildings, Wayne cites 5900 Wilshire as a parallel for his Macy’s work: It, too, was in serious disrepair when he bought it seven years ago. It had 16 elevators that all had to be redone, and he also made his office there a showroom. 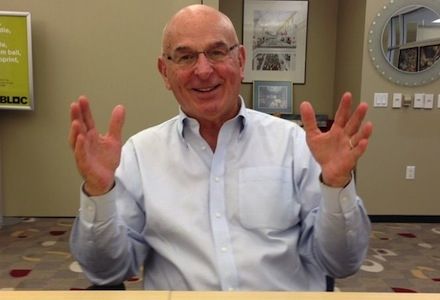 Wayne is on a mission to “urbanize, humanize, and energize” The Bloc. Yes, he has other projects going on (5900 Wilshire, Alhambra, Ports O’ Call, and Hercules, where son Milan has become point man). But he’s concentrating a lot of effort on this one. If he can take a large and forgettable eyesore and make it exciting and game-changing, it can become the signature legacy even of a man who has already  had such memorable impact.