Meta Housing Corp., in a JV with Western Community Housing, has broken ground on a 72-unit, transit-oriented, affordable multifamily development in Los Angeles. 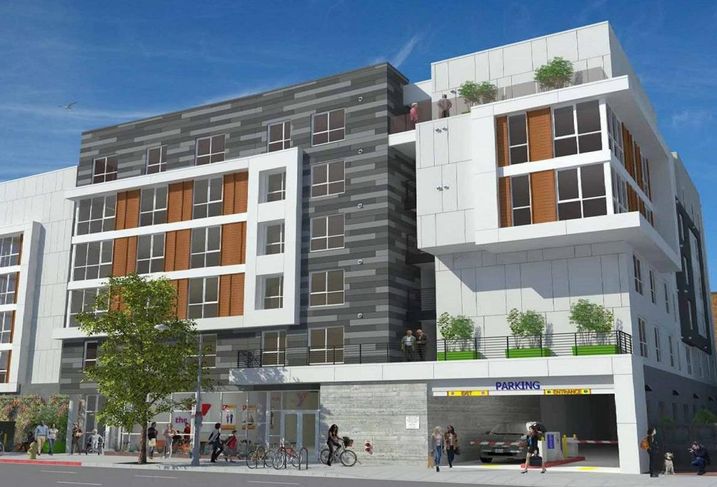 The $51.4M Vermont Corridor Apartments, a six-story senior and permanent supportive housing community, is at 433 South Vermont Ave. in the Koreatown neighborhood. It is near the Metro Purple Line and neighborhood amenities, such as a grocery store, a medical clinic and public schools.

Seniors living in the community will earn between 25% and 60% of the area median income. Of the 72 units, 36 will include supportive services through Los Angeles County's Measure H, and residents experiencing varying levels of homelessness will have subsidized rents. Those units were built with funding from the city's Proposition HHH and a partnership with the Housing Authority of the City of Los Angeles, the Los Angeles Housing and Community Investment Department and the county.

The 113K SF project includes a 12,500 SF community center on the ground floor dedicated to the YMCA.

“The Vermont Corridor Apartments project is a promise fulfilled,” Los Angeles Supervisor Mark Ridley-Thomas said in a statement. “For Koreatown residents, it provides not only affordable homes to seniors who need it most, but also a long-awaited community center with a wellness center to be operated by the YMCA. Working with Meta Housing and Western Community Housing, as well as the city of Los Angeles and other partners, we have repurposed an aging Los Angeles County facility and transformed it into a beautiful new asset for the community. That’s public-private partnership at its best.”

The project is expected to be completed in March 2021. 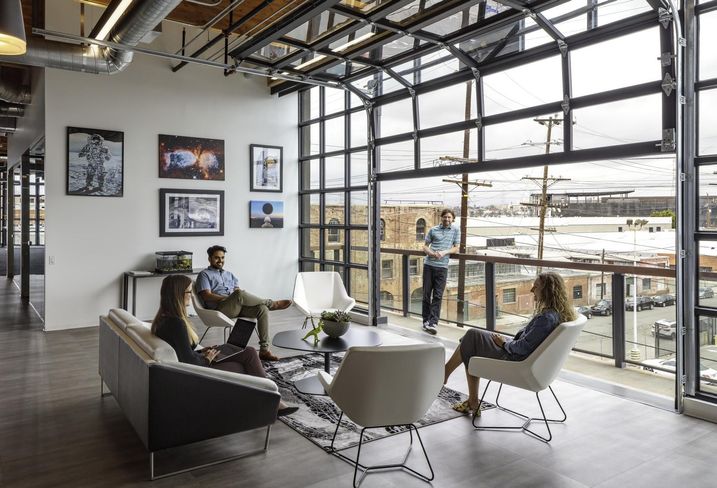 Construction of the new Soylent corporate headquarters is now complete in the Los Angeles Arts District.

The 27K SF HQ for the food technology company is on the third floor of Building 2 at the At Mateo campus. The company is relocating from its previous LA location.

At Mateo is a mixed-use development from Blatteis & Schnur Inc. with creative office and retail and restaurant space. It opened in early 2018.

The new headquarters has open offices, breakout rooms, a sample room, a game area and lounge spaces with tiered seating for meetings. Private offices are around the perimeter, with 10-foot-high glass walls. There are operational windows, roll-up doors and a rooftop patio for employees.

The headquarters also includes the Soylent Innovation Lab, a coworking space designed to attract other innovative tech companies to the Arts District.

Ware Malcomb provided interior architectural and design services for the project. The general contractor was HBC.

“This new headquarters provides an engaging atmosphere for Soylent employees that truly embodies the company’s innovative and collaborative corporate culture,” said Radwan Madani, principal of Ware Malcomb’s Los Angeles office. “It has been gratifying for our firm to have the opportunity to work on so many exciting projects — like this one for Soylent — in the burgeoning Arts District of downtown Los Angeles.” 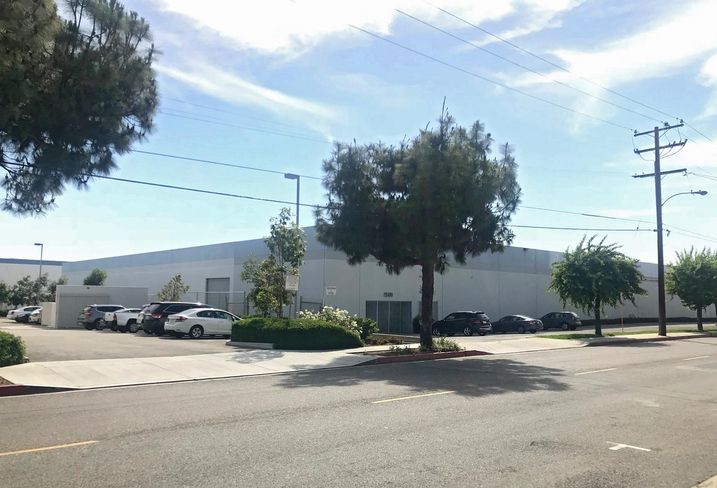 Art Weiss Industrial Properties has sold a 64K SF industrial warehouse in the City of Industry for $11.53M to Max Sales Group, a wholesale manufacturer of a variety of products.

The property at 15240-15250 Nelson Ave. went up for sale with about a year left on its in-place leases, Daum Executive Vice President Charles Johnson II said. That allowed Daum to find a buyer looking for a well-positioned warehouse to meet its growing needs.

The warehouse has 24-foot interior clearance, nine loading docks, two ground-level doors, 4K SF of office and the option for a two-tenant layout.

The Mogharebi Group has completed the sale of the 32-unit The Groves Townhouse Apartments in Riverside for $5.9M, or $184,375/unit. There were multiple offers for the property, which is a two-story building of all two-bedroom townhomes on Magnolia Avenue and totals 33K SF.

TMG's Alex Mogharebi and Otto Ozen represented the seller, a private investor based in Orange County, and the Riverside-based buyer.

The Mogharebi Group sold the Bernadine Senior Independent Living property in Ontario, a 71-unit community at 363 East Gilbert St. The property sold for roughly $6.76M, or $95,423/unit, to a private investment group based in Los Angeles.

A West Hollywood apartment building with four units sold for $1.95M, or $561/SF, which was above the market average. Los Angeles-based investor Rangely Partners LLC purchased the property at 8904 Rangely Ave. Kidder Mathews broker Michael Monempour represented both Rangely Partners and the seller, a private investor. The building is in the Norma Triangle neighborhood. 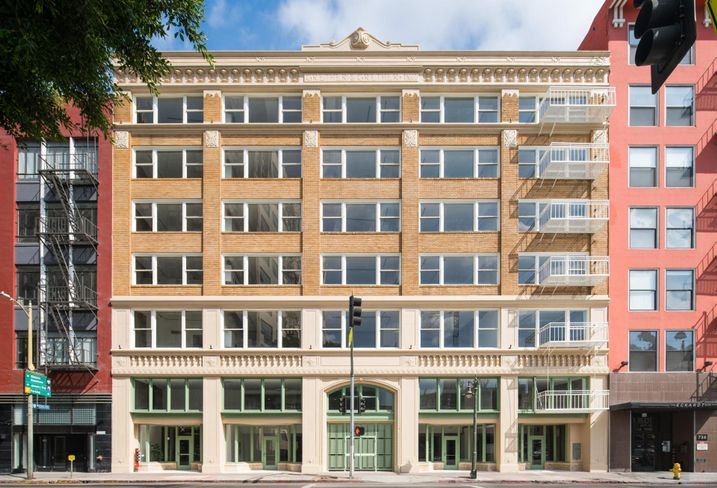 The property at 732 South Los Angeles St. was built in 1924 for dry goods manufacturing. Duns Capital acquired the building in 2013 and converted it to a residential building with 72 loft-style apartments and nearly 15K SF of retail and office space.

Marcus & Millichap Capital Corp. has arranged $50.5M in capital to refinance two multifamily properties in Southern California. A $27.5M low-leverage loan of 55% loan-to-value was used to refinance a 136-unit property in Orange County. The loan was structured with five years of interest-only payments. The second loan, for $23M, refinanced a 69-unit property in Los Angeles. That loan was leveraged at 65% and structured with a five-year fixed interest rate.

The deals involved properties Continental Partners had previously arranged acquisition bridge loans for on behalf of the same two borrowers, both private investors.

For the three-property multifamily portfolio, Continental Partners secured about $9M in refinancing. The portfolio contains 41 units in South Los Angeles. The refinancing for the 105K SF industrial building in Moorpark was for $6.8M. Both were cash-out refinancings. 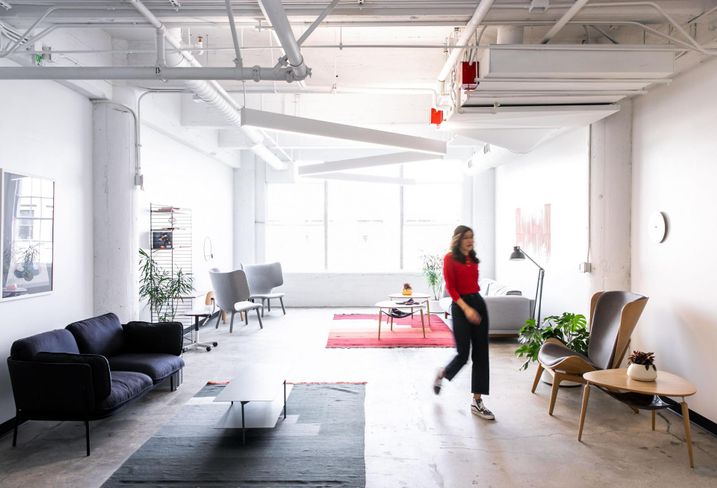 Carey P. Levy has rejoined Irvine-based Passco Companies Development as president. Levy was previously president of Passco Cos.' development arm from 2007 to 2013. He will be responsible for overseeing development and value-add repositioning acquisitions, entitlements, construction and financing on a national scale across multiple real estate asset types. Levy has more than 30 years of experience in the commercial real estate investment and development industry. He will be based out of the company's Irvine headquarters.

Gardiner & Theobald, a global independent construction and property consultancy, has moved into its 7,100 SF creative office space at Row DTLA.

The firm moved from its Beverly Hills offices into downtown LA, where it is consulting on more than 30 acres of development projects in the Arts District and central core.