Be bold. Be aggressive. Don’t apologize. Do what you need to do.

These were the words of advice from high-ranking executive women in commercial real estate to other women working in the field and those seeking to join the mostly male-dominated industry.

“We still have a long way to go in terms of getting more women in the commercial real estate industry,” Allen Matkins partner Julie Hoffman told the crowd at Bisnow’s SoCal Power Women event at the LA Grand Hotel in downtown Los Angeles. “But with events like these, we will continue to build our momentum and hopefully empower more women in the future.”

More than 250 people attended Bisnow’s SoCal Power Women event, an annual celebration of leaders in the commercial real estate. Bisnow recognized and honored 40 women across Southern California. The women are lawyers, brokers and developers. They are presidents of successful companies and partners of law firms and understand their role as trailblazers for the next generation.

The women discussed their struggles and overcoming obstacles in the commercial real estate industry and how they could support one another.

The honorees are leaders in their fields. They are also mothers, sisters and wives, and striking a work-life balance can be challenging, Hoffman said.

Hoffman recalled a conversation she had several years ago with a male colleague who had asked her to stay late for a project. Hoffman recalled she couldn’t stay late because she had to take care of her ailing dog. But the former colleague was perplexed by her situation.

She said he didn’t realize she had other responsibilities outside of work.

“It was like it hadn’t occurred to him before that I didn’t have a ‘wife,’” Hoffman said, as the crowd chuckled.

“It wasn’t always that way, for a long time, men had stay-at-home wives and the few women in the workplace couldn’t be really open to their other responsibilities,” Hoffman said.

She cited the struggles of U.S. Supreme Court Justice Ruth Bader Ginsburg and how, early in her career, most firms didn’t want to hire her because she was a mother, and she couldn’t discuss her personal struggles.

Hoffman said her conversation with her colleague was trivial but “it underscores the point that whether you are single or married, male or female, you have other responsibilities outside of work that you have to attend to and sometimes you have to remind people of that.

“The conversation was actually a gut-check for me because I felt bad,” she said. “He didn’t push back … but I felt like I had to apologize to him for leaving early.”

She said women have a harder time finding that balance, but it is important to do.

Hudson Properties Senior Vice President Kay Tidwell joked that there are more white men at a real estate conference than there are at a Jimmy Buffett concert.

“In real estate we certainly have a gap and there is no way to pretend that there isn’t. A lot industries are suffering from this as well,” Lee said. “We have significant problems. I don’t think things have changed that significantly in the last 20 years. The biggest and most promising thing we can do is to have forums like these and to honor women and bring people out of the shadows who have been working out of their firms for decades.”

Lee said women need to keep the attention going on wage and management discrepancies, implicit bias and opportunity gaps so employers and their competitors pay attention.

“The onus is on all of us to bring attention to those things,” Lee said.

Watt Cos. President Nadine Watt said it is important for women to support one another and create awareness of the issues that affect them in commercial real estate.

"We are paving the way for the next generation," Watt said.

Check out a slideshow of the SoCal Power women event here: 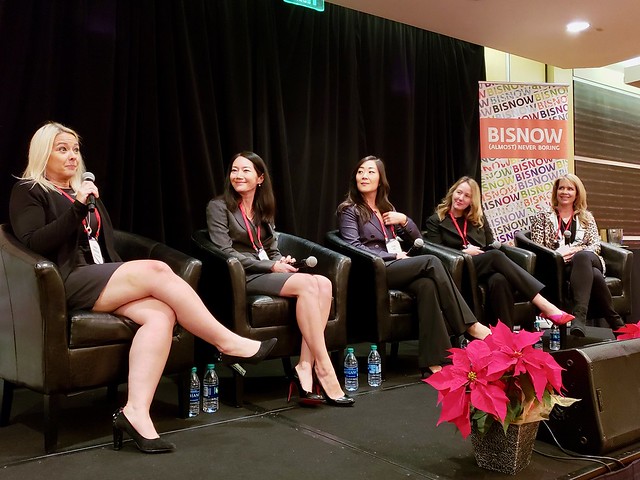