There may not be a retail development like Coal Drops Yard anywhere else in the world.

Three months ahead of its opening in October, the 100K SF scheme — part of the 67-acre Kings Cross Central scheme — is coming toward completion. The mix of sweeping modern curves, concrete and historic architecture designed by hip Heatherwick studio and realised by developer Argent is taking its final shape and is nearly 75% leased. Among other retailers, Samsung has just signed to occupy 20K SF in the development’s flagship store for a futuristic “digital playground”.

Behind this success is the story of a difficult journey that takes in 19th century industrial Britain, post-industrial rave culture, the financial crisis and a retail sector that is evolving daily. Innovative thinking was needed to overcome the pressures of a distinctive but challenging site. What has emerged is a scheme that, if it proves a success, could provide a template for urban retail for decades to come. 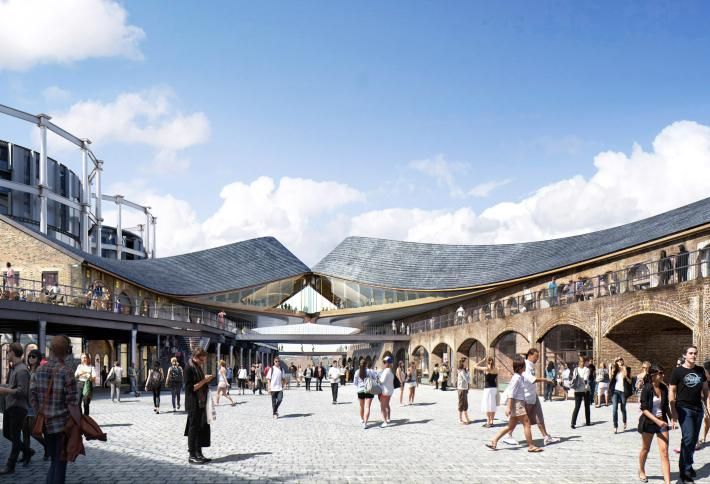 Courtesy of Argent
The central space at Coal Drops Yard

Bisnow took a tour of Coal Drops Yard with Argent partner and Head of Asset Management Anna Strongman, who will be speaking at the upcoming Retail Revolution 2018 event, to get under the skin of a development with 160 years of history.

Argent took vacant possession of this part of Kings Cross Central in 2007, and its life prior to this moment is the history of London in microcosm. Coal Drops Yard gets its name from the fact that when built in the 1850s it was London’s coal depository. Trains bearing coal would arrive from the North, drive inside the buildings and deposit coal. The floors of the two main buildings used to slope up as a way of bringing the trains to a halt.

The arches of Lower Stable Street, one element of the current scheme, housed hundreds of horses that were then used to deliver the coal that fired the Industrial Revolution in London.

As the age of coal and steam gave way to electricity, the buildings were repurposed as warehouses and for industrial uses, but as the industrial age came to an end in the 1980s this use fell away and, along with much of the Kings Cross area, the coal yards became derelict. 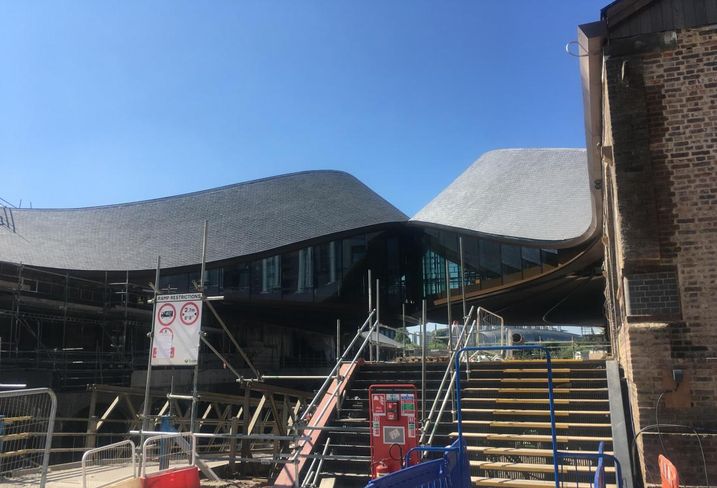 In the 1990s the former coal yards found a new use as nightclubs, principally Bagley’s Studios, which opened in 1991 and was one of the biggest clubs in London — with six rooms playing different strands of house and techno at the famous nightclub Freedom.

When Argent and then fellow owners LCR and Hermes took over in 2007, the scheme was in a somewhat different financial position, what with the credit crunch just getting underway. It was decided that there were better uses for limited funds than clearing out the former clubs, with the floors remaining littered with VIP passes, fake plastic pot plants and other club paraphernalia for years, Strongman said.

“We always knew it was a great opportunity, but it was never a slam dunk,” said Strongman who, having joined Argent 10 years ago, has worked on Kings Cross Central in its post-financial crisis incarnation. It is now majority owned by pension fund AustralianSuper.

Kings Cross Central is now a huge success as an office destination, with a 1M SF office for Google under construction, global brands like Universal Music and Havas already in occupation and Facebook rumoured to be in talks to take at least 400K SF at the scheme. 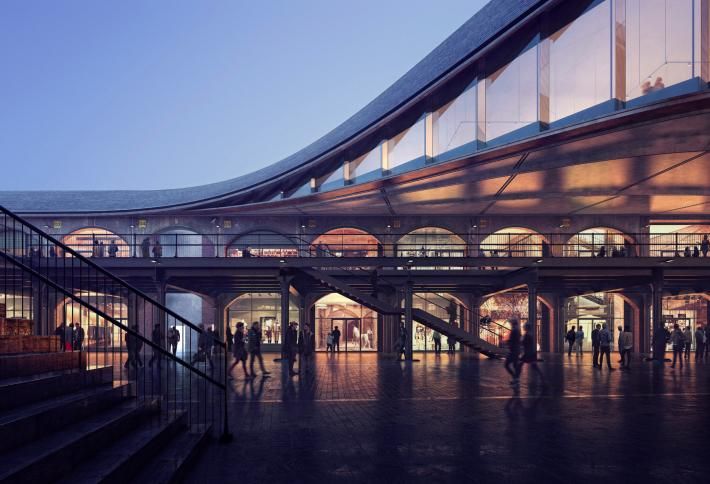 These occupiers have been drawn by the buzz created by the scheme’s first tenant, Central Saint Martin’s art school, as well as the numerous cool restaurants like Caravan, Granger and the German Gynasium.

There are some big-name retailers on the scheme like Nike, H&M and And Other Stories. But Coal Drops Yard is the retail centrepiece, and in many ways a defining part of the entire scheme. How to position the scheme and when to build it were not simple questions.

“There’s a catchment already here, and you need to appeal to that catchment, but you want to make it a destination as well,” Strongman said. “At 100K SF it’s too big to be a neighbourhood centre, but you can’t compete with destinations like Oxford Street as you just don’t have the scale.

“It’s an interesting proposition and has a big influence on the rest of the estate. Build it too early and you don’t have an audience here; build it too late and you lose the opportunity to influence the narrative of the whole estate." 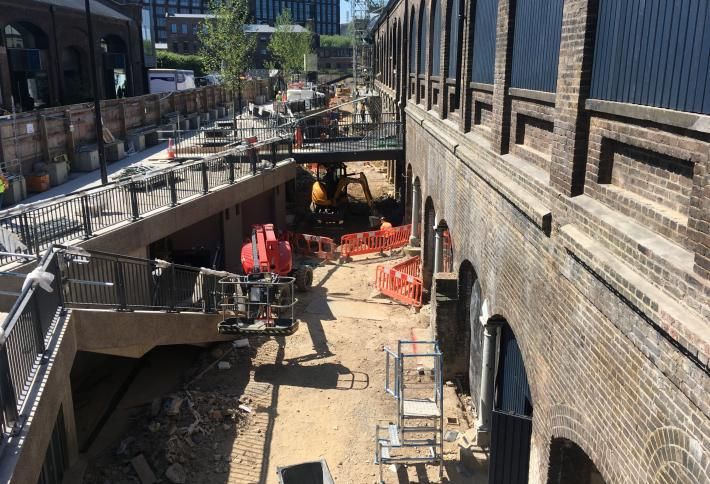 Strongman said Argent has tried to be as inclusive as possible and to provide something for everyone in the project, not just pricey brands that would appeal to wealthy tech workers. While most developers of new urban retail schemes have worked out that today you need to mix big name brands with independent retailers, Argent has gone a step further.

Global names like Samsung will be present along with several collectives made up of independent retailers, artists and musicians. Lower Stable Street, which comprises smaller units, will be given over to these smaller retailers and collectives, many of which will undertake events like product-making workshops with local schools.

“Because you’re creating a retail destination from scratch, you have to be creative with the tenant mix and where you position the business plan,” Strongman said. “We want to be accessible, so having someone like Samsung is great because everyone has a phone. But we want smaller, unique brands as well, and to have something at every price point.”

Tenants will take smaller units on tenancies ranging from six month licenses to three year leases, and Strongman said that while they would not be free, rents on smaller units would be low and could be linked to turnover. She said that rather than looking at individual rent levels, Argent tried to look at the value to the estate as a whole. 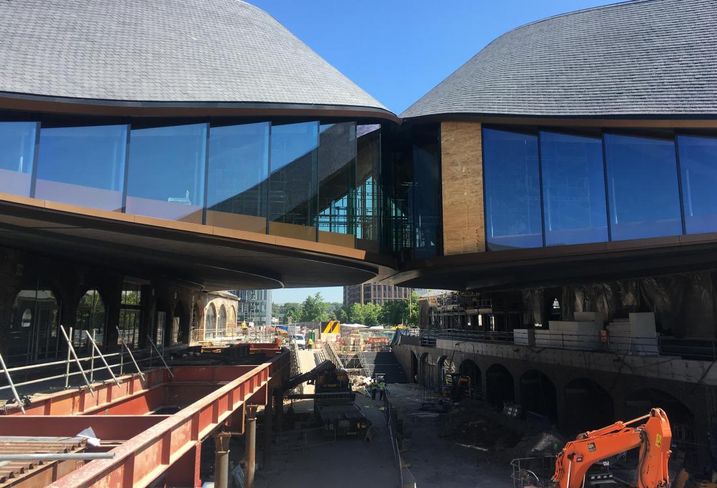 “If you looked at every store on a singular basis then you would lose a lot of those interesting brands,” she said. “We look at things in a wider context and believe having the right levels of rent provides value for the whole estate. The investors understand it and it gives you a group of retailers that people want to come here for.”

But against the prevailing retail wisdom that larger brands only want large flagship stores, Strongman said that some well-known names had been interested in the scheme’s smaller units.

“A lot of retailers don’t want to just open another massive footprint store,” she said. “They want to grow their audience and access new audiences. They are doing that online, but they want to have a presence here and be part of that creative mix.”

So far 75% of the scheme, which comprises 55 stores, is leased or in legal due diligence, and retailers that have been announced include Paul Smith, Tom Dixon, Cubitts, Manifesto, Cheaney, Form + Thread, Lost Property of London, Emin & Paul, Beija London, Le Chocolat Alain Ducasse and Universal Works — as well as restaurants Barrafina, Casa Pastor and wine bar The Drop. 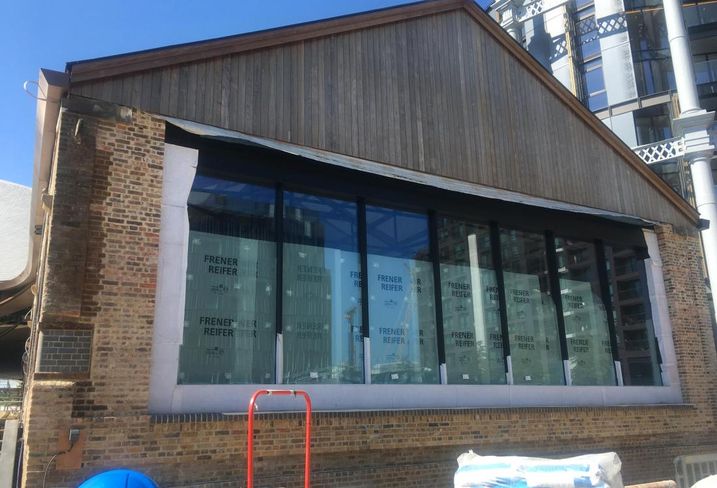 Strongman said that part of the next wave of announcements would be more service-based tenants in the grooming and beauty world such as barbershops, beauty salons and a tattoo joint.

There will also be an online retailer announcing its first physical store in one of the larger 12K SF units in the coming weeks, a store that will be split into three levels and also will include a café. 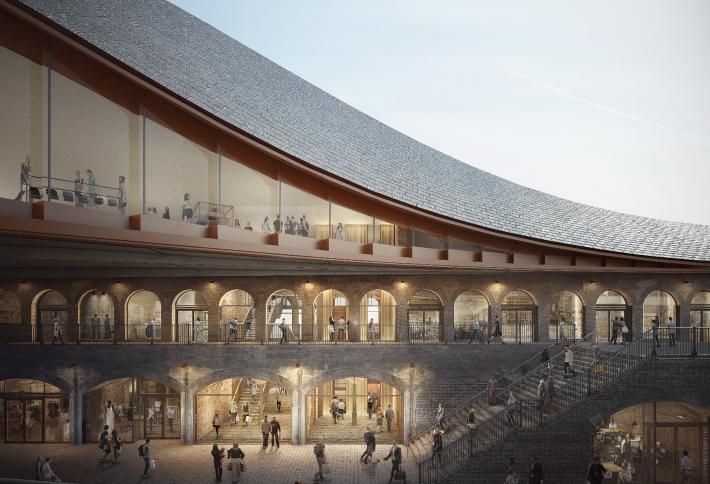 The physical structure of the scheme was both an asset and a challenge — increasingly developers love sites with history and character that can be incorporated, but this was no easy feat.

Stongman likened the two main two-storey buildings of the site which run parallel to each other like “two fingers of a Kit Kat” with the challenge being how to avoid things being too boring and linear, and also how to create site lines and ways of getting visitors between the two levels.

She said that Argent had included five lift cores to improve accessibility between the levels, and cut away some of the historic balcony on one side of the upper level to improve site lines and make the central area between the two main buildings feel like more of a large public space; this meant reducing the potential leasable floor space. 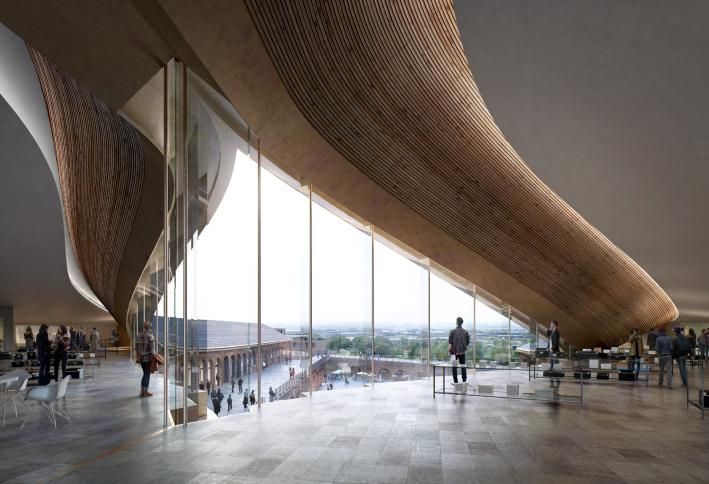 That central space can now be used for retailer-led events and events based around music and culture. Bridges link the two parallel buildings.

To avoid having retailers operating out of identical arches, Strongman said Argent and Haetherwick added variety by designing five different types of the retail fascia. Lower Stable Street retains some of the historic cobbled paving and original ironwork alongside more modern concrete designs from Heatherwick.

Then there is the central 20K SF space that will be occupied by Samsung, with two curved roofs that sweep up together, like the two sides of a mustache that a 19th-century train driver might have sported. 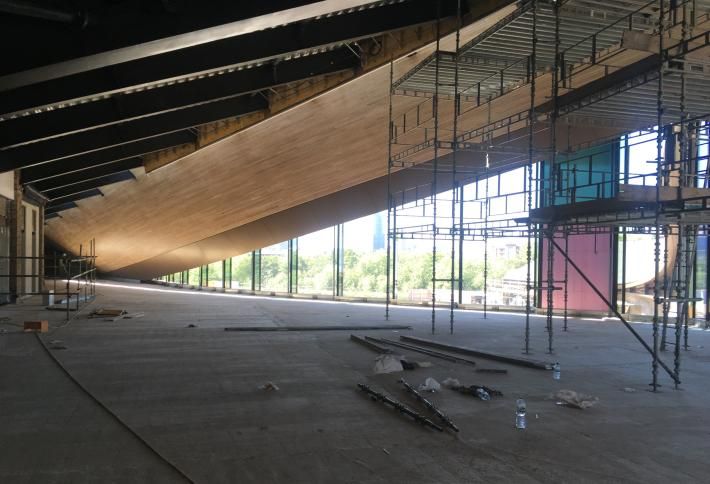 Inside the space is equally striking, with the two roofs curving up to meet in a kissing join, and huge windows letting light pour in.

“Once people were able to come in and see the space rather than just imagining it, it made it a much easier sell,” Strongman said.

With three months to go, the general public won’t have to use their imaginations for much longer either to see a retail scheme 160 years in the making.

To hear from Strongman and other bleeding edge retail names come along to Bisnow's Retail Revolution 2018 event on 12 July at 7.30am.