The Walkie Talkie Seems Like A Sure Thing Now, But It Almost Didn’t Happen

It just sold for the highest price ever for a U.K. office building, so the Walkie Talkie seems like a slam dunk of a development now. But it was not always that way.

The now-iconic building has a long and winding backstory that epitomises the fluctuating fortunes not just of property but of the City of London over the past 10 years. 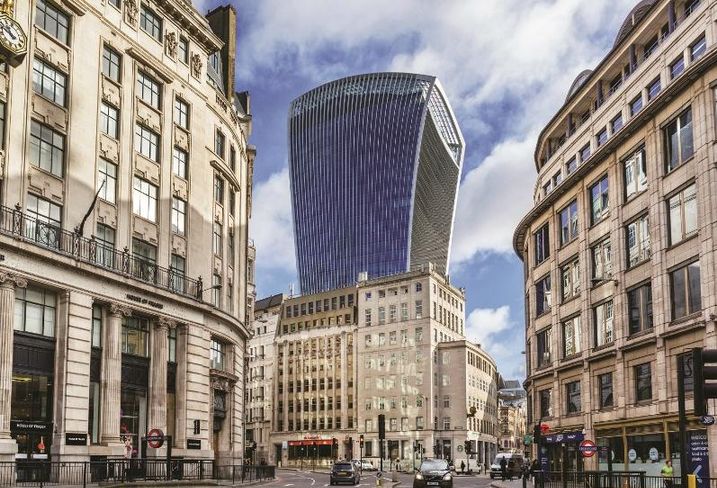 Back in 2010 it was not certain whether the Walkie Talkie would be built at all. The owner of the site at 20 Fenchurch St., Landsec, had put the development on hold in December 2008 in the wake of the collapse of Lehman Brothers. It had received planning consent for the 34-storey, Rafael Viñoly-designed tower in July 2007, the very peak of the last boom.

The scheme stayed mothballed as the credit crunch raged and developers in London tried to figure out whether demand in the City of London would ever rebound, or if financial services tenants were in permanent retreat.

In February 2010, Landsec, under the leadership of former Chief Executive Francis Salway, decided to press on and restart construction of the building.

“The group’s decision to go ahead with 20 Fenchurch St. in 2010 was not met with universal support, and that is putting it mildly,” JP Morgan Cazenove analyst Tim Leckie said last week.

Landsec started the construction process without a cornerstone tenant in place, leading shareholders and commentators to question whether it was being overly bullish on the prospects for the City market.

Behind the scenes Landsec was looking for a joint venture partner to share some of the risk of the development and give it surety to continue without a pre-leasing deal. Without one of those, it might not have committed to the development when it did.

The counterfactual can be found in the nearby 22 Bishopsgate, the 1.4M SF office tower development that lay dormant for more than seven years after the core was built up to four storeys, earning it the nickname “The Stump”. It was on ice for so long because it could not find a pre-let or a financial backer and missed the ideal development window when London and its office rents were recovering.

Landsec landed its backing in October 2010, in the form of an unlikely consortium born out of a distressed debt deal.

A year earlier, Canary Wharf Group, the developer of the huge office and retail estate in East London, needed bailing out as it came close to being unable to repay a maturing £880M loan from Citigroup.

The loan was repurchased by a consortium made up of a fund managed by Morgan Stanley Real Estate Investing, Qatar Holding and diamond magnate Simon Glick — already shareholders in Canary — plus China Investment Corp. All took stakes of varying sizes in Canary in exchange for clearing the debt. 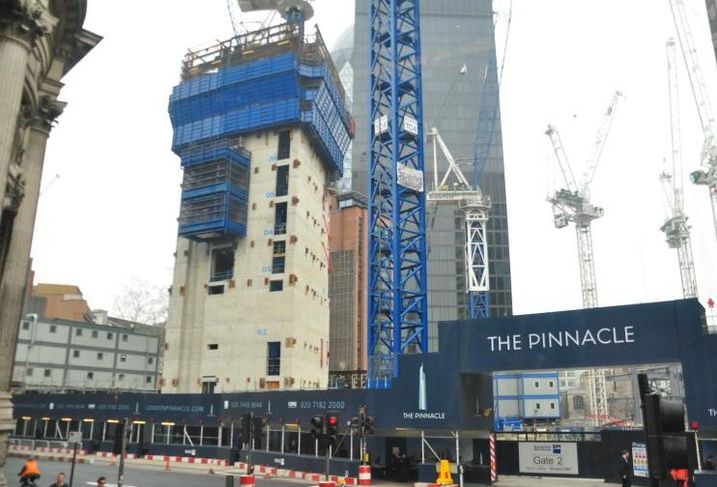 Wikimedia Commons
The Stump in the City of London - what happens when the timing is wrong.

When Landsec was looking for a development partner, a joint venture was formed with the Canary consortium minus Glick to buy a 50% share in the scheme.

It was a bold decision to partner on the scheme. Canary was just a year past its potential debt default, and Morgan Stanley was in the middle of firefighting issues in funds that had made highly leveraged investments at the top of the market. No one would have blamed either for not deciding to back a 671K SF speculative development in London.

But in late 2010 the Walkie Talkie was commenced and was a roaring success. Its position in London’s insurance district appealed to tenants in one of the more robust sectors of financial services.

And since few other new offices were being built but London was recovering, it was able to capture some of the highest rents in the City of London.

It has proved a spectacular investment for both Landsec and the Canary consortium. Leckie estimates that the deal represents a 167% profit on development cost for Landsec.

For the Canary consortium, the numbers look even better. Its all-in cost for acquisition and development of the site was around £775/SF, and the purchase price reflects a value of £1,915/SF. That equates to a profit of around £382M.

The £1.3B sale of the building to the Hong Kong family that invented oyster sauce is the poster child of the current trend of private Asian investors looking to park capital in London real estate, even though the returns look poor. The yield on the deal is 3.4%, which Leckie points out means the building hardly turns a profit once maintenance costs are factored in.

Also significantly, the sale of the Walkie Talkie means Morgan Stanley has ended its 13-year association with Canary Wharf, a company it first tried to take over in 2003. It sold its shares in Canary when it was taken over by Brookfield and Qatar Investment Authority for £2.6B in 2015, and the Walkie Talkie was its last tie to the company.