On a rainy Tuesday afternoon in November a walk around Mayfair with Nigel Hughes gave an intriguing insight into the future of Grosvenor’s famous London estate, and a delightful peek inside its past, which is littered with spy bases, buildings sold to fund new yachts and houses of ill repute converted to corporate HQs.

Hughes has been the estate surveyor for Grosvenor since 1985, and perhaps no one knows Mayfair, and Grosvenor’s other West End estate, Belgravia, better. 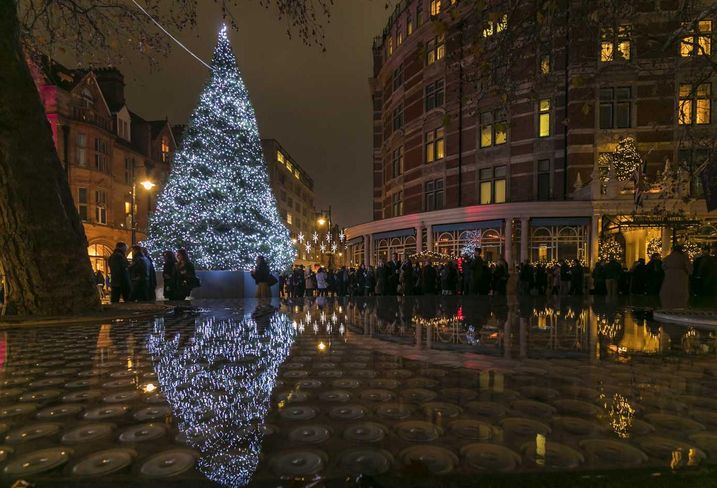 The first estate surveyor was Thomas Barlow, a carpenter, who was responsible for planning and building much of Mayfair in the 1720s on the land the aristocratic Grosvenor family inherited about 40 years earlier.

A series of architects and master planners followed in Barlow’s footsteps, as Mayfair and then Belgravia were built. Post Second World War, the post became one taken on by traditional chartered surveyors (Hughes is a building surveyor) who are responsible for managing the fabric of the buildings, alterations and improvements to existing buildings as well as managing the public realm of the estate.

In that sense Hughes describes himself as a “quasi planning authority,” the first point of contact for leaseholders wanting to alter buildings, as well as for residential tenants in the Peabody affordable housing and the super-luxury houses old and new that have been home to everyone from prime ministers like Margaret Thatcher to those who have brought down governments, like call girl Christine Keeler. 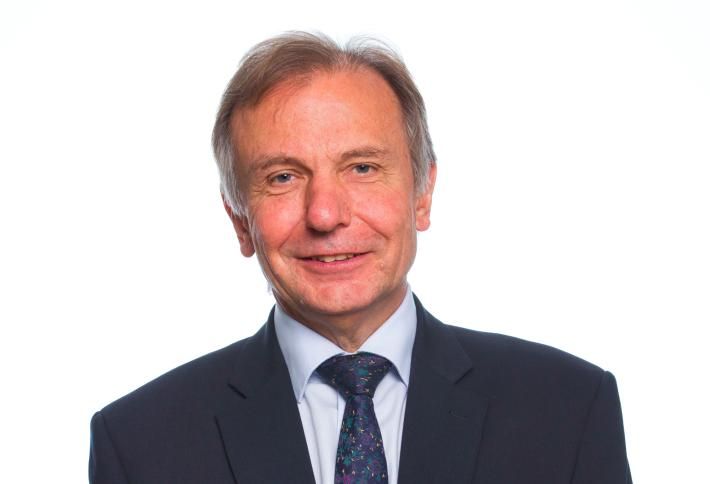 Belgravia is uniform, as a result of it being built later, having more set lease lengths and there having been less appetite from various Dukes of Westminster to change it. But Hughes describes Mayfair as a “hodge podge, which is always evolving and always changing”.

That is true today; the reduction of vehicles on Oxford Street and the opening of Crossrail is expected to significantly increase the number of visitors to the West End and the northern boundary of Grosvenor’s Mayfair estate, and as a result Hughes is looking at new schemes to capitalise on this.

A lot of what Hughes does is not high profile, but he does a lot to improve Mayfair for office occupiers and pedestrians, and hence create the appeal that makes it the purple square on the Monopoly board with one of the highest office rental averages in the world. Grosvenor’s Mayfair and Belgravia assets are worth £3.1B. 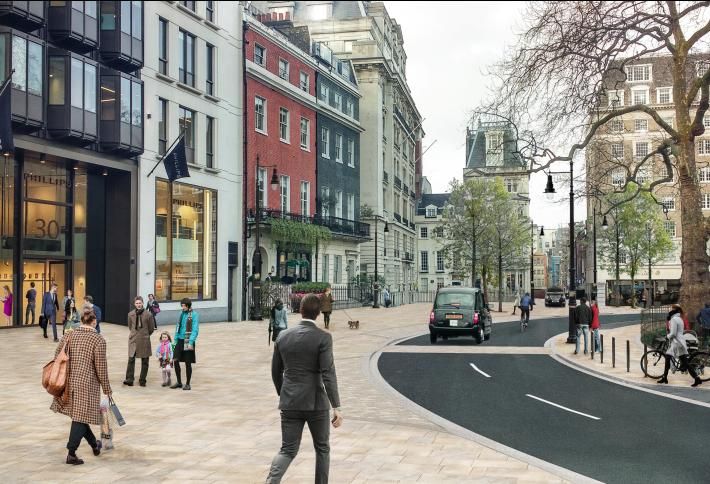 The northern end of Berkeley Square is to see pavements extended and pedestrian crossings improved, which will reduce the terror of crossing a street with no decent crossing and increase the appeal of the square to retailers.

“Working in London today is so much more complex than when I started,” he said. “Partly that is regulation, but also, previously people might have refurbished their buildings every 20 years. Today it is every three or four years.”

North of Berkeley Square on Davies Street, the mixed-use building 15-25 Davies St., designed by PLP, has slogans from the French Revolution carved into the stonework, which needed special dispensation from the late Duke. He was fine with it because, his family having come over from France in the 11th century, none of his relatives lost their heads in the revolution. 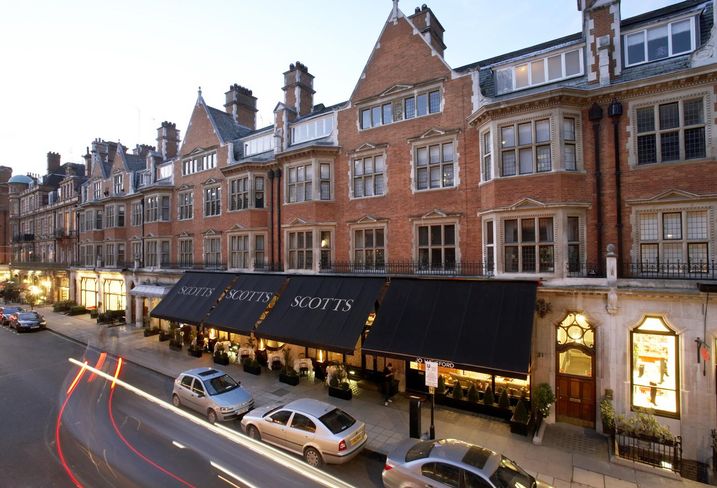 Ever wondered why, while the rest of Mayfair is a mix of architectural styles, Mount Street has a uniform look, with the buildings fronted by terracotta cladding?

“The first Duke [Hugh Grosvenor, duke from 1874-1899] was obsessed with terracotta,” Hughes said. “After the Natural History Museum and the Victoria and Albert Museum were completed, the terracotta factories [some owned by the Grosvenor family] were not very busy and there was a surplus, so it was used to build Mount Street.”

Round the corner from Mount Street we are into Grosvenor Square, where earlier this year Grosvenor invited members of the public to submit ideas for ways to bring more people into what is London’s second-largest square after Lincoln’s Inn Fields. Grosvenor already runs a programme of cultural events in the square, particularly in the summer, moving it away from its past as either the domain of the super rich, or the preserve of branches of the U.S. military during the second half of the 20th century.

Hughes can’t say what public proposals will be taken on board, but one that will not is the idea to build a transparent swimming pool above the existing buildings, running all the way around the square. Shame. 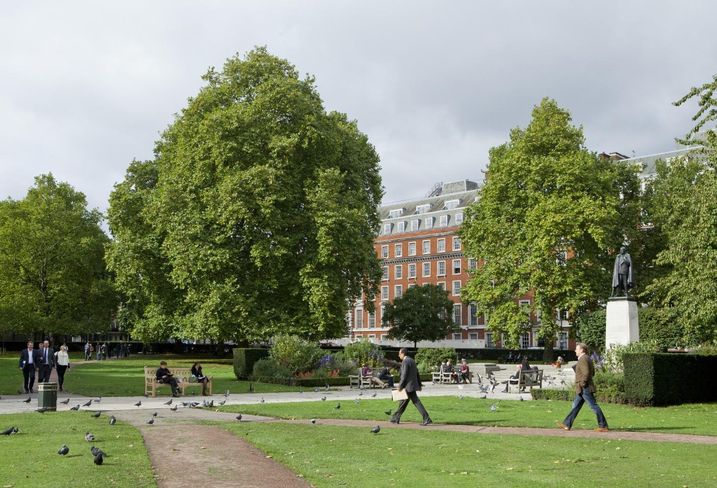 The European HQ of the U.S. Navy and the U.S. Embassy were located in Grosvenor Square until a few years ago. The U.S. Embassy was designed by modernist architect Eero Saarinen in the 1950s, and its white facade was supposed to turn black as a result of London’s famous air pollution, thus rendering its bronze details more striking. But clean air legislation stopped the stone turning colour, and now it is just a dirty grey.

It has been home to politicians for the past 250 years or so, with strong American links. The office now occupied by former prime minister Tony Blair’s private business ventures was first occupied by John Adams, the second U.S. president and the first-ever U.S. ambassador to Britain.

North of Grosvenor Square and just off Oxford Street is another of Grosvenor’s recent major developments, the 73-room, five-star Beaumont Hotel. The history of the Art Deco building reminds you that for a large swathe of the 20th century there was not the same insatiable clamour to live and work in London, and it is amazing that a site next to some of the most prime real estate in the world can have been put to such low value uses.

For a long time it was the car park of nearby Selfridges, then a Ford car depot, then a site for car hire company Avis. 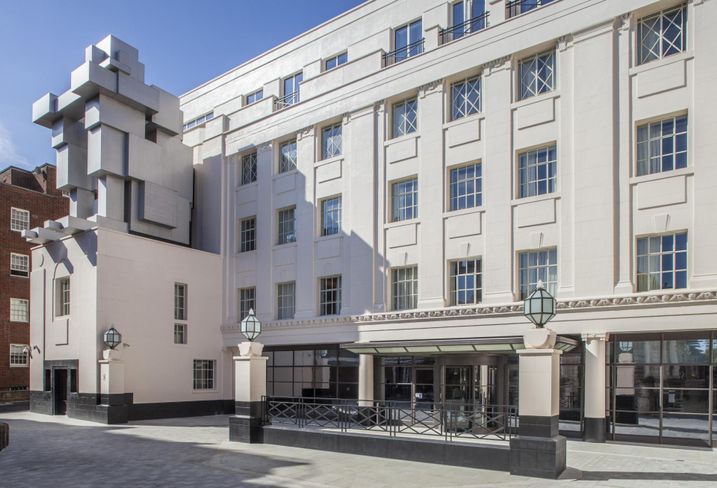 Courtesy of Grosvenor
The Beaumont Hotel

Grosvenor took over the development of the building after the financial crisis halted plans to sell the site, and it opened in 2013 operated by restauranteurs Corbin and King. Now the long leasehold is reported to have been bought by the Barclay brothers for £140M, who will bring in their own operators.

“We could have just built more residential, but we wanted to add more amenity to the north part of the estate,” Hughes said.

The outside of the building has a striking addition to it in the form of an extension designed by sculptor Anthony Gormley. It looks like a builder and thus is affectionately nicknamed Bob, Hughes said. The new owner is now working on an extension which will see the 20K SF 2 Providence Court, which backs onto the hotel site, converted from office use. Again that building has had some interesting tenants over the years, including both the U.S. and U.K. secret services.

Grosvenor is planning to build a food market in an adjoining deconsecrated church.

“It is amazing how poor a lot of the food offering is around Oxford Street considering how many people visit there every day,” he said.

The final part of the journey round the estate takes in one of the most significant new developments Grosvenor is planning in Mayfair, the redevelopment of what is known as the South Molton Triangle, a block just south of Oxford Street bounded by Davies Street, Brook Street and South Molton Street that takes in the listed Grays Antiques market.

Courtesy of Grosvenor
The triangle block in the picture will be redeveloped as Grosvenor's South Molton Triangle scheme.

Grosvenor is in the middle of a consultation that will inform its plans for a significant new mixed-use development.

“Once Crossrail opens then we will see a significant increase of the number of people arriving at Bond Street station and using these roads,” Hughes said. “We will be looking to improve the public realm and also look at the opportunities for improved buildings.”

The site is opposite what was the office of the Grosvenor Group of companies on Davies Street, which expanded as the company evolved from disparate businesses managing different parts of the Grosvenor family assets into the more modern company it has become today. That included taking over what was previously a brothel.

And visible down the road is a corner of Claridges hotel, a building with a history that harks back to a time when the family ran its estate in a less rigorous way.

“The second Duke sold the freehold in the 1920s, and everyone thinks it was to pay off a gambling debt, but that’s wrong: It was to buy a new yacht,” Hughes said drily.

A major chunk of Mayfair has been owned by Grosvenor for nearly 300 years, and the plan is to make sure it stays profitable for the next 300. Selling freeholds to buy yachts is probably off the agenda.