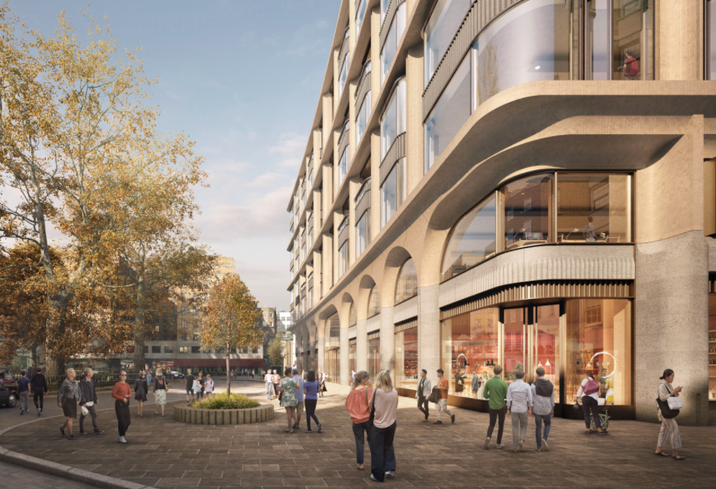 Courtesy of AHMM
The proposed redevelopment of Lansdowne House

It was once the location of a garden around which British prime minister William Pitt the Younger and William Waldorf Astor, the richest man in America, strolled, and occupies one of the most prime pieces of real estate in the world. And now plans have been revealed for a major redevelopment of Lansdowne House on Berkeley Square by the Sultan of Brunei.

The Brunei Investment Authority has lodged plans to redevelop Lansdowne House, which occupies almost all of the southern side of Berkeley Square, and extend it from 181K SF to 225K SF, CoStar News reported.

Bisnow revealed last year that a redevelopment was being planned, after Lansdowne House was exempted from listing by the Department for Culture, Media and Sport.

CoStar revealed that CO-RE is the development manager for the scheme and that the redevelopment could cost as much as £200M. AHMM is the project’s architect.

The new scheme will comprise 10 stories and include 14K SF of retail and restaurants on the ground floor, as well as an extended public realm around the building, a roof terrace, balconies and 480 basement cycle spaces along with showers and changing facilities.

The building is 98% occupied with leases that all expire before 2021. The redevelopment is slated to take place from 2022 to 2026.

The redevelopment could create one of the most valuable buildings in the West End, where office buildings on this scale are rare. Data from Cushman & Wakefield shows capital values in the area for the best space are between £2,500 per SF and £3K per SF, which would value the building at more than £550M.

The Brunei government attracted controversy in 2019 when it proposed new Sharia laws, which include death, potentially by stoning, for those found engaging in same-sex intercourse. The proposed laws led to a boycotting of the hotel assets owned by the BIA, including the Dorchester in London, before an about-turn by the government.

Lansdowne House is on the site which was once the garden of the original mansion house of the same name, which was built in 1763 by John Stuart, 3rd Earl of Bute, a nobleman who would go on to become prime minister.

It was bought a year later by William Petty, 2nd Earl of Shelburne, who also became prime minister. A buy-to-let investor with a good eye for location, he rented the house out to wealthy families, who were attracted by interiors so lavish that when the house was partly demolished in the 1930s they were sent to art museums in New York and Philadelphia.

Famous tenants included William Pitt the Younger, Viscount Astor and department store founder Harry Gordon Selfridge. Part of the original house remains standing and was turned into the Lansdowne Club, across the road from Lansdowne House.