A Texan DJ And Developer Wants To Bring A Big Office Scheme To Brixton. Locals Aren’t So Sure.

The people of Brixton are not massive fans of the new development planned by a developer-cum-DJ and a U.S. private firm, if the opinions shared on the website for the planning department of Lambeth Council is any indication.

Last month UK developer Hondo Enterprises and private equity firm Angelo Gordon submitted plans for a 200K SF office scheme in the centre of Brixton, on a site next to the famous Brixton Markets, as well as an extension of the market itself. Of the 117 people who have submitted a comment to Lambeth Council, 114 are against the scheme, just three in favour.

The office element of the proposed scheme will rise to 19 storeys, and is unlike anything that has been built before in Brixton, an area of London synonymous with London’s black population since large amounts of immigrants from the Caribbean settled there in the 1950s, 1960s and 1970s. And with that size, scale and difference has come opposition and criticism. It is the debate about urban gentrification in microcosm. 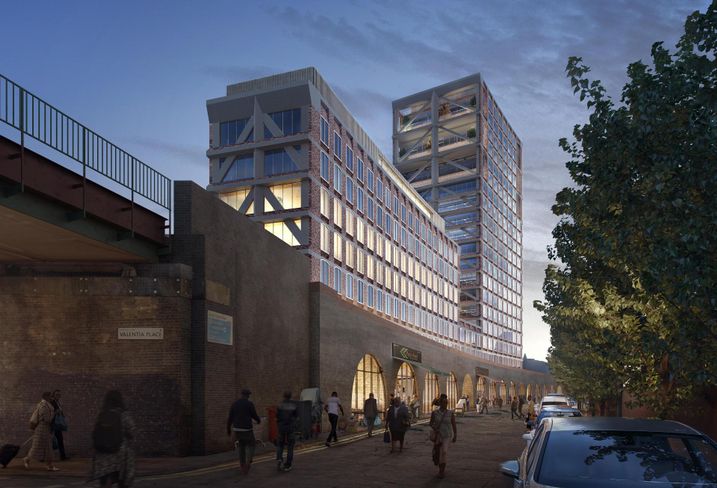 Hondo is run by former Atlas Capital Director Taylor McWilliams, who is also a founder of DJ collective Housekeeping and is a semi-regular feature in the pages of society magazines like Tatler, having dated Prince Harry’s ex Chelsy Davy.

In March 2018, Hondo teamed up with Angelo Gordon to pay London & Associated Properties £37M for Brixton Markets, two separate Grade-II list covered markets called Market Row and Brixton Village that comprise 140 shops and restaurants. It saw off competition from Sports Direct founder Mike Ashley to secure the deal. It also bought an adjacent site on Pope’s Road, which included a Sports Direct store, and intends to build the new office tower there. Under the application submitted, the 60K SF markets will be extended by 25K SF, with the addition of a rooftop restaurant and central events space.

Like most of inner London, Brixton has been gentrifying over the past three decades, leading to tension between the longstanding population and newer residents. Brixton Markets has been a focal point for these tensions: Once almost entirely the preserve of independent grocers and retailers serving the existing community, slowly, organically, it became a London hipster foodie destination.

Pizza chain Franco Manca had its first outpost there, and Brixton Markets is now predominantly populated by other independent restaurants, cafés and bars, which some locals have said only cater for a new, wealthier, middle-class clientele. When a new outpost of Covent Garden eatery Champaign + Fromage opened in 2013 it was met by protests.

So even before Hondo and Angelo Gordon’s acquisition, Brixton Markets was the subject of accusations that it was fuelling gentrification of the area, and tenants that served the pre-existing community were being driven out.

Its purchase by a developer with links to high society backed by a New York private equity firm has only amplified complaints. The emergence of the markets as a draw for urbanites with plenty of disposable income to spend on food is what made the scheme a draw for the new owners, but it is also what makes its development such a sensitive issue.

The main issue cited on Lambeth’s website in opposition to the scheme is its height.

“The proposed 20 storey development is too high,” one local councillor wrote. “It would dwarf the nearest tall building, International House, which is 13 storeys high. Furthermore, it will dominate and overshadow the nearby conservation area.” 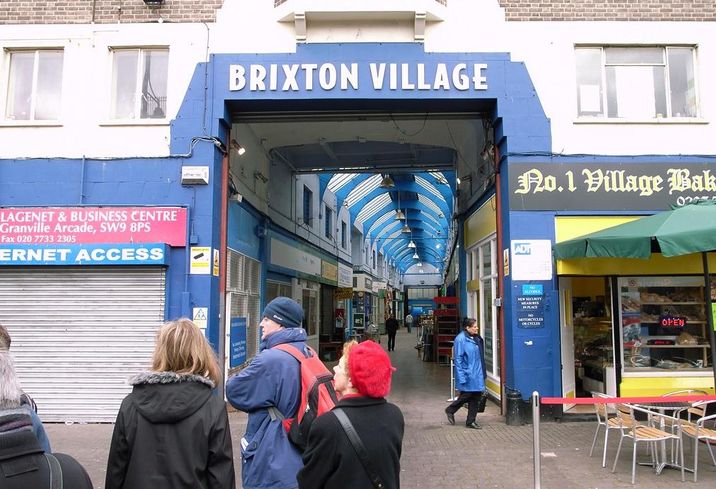 Flickr
The entrance to one of the two Brixton markets.

Last month, protestors crashed a Zoom DJ set point on Housekeeping to complain about their perceptions of the negative impact the scheme would have on Brixton.

In its planning submission, Hondo acknowledged the response to its pre-application with the local community had not been wholly positive, and that a big part of this related to the building’s height.

“Based on the feedback received, the public response to the proposals are mixed,” it said. “A number of people surveyed were opposed to the scale of the building and a number of respondents expressed negative views on the design of the building. There was also a substantial amount of comments regarding the perceived gentrification of Brixton.”

Hondo said in the submission that people support the need for more office space in Brixton, as well as its planned inclusion of a central space within the markets that could be used for public events, including events held by community groups.

On the gentrification claim, commentators complaining of existing tenants being pushed out of the scheme pointed to one retailer, a cash and carry called Nour, which has vacated its longtime home.

It is worth pointing out that typically those who object to a scheme are more likely to come out loudly and publicly than those who support it. One of the comments in support sums this up.

“I know people will moan, they always do in Brixton sadly, but I think this is a good scheme,” a supporter wrote. “Brixton needs more office space and as long as this building is finished to a high spec then it will be a good addition.”

Bisnow contacted Hondo seeking comment on the main points of opposition to the scheme, namely height and gentrification. The statement did not directly address these issues, but a spokesman for the scheme did point to several elements of the planning application. 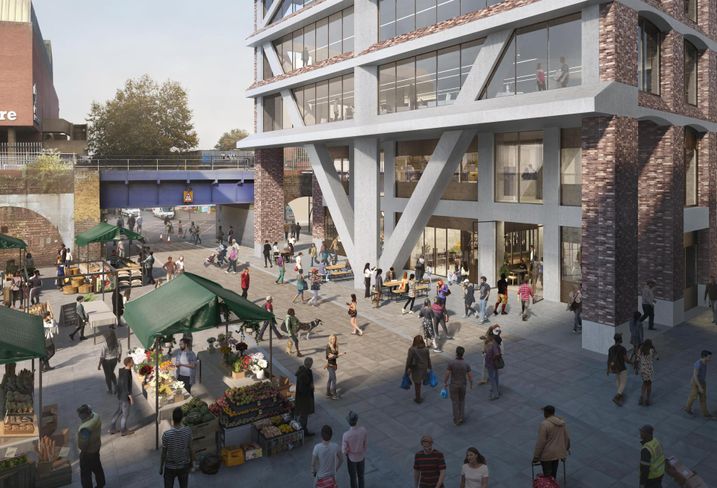 The new office will include 20K SF of affordable workspace, that will cost 50% of prevailing market rents. The workspace will be run by community action group Impact Brixton.

The spokesman said that in order to provide this affordable workspace, the scheme needs to be of a certain size to create critical mass. He also pointed to the lack of office provision in Brixton. Hondo estimates the scheme will house 2,000 workers, who could spend up to £3.5M in the local area. The height of the building has been reduced by 11 metres from original plans.

On the question of pushing out existing tenants, the spokesman said Nour had not been evicted — rather, UK Power Networks said an electricity substation had to be put in its unit. He said Hondo is hoping to announce news of a new home for the retailer in Brixton Markets soon.

Hondo’s submission adds that in its extension of the market it will be creating more small units of the sort used by traditional Brixton Markets retailers.

Hondo and Angelo Gordon are not the only big property investors buying into Brixton — in February, Derwent London paid £38M for the 54K SF, 11-storey Blue Star House on Stockwell Road, a short walk from Brixton Markets. The area is becoming a draw for investors looking for value and trying to tap in to Brixton’s growing appeal and the magnetic draw of artisan food and drink.

But Hondo and Angelo Gordon are building something big and new, next to a scheme that was already a locus for the eternal debate about urban gentrification. The path for this scheme was never likely to run smoothly.