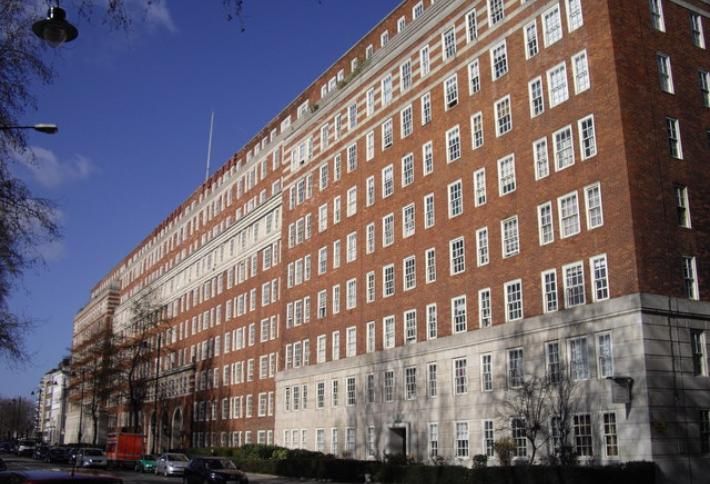 French investment giant AXA Investment Managers - Real Assets is in advanced talks to buy the famous 1M SF Dolphin Square apartment block for around £850M, in what would be by far the largest ever deal for a single UK rented residential asset.

AXA is in exclusive discussions to buy the 1930s building, which comprises 1,233 apartments, according to React News. Other investors are still sniffing around the deal, and owner Westbrook Partners might refinance rather than sell the building, React said.

Bisnow is hosting a webinar on the build-to-rent sector on 30 June. Sign up for it here.

The deal would be a watershed for the UK rented residential sector, highlighting how institutions are willing to pay big money for large standing assets.

It would also bring to an end one of the most picaresque real estate stories of recent years.

Dolphin Square is a well-known red-brick landmark on the north bank of the Thames close to the Houses of Parliament. Its proximity to Westminster has drawn politicians including former prime minister Hared Wilson to rent apartments there, as did Christine Keeler and Mandy Rice-Davies, the women at the centre of the Profumo affair that helped bring down the Conservative government of the early 1960s.

But it had longer-term plans. It used a legal process called enfranchisement to get to a position where it could forcibly buy the freehold from insurance company Friends Life in 2015 for £176M. This took more than five years of legal wrangling, with Friends Life trying to block the process.

As well as about 850 apartments let on standard assured short-hold tenancies, there are 165 serviced apartments, and 215 tenants who have fixed rental payments of 50% of market level on leases that run until 2034.

These tenants are a loud and vocal minority, and almost all protested against a major redevelopment proposed by Westbrook in 2017 that would have seen it invest £400M in the asset. This would create 275 new apartments, taking the total to 1,395, principally through the addition of another storey on top of the existing structure and also by splitting larger flats down into smaller units.

More serviced apartments and new gym facilities and cafés would also have been added. Westminster Councillors turned the application down even though planning officers recommended it for approval. Westbrook has launched an appeal against the decision.

AXA has been a major investor in rented residential assets in Ireland, Spain and Germany, but this would be its first significant real in the sector in the UK.