77 Degrees, a new rooftop bar in Midtown Houston, is an Instagrammer's dream. A dynamic view of Downtown, the El Loco — a pineapple bowl stuffed with seasonal fresh fruits, assorted gummy candies and Flaming Hot Cheetos drizzled with chamoy and Tajin —  and a pair of bar swings are drawing the eyes, and more importantly, the lenses, of visitors.

Spaces where customers want to take photos and share on social media are part of the allure of the Austin-born bar concept, owner Darren Van Delden said. How customers engage with the four-level, tropical-inspired bar was an essential part of the build-out of the facility and its overall brand. 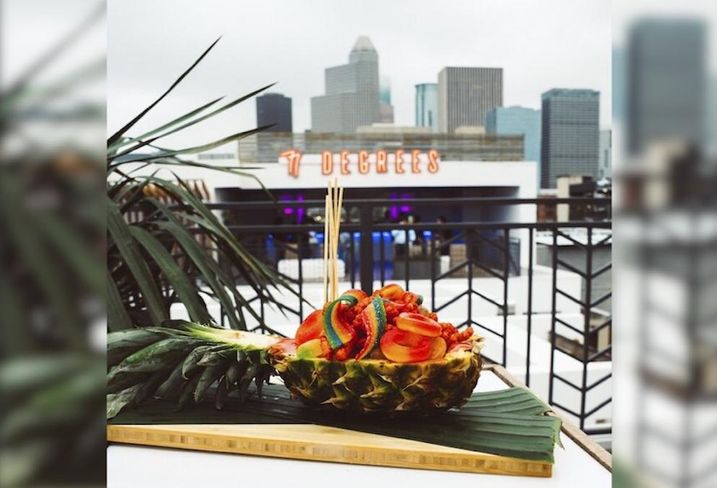 Since opening in Houston in March, 77 Degrees has become increasingly popular on social media, he said. Customers have shared more than 500 photos using the bar's Instagram geolocation marker while the official page has shared about 30 posts. The bar's posts receive hundreds of likes; its Instagram account has more than 5,000 followers. A recent post of bright cocktails and the Houston skyline got over 600 likes.

Social media is an introduction to 77 Degrees for many customers, Van Delden said. The attention brings customers to the door, though he said the quality service and food are what bring people coming back.

Something that is "Instagrammable" spurs people to take a photo and share it on Instagram, Gin Design Group founder and creative director Gin Braverman said. Her firm has designed over 40 bars and restaurants, including Herb & Beet, Axelrad, Goodnight Charlie and Eunice, all in Houston.

It is a new term over the last couple of years, but one that is popping up increasingly often. Something can be Instagrammable because it is incredibly beautiful, funky or otherwise unique. A neon sign or eye-catching signage may be one of the easiest ways for a business to incorporate an Instagrammable prop, Braverman said.

Other examples, which can vary in price depending on the level of customization, include murals, vignette or textured walls, light installations, projection art and custom furniture. The overall architecture of a building may also prompt an Instagrammer to whip out a phone and take a pic. Local Houston examples include the "Heights" letters outside of the new H-E-B on Shepherd Drive and the Texas-shaped lazy river at the Marriott Marquis in Downtown Houston.

Owners are investing in Instagrammable moments because it is a marketing opportunity, Nemaworkshop Senior Director Martin Weiner said. His firm focuses mostly on hospitality design and is a member of LUCID, a platform where architects focus on experiential design. There is a mutual desire for customers to remember and share their experience while also providing a big "like" or the stamp of approval for venues they loved.

Incorporating Instragrammable elements can take trial and error, Van Delden said. He went through six sets of bar swings at the Austin location before contracting a furniture marker to make custom pieces. He also commissioned local artists to design light fixtures and decor.

Van Delden and his brother Dan Van Delden launched Union Venture Group, which has over 20 restaurants and bars in Houston and Austin and is expanding into Dallas-Fort Worth. 77 Degrees is atop Jack & Ginger's, a traditional Irish pub, at all of its locations — including the one opening soon in Dallas.

The trend to build Instagrammable moments into a commercial design is not expected to slow down, Braverman said. Most of her work includes creating moments where people want to stop and admire, which is a natural reaction that pulls customers in through storytelling or a compelling design. In today's world, people are more likely to share that moment on social media.

"Of course, [owners] want the free publicity," she said. 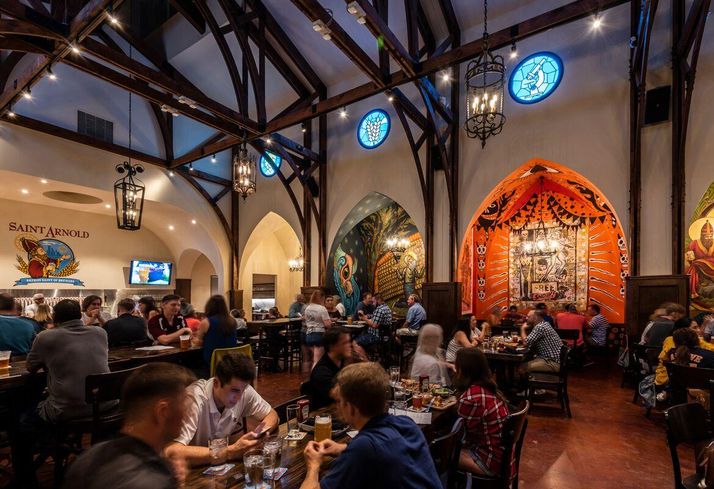 A Church Of Beer And Photos

Instagrammable moments are a major attraction for locals and tourists to visit the St. Arnold Brewing Co. beer garden and restaurant in Houston, according to Social Media Manager Priscilla Walker. Since opening in July, the company's official account has noted a 259% increase in the number of Instagram followers. St. Arnold Brewing Co. has more than 61,000 followers.

Dubbed the beer church, St. Arnold's space just north of Downtown Houston offers several popular places for photos such as the backdrop of the Houston skyline, the silos, the murals painted by local artists and the Art Car Gallery. The beer is also heavily shared — the beer flights, the pink-colored beer and its to-go beer packaging all get snapped often.

“We have always been supportive of local artists and the street art community," Walker said. "We have used them to create murals in our buildings for years. Those spots became Instagrammable.”

The emphasis on social media came naturally as it complements the desired experience outcome, Walker said. St. Arnold seeks to provide a unique experience with each visit and in return, people share with others.

"They want to show that off to their network. We like to create that experience," she said.

The social activity drives new customers into the brewery every day, Walker said. However, social success is based not only on likes and comments under a post but on total engagement, which measures the reach of a post by the number of people who saved it or sent it to another person. A company can track its social analytics by signing up for an Instagram business account.

Walker keeps an eye on the number of followers but doesn’t set specific goals for the number of likes or comments. She has found posts with bright colors, dogs (St. Arnold’s is dog-friendly) and an announcement of a new beer are shared the most.

"Since we built the beer garden our engagement on all networks, especially on Instagram, has gone up," she said. "People like posting themselves being here with their family and friends." 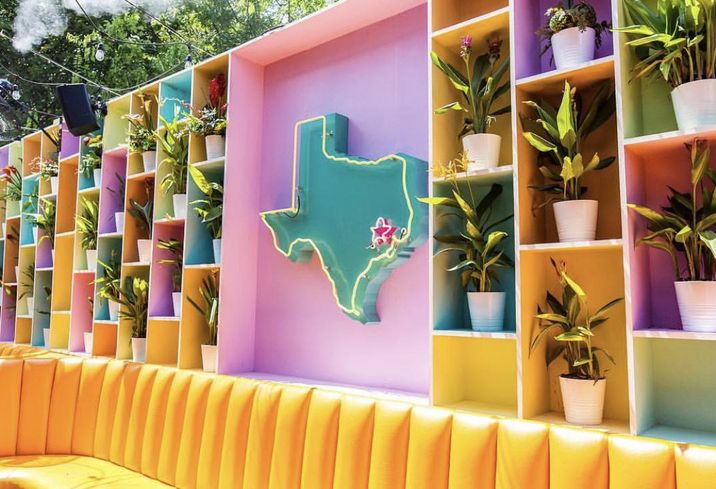 The design attention on capturing Instagrammable moments depends on the story or concept a business wants to share, Glen & Co. owner Glen Coben said. His firm has designed over 100 restaurants internationally in cities such as New York, Boston, London and Bangkok, and he is also a LUCID consultant. Instragrammable moments can happen organically or intentionally, but the goal is always to be authentic to the brand.

Creating one true Instagrammable moment was key when Coben designed Nusr-Et, a chain of steakhouses by Turkish chef Nusret Gökçe, known in the social world as Salt Bae. Gökçe became an internet sensation for his technique for preparing and seasoning meat.

The Miami location features an 8-foot portrait of Salt Bae positioned in his viral pose, dropping salt from his fingertips to his forearm and then falling onto the dish. The portrait was designed with pictures in mind with no chairs or tables in front of it, he said.

On the flip side, Coben designed an Alsatian American-inspired dining concept for chef Gabriel Kreuther in New York. He said the design strived to tell the chef's story and the history of the cuisine and region. While it doesn't have a specific Instagrammable moment, the French-inspired restaurant offers custom wallpaper and a glass backlit entrance sign that were purposely considered for photos.

While more owners are requesting Instragrammable spaces within the design, many design experts said it's a philosophy they always followed.

"Even before Instagram, we designed Instragrammable moments," Coben said.

For many decades, bathroom design has been the go-to places to capture the attention of guests, Coben said. However, the overall dining experience is becoming more about an escape and designers are embracing this ability to incorporate design elements throughout.

"We don't design for Instagram, but Instagram is the byproduct of creating a good experience," Weiner said.