Yet Another Iconic Downtown Tower Is Getting A New Look 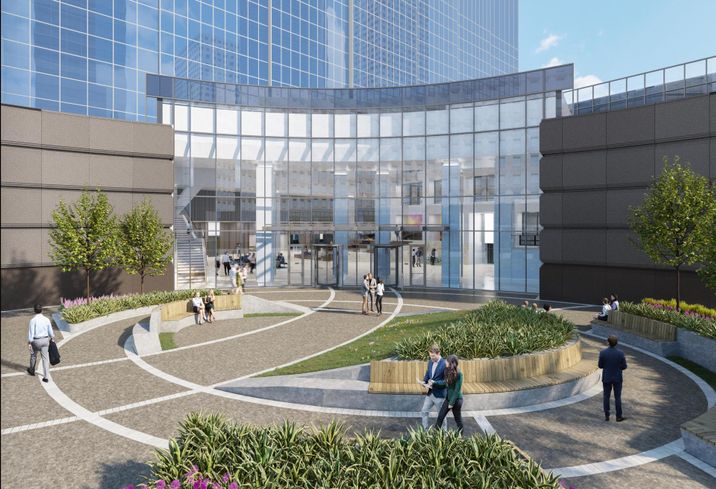 Brookfield Properties is at it again. Though it is still handling renovations at Houston Center, Allen Center and Total Plaza, it is now gearing up renovations at Heritage Plaza.

At 53 stories, the Class-A tower at 1111 Bagby St. in Downtown is Houston's fifth-tallest building. Brookfield Properties plans to completely redo its entrance with a new exterior glass curtain wall facing Dallas and Brazos streets. The updated lobby would include a live plant wall and a “social stair” with seating to encourage tenants and visitors to congregate and socialize there. The sky lobby with exterior patio on the 13th floor would be revamped, including adding new conference space and seating. The ground-floor conference center would be upgraded, as would the elevator lobbies.

The submarket has struggled since the price of oil dropped in 2014. Downtown office landlords saw their profits halved from 2015 to 2018, according to Savills Studley. Office vacancy in the submarket rose to nearly 23% in Q4 2018, according to CBRE data. Though some were optimistic 2019 would mark a recovery in Houston's overall office market, that hasn't really materialized.

“The recovery has been a lot slower than we thought it would have been,” Avison Young principal Charlie Neuhaus told Bisnow in August. “At the beginning of the year, we were optimistic that we would have positive absorption for the year, but I don't think we are going to have that this year.”

Landlords have used the slow period to update their buildings to be more competitive.

Construction on Heritage Plaza, which has 1.1M SF of office and 29K SF of retail space, will begin in October and is expected to be complete in January 2021. Kirksey is designing the renovations, and O'Donnell/Snider Construction is the general contractor.

Brookfield Properties' renovations at Total Plaza should be complete early next year, and the projects at Houston Center and Allen Center are expected to wrap up in late 2020.