As part of its initial planning effort, Texas Central Railroad identified and evaluated four HSR corridor alternatives and then narrowed down to two options: One that primarily followed the BNSF rail line and one using existing, high-voltage transmission line easements along the utility corridor.

The FRA's analysis determined the utility corridor route is the preferred location, so TCRR developed 21 potential alternatives within that route that could be tied together to create end-to-end alternatives.

The selection of the utility corridor as the preferred route also narrowed the TCRR proposed station locations to the Downtown Dallas/Interstate 30 area, Grimes County (near Roan’s Prairie) and the US 290/Interstate 610/Interstate 10 area of northwest Houston.

TCRR began with seven station options in the Houston area. The intersection of SH 249 and Beltway 8 in Northwest Houston was considered due to its proximity to George Bush Intercontinental Airport. A station at US 290 and Beltway 8 was also considered. A station between TC Jester Boulevard and Oak Forest Drive was considered but ultimately dismissed because of its primarily residential-focused development. TCRR considered the former Union Pacific Hardy Yards North of I-10 in Downtown, but the area is slotted for a future mixed-use development. Near Downtown, TCRR also considered the area bound by I-10 to the north, I-45 to the west and US 59 to the east. Lastly, TCRR looked at the intersection of 290 and 610.

With a preferred route selected and possible connections to Downtown Houston eliminated, Houston's terminal options narrowed to just two options: US 290/Beltway 8 and US 290/I-610.

Both locations provide equal access to area highways and contain developable areas of land that could accommodate a station building and the HSR right-of-way. However, only the 290/610 location provides potential connections to expanded transit services with its proximity to the Northwest Transit Center.

The three different sites in Houston would not impact protected species habitat due to their developed urban environments, and TCRR determined there would be no noise impacts from station activities.

Each terminal station could accommodate six tracks and three island platforms that would measure 30 feet wide and 705 feet long. Station amenities would include passenger drop-off areas, parking, rental car facilities, ticketing and support services and an indoor station area for passengers to wait.

The high-speed rail team is promoting stations as beneficial at all terminal station areas, saying new development would replace older commercial and industrial or vacant areas, which would improve the aesthetics and visual landscape.

The first proposed location would use an industrial site south of Hempstead Road, west of Post Oak Road and north of Westview Drive.

Floodplain: 0.1 acre within the 500-year floodplain

The draft's initial concerns about this option's high-risk sites indicate it is not a front-runner.

A second proposed station location would repurpose the Northwest Mall. The station would be west of 610, north of Hempstead Road and south of West 18th Street.

Floodplain: Not in a floodplain.

The third proposed location would be north of Old Katy Road, east of Post Oak Road and west of I-610. This location offers a direct connection to the Houston Metro Northwest Transit Facility opposite the station.

Floodplain: Not in a floodplain

The study's visual impact portion offers a glimpse at what each station could look like. Click through the slideshow below to see how TCRR thinks it could reshape its proposed sites. 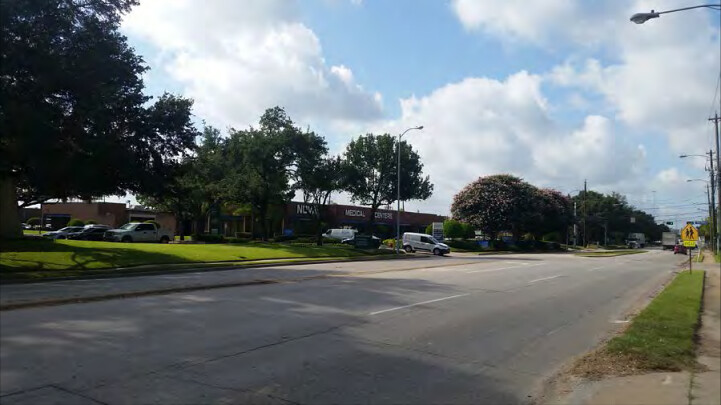 FRA has not made a final decision about which Houston terminal location it prefers. It will continue to analyze all the options through the final environmental impact study.

FRA will circulate the draft environmental impact study for a 60-day comment period beginning Dec. 22, and then will prepare a final EIS that will include responses to comments.

Texas Central CEO Carlos Aguilar said the design/build teams, Fluor Enterprises Inc. and The Lane Construction Corp., have domestic and international rail experience and will use the draft findings to incorporate more details into planning, cost and scheduling.