In-House Data Centers Quickly Becoming Thing of the Past

Houston’s actually a larger data center market than people think; it’s just primarily our major companies housing their own servers. But there’s a strong trend towards co-location, both in Houston and across the country, that’ll drive further demand for data centers. 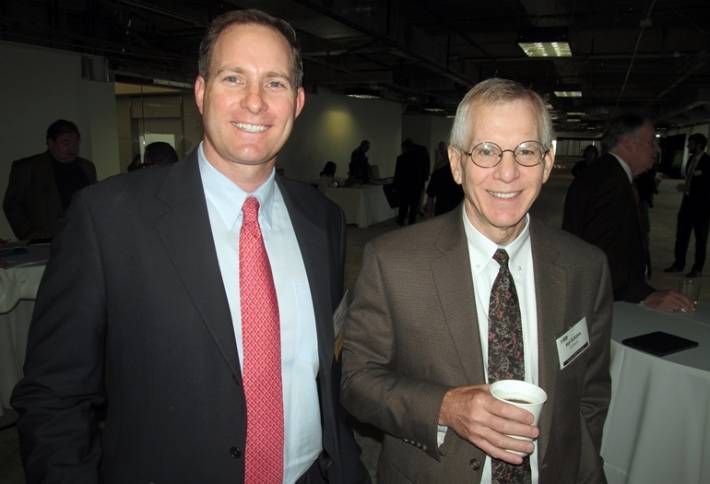 Right now, 40% of nationwide IT load is in co-location space or the cloud, but that’s changing. Digital Realty director Patrick Sullivan (snapped at yesterday’s Bisnow Houston Data Center event, left, with Carlson’s Hal Adams) says a cloud provider CEO told him that in the next three to five years, no companies will think it’s a smart economic idea to own their own data centers. That’ll be a massive shift in the direction of developers like Digital Realty, and he thinks eventually basically 100% of data centers will be handled third party. 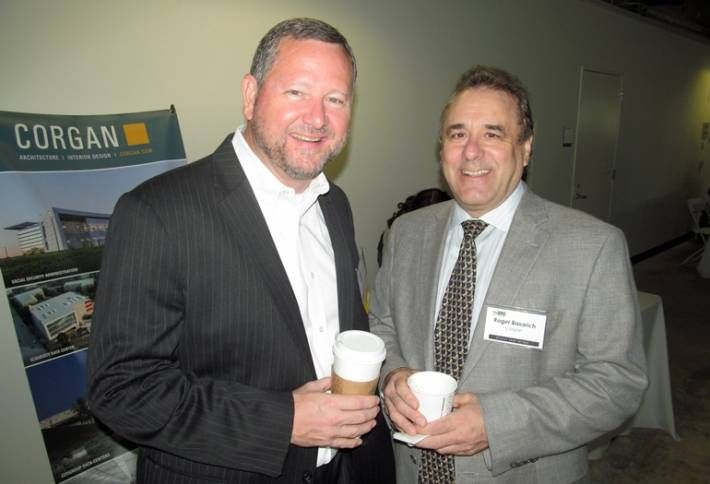 The downward pressure on oil prices is also pushing more energy companies out to third-party providers of data center space, Corgan associate principal Mike Connell added. It’s preferable in uncertain times to have a set amount you’re paying each month rather than the unknown of owning yourself and having CapEx on your books. We snapped Mike with colleague Roger Basarich. 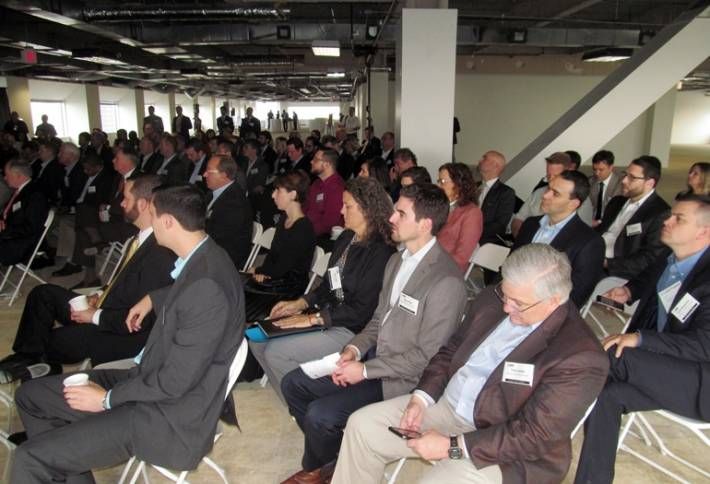 Alpheus Communications CEO Scott Widham says the edge is going to be a huge driver of data centers—as video streaming in particular takes off, companies are choosing to cache popular content on servers closer to users. (It’s thanks to the edge that you can watch Netflix on your phone.) EdgeConneX alone is moving from 16 to 64 locations in the next year to keep up with the video demand, and that includes quadrupling its caching facilities in Houston. Those facilities operate very differently from standard data centers or high-performance computing centers. Looks like some of our attendees were helpfully creating data center demand on-site. 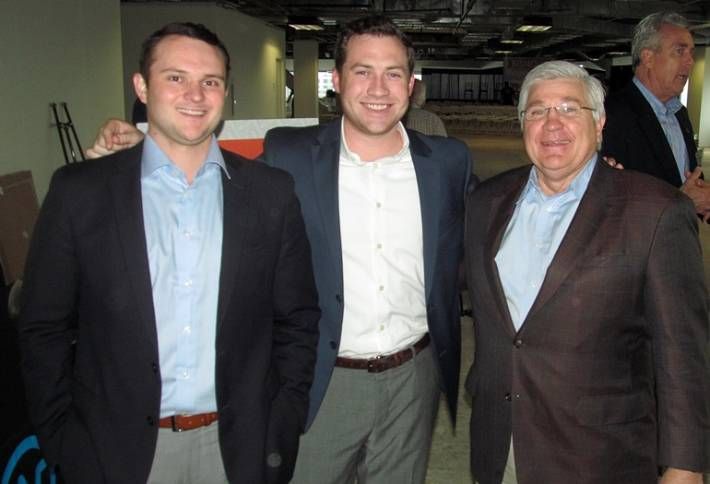 Although Houston’s laboring under a stigma that it’s an unsafe data center market because of hurricanes, that’s just not the case, according to our panel. Patrick says he hasn’t had a single weather event in Houston in the eight years Digital Realty’s operated here. Skybox Datacenters managing partner Rob Morris (center, with Skybox’s Gordon Kellerman and Tom Leiser) agrees that people worry about Houston rather than Dallas, but you can see hurricanes coming and prepare for them, unlike Dallas’ occasional tornadoes. His firm entered Houston recently because they knew their design could mitigate hurricane risk, and they wanted to be around all our Fortune 500 companies. It chose West Houston because of the combo of oil and gas and healthcare activity along I-10. 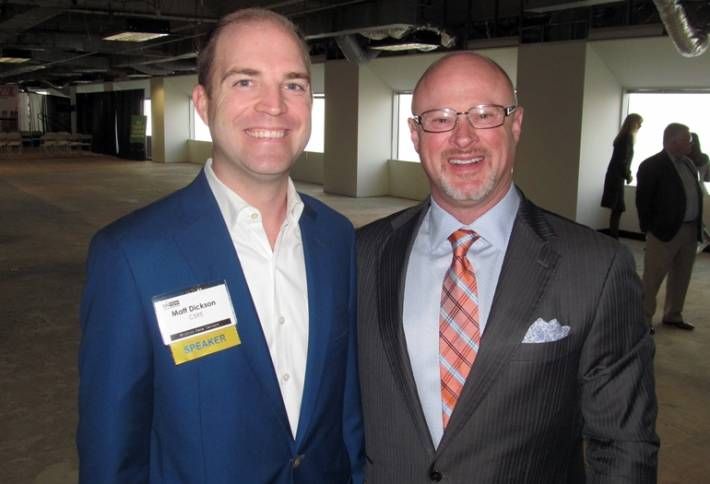 The good thing is Houston has prepared for and buildings are designed for hurricanes if they do come; Hurricane Sandy showed that disasters can happen anywhere and if you’re not expecting them, it’s disastrous. Connectivity is a bigger problem in Houston, according to Stream Data Centers SVP Erik Stockglausner. We need more carriers here. Erik was looking chipper yesterday morning, right, with our moderator, CBRE first VP Matt Dickson. 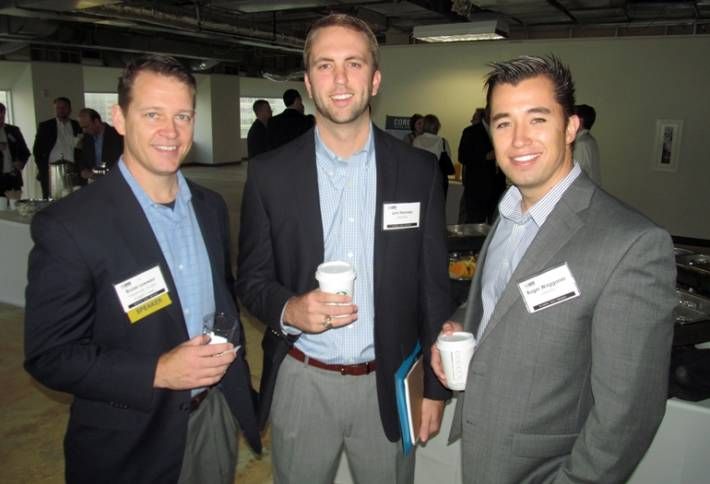 NGKF executive managing director Bryan Loewen says data centers are coming into their own as an asset class. It’s been challenging to get financing, but now more banks, institutional lenders and even CMBS are starting to play in the space. Brian’s far left here with Deloitte’s Levi Hermes and Roger Waggoner. 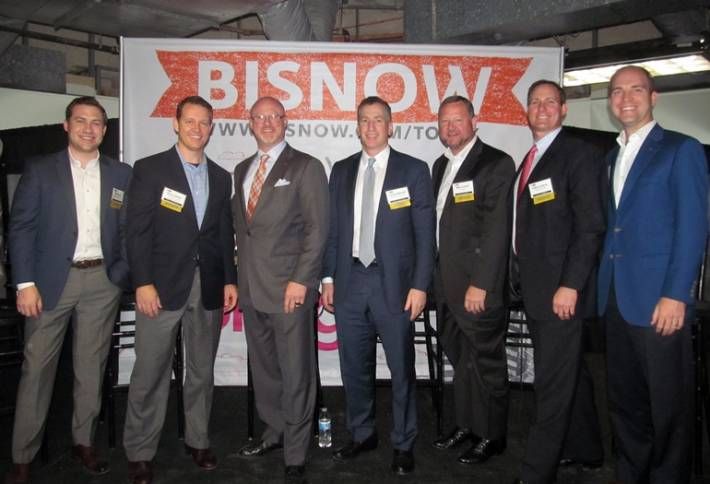 Here’s our all-star panel minus Scott: Rob, Bryan, Erik, Netrality Properties CEO Jerry Marshall, Mike, Patrick and Matt. Jerry says financing is still difficult, though, and he sees it as a big opportunity in the market. He says many lenders cap out at 50% LTV for data centers and want to give long-term, fixed-rate loans. But that’s not a feasible structure because of how capital intensive data centers are because the tech inside becomes outdated and needs to be replaced. (As Matt put it, you’re trying to stay relevant in a 30-year real estate asset while tech changes every 24 to 36 months.) 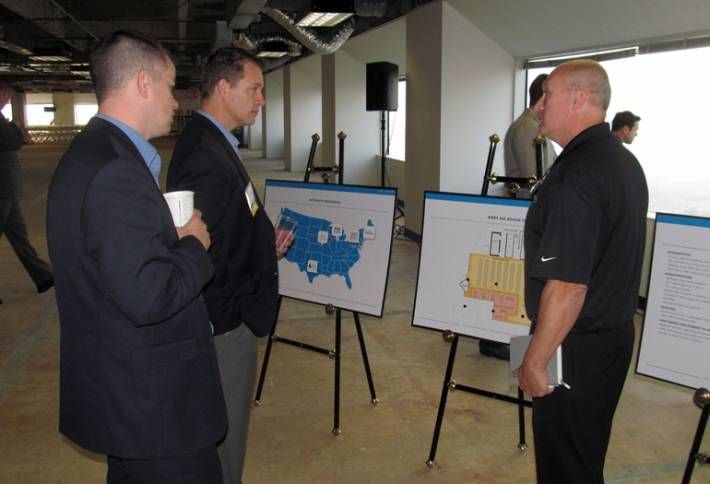 If you’re a lender who’ll offer higher LTV and no prepayment penalties, he says data centers are even better investments than office if for no other reason than the tenant retention—1301 Fannin is in the high 90s. (Data center clients basically only leave if they go out of business, he says.) Plus, you can’t beat the demand; data storage is doubling every year. Netrality graciously hosted us at 1301 Fannin and offered a tour for attendees. Pictured is Netrality’s Chip Robertson showing off planned capital improvements to the building.