Life Time Work has opened its first coworking location in Houston and its third in the country. Adjacent to Life Time Athletic, the City Centre Five office is at 825 Town & Country Lane.

A host of companies ranging from consulting, financial services, creative advertising, technology, video and fashion have already started moving in. The space is more than 60% leased, according to Life Time Work.

"Houston is a dynamic place and it is diversifying from just a story about energy," Life Time Work President James O'Reilly said. "We are seeing a mix of industries coming to our workspace. It is because we are focused on creating this experimental workspace."

Designed to promote a healthy and productive work life, the 25K SF space has 79 open desks, 48 private offices that range from two to four desks, a lounge, eight phone booths, five conference rooms and two phone rooms. Tenants will also have access to monthly events and curated content, a technician, and printing, scanning and copying services.

"Most of the coworking providers in the space cater to early stage technology companies and the culture that evolves around that tends to be a little fratty," O'Reilly said. "We wanted to do something more elevated and more established for professionals."

Life Time Work plans to open additional offices in Greenway Plaza later this year, GreenStreet in Downtown Houston in 2020 and The Woodlands in the near future, O'Reilly said.

"Houston as a city is attracting a lot of inbound migration," he said. "It has made itself competitively priced with the cost of living, and the diversification of the industry is attracting people here to work."

Life Time Work grew from the Starbucks effect: the idea of professionals creating makeshift office spaces at coffee shops, hotels and other spaces, O'Reilly said. The company noticed an increasing number of people working from the club's lobbies and knew there was a better way to serve those members.

Life Time has noticed the evolution of the workplace; for example, the ability of people to work on the road as effectively as they can in corporate headquarters. But the workspace remains a competitive advantage to recruit and retain top talent, O'Reilly said.

"You want the space to represent who are you: your ambitions and your outlook," O'Reilly said.

The result was Life Time Work.

Life Time Work remains true to the company's overall mission to promote health and fitness. Many design elements, such as the layout of the floor plan, the office accessories, services and features, all encourage users to live a healthier life, O'Reilly said.

"We are encouraging people to move around by having a dynamic mix of spaces," he said. "You are not stuck in one place. You can stand or sit, in soft or hard seating, in more public space or in more private spaces, in acoustically diverse spaces. You have the whole spectrum of environments."

The company also considered color psychology and other design measures that can improve productivity. Green is used throughout the space because it represents calmness and improves focus, and plants can enhance a person's mood.

"We thought about how to create a space that allows you to focus on what is important and we handle the rest," O'Reilly said. 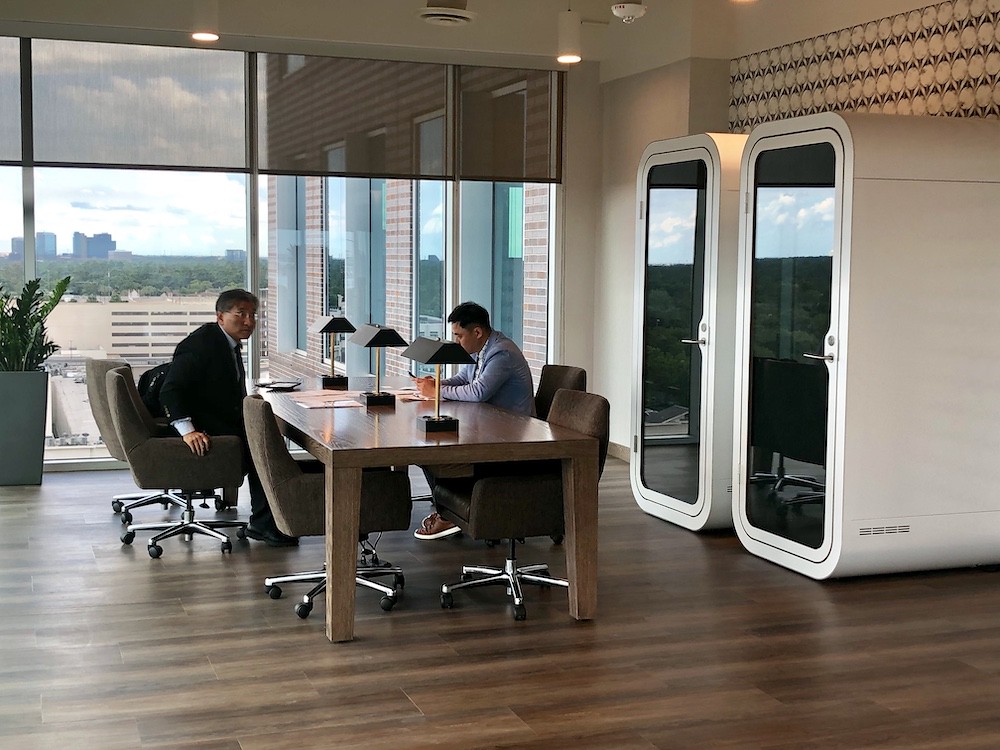