Looking for a staycation? Got visitors coming to town fleeing the cold up north? Here are Houston's coolest and quirkiest hotels worth a visit. 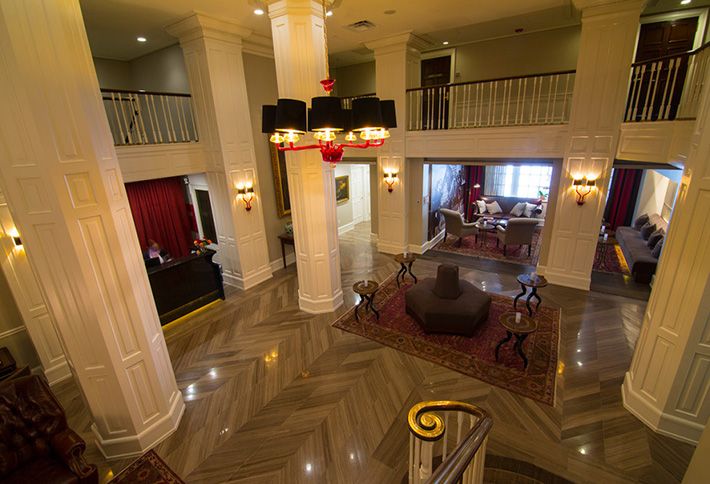 The Lancaster was built in 1926 and descendants of the original developer still own and operate the hotel. It was one of the many buildings designed by Joseph Finger, who also designed Houston's City Hall.  In 1927 and 1928, Clark Gable was a guest when he was performing at the Palace Theatre. The hotel management once held his trunk as ransom because he couldn’t pay his bill.

During WW2, the basement in the hotel was turned into an entertainment venue. Gene Autry was a frequent performer.

Recent news: The Lancaster is expanding its parking, to the detriment of two adjacent century-old buildings, which are being torn down. 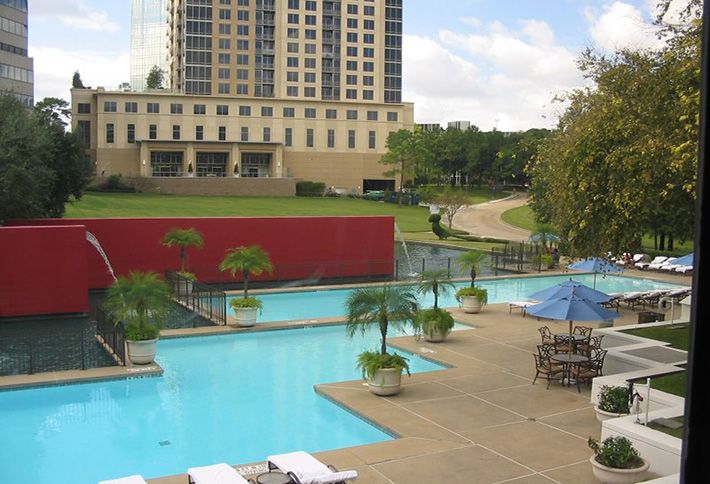 The Omni at 4 Riverway is the definition of corporate luxury, with a calm, minimalist vibe that you get from the moment you enter the hushed marble-and-mahogany lobby. The attentiveness of the hotel staff and the sumptuousness of the rooms are the only things that keep this hotel from tipping over from staid to boring. Which is the perfect cover!

You would never expect this respectable establishment to be one of the craziest rock and roll hotels in town but it is. Stars like Michael Jackson, Madonna, Bruce Springsteen, Jay-Z and Beyoncé have all rested their heads here. The staff’s discretion is unparalleled and with most of the guests sound asleep by 10:30, celebs can get some much needed Zzzs. 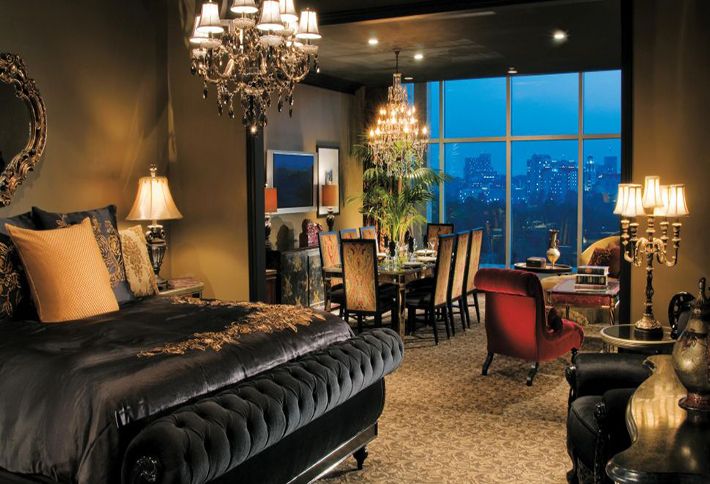 If ordinary is your thing, you might want to pass on Hotel ZaZa. The former Warwick Hotel has embraced whimsy like no other hotel in Houston. It believes that purple velvet should be mixed with faux leopard print. It believes in gold footed beds and enormous crystal chandeliers and a long, koi-filled pool in the lobby. ZaZa is a wonderful, exotic bird of a hotel--sumptuous, luxurious, and rock-and-roll irreverent all at once. Try the 2,016 SF Tycoon suite, which has a soaking tub on its terrace. 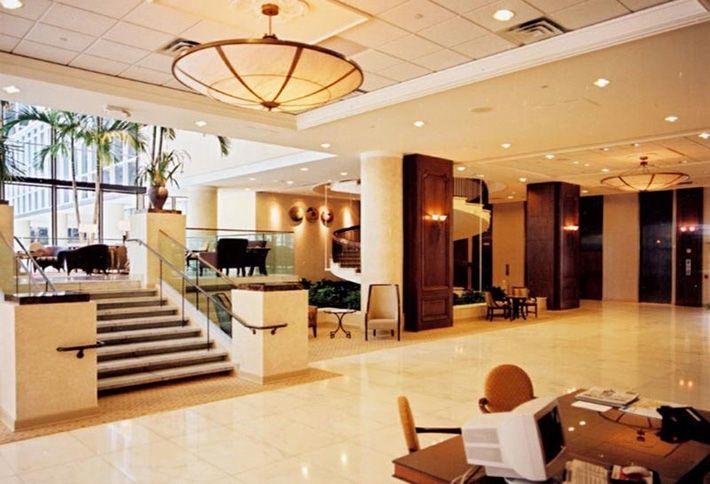 Crowne Plaza Houston Downtown, originally called The Whitehall, was designed by Welton Becket and Associates and opened its doors in 1963. Since its inception, it has been considered a business hotel, and has hosted such heavy-hitters as Bob Dylan, President Obama and VP Joe Biden.

The hotel was also connected via skywalk to the Enron (now Chevron) building and thus it was much used as a convenient meeting spot for company executives, particularly in those last days when the company was going under. 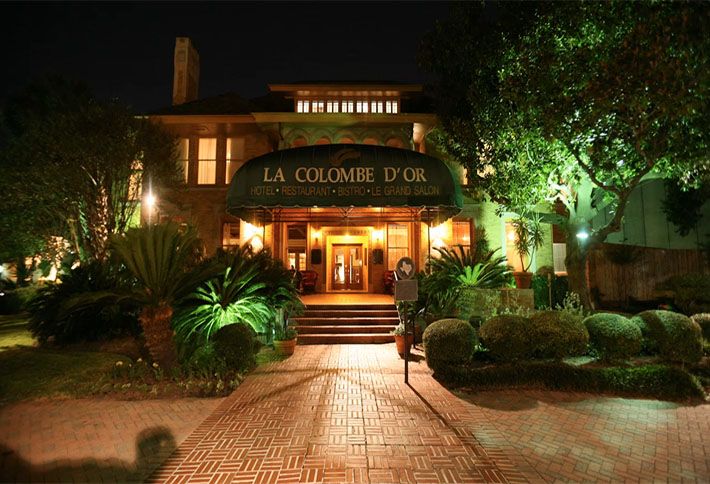 La Colombe d’ Or is a boutique luxury hotel nestled between River Oaks and Montrose. The historic mansion was originally built for W.W. Fondren Sr, founder of Humble Oil--now ExxonMobil. When Fondren died, his widow moved to River Oaks and left the mansion to the Red Cross, where it was used to house mentally-challenged children.

In 1979, Steve Zimmerman, an attorney and law professor, picked up the mansion when he was buying property along Montrose Blvd on the advice of Dominique de Menil. He opened the hotel in 1980. During the oil bust, he made a name for himself when he sold lunch in the hotel’s bistro for the price of the day’s barrel of oil.

In 2010, his sons took over and refurbished the historic property. Guests have included Desmond Tutu, Madonna, and President Clinton. 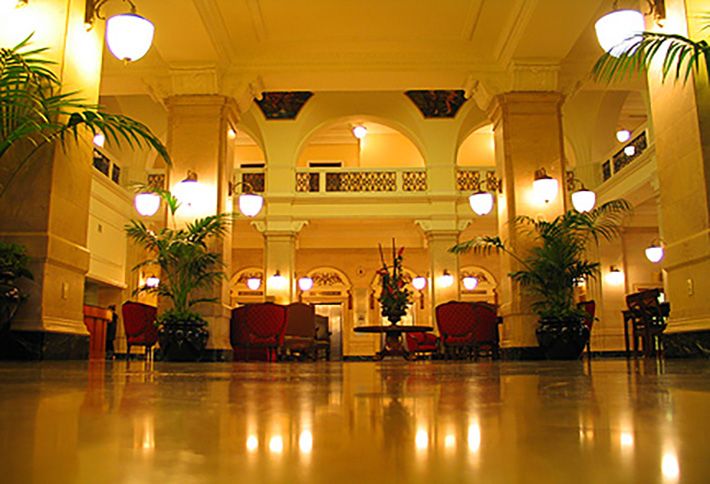 The Rice Hotel is now the Rice Hotel Lofts and renting by the month, not night, but we can't resist including it as a bonus.

The building at 909 Texas Avenue is the third to stand on that plot of land. The Rice Hotel was completed in 1913 on the site of the former capitol of the Republic of Texas and its history is just plain crazy. Its most frequent visitors were murder, suicide, and scandal.

In 1963, President John F. Kennedy visited the hotel the night before traveling to Dallas, where he was assassinated. Other guests included Groucho Marx and Liberace, Perry Como, Laurence Welk and Tommy Dorsey. The hotel was eventually turned into lofts, where you can sleep every night in the warm embrace of Texas history. Just last year, it sold to Crow Holdings.

Oh, and some people say it's haunted. Sleep tight.