Is The Green Roof Initiative A Bad Deal?

Denver voters will decide Nov. 7 whether to require developers to install green roofs on buildings more than 25K SF, a mandate many in the commercial real estate community say will have a lasting negative impact on the city for years to come.

Initiative 300, known as the Green Roof Initiative, proposes a percentage of the roof of any building more than 25K SF be dedicated to solar or green, vegetative space. Developers would be allowed to do a combination of green space and solar. If approved, the mandate not only applies to new construction, but also to existing buildings when it is time to replace the roof.

It would apply to hospitals, schools and condominium buildings, which all would have to pass on the costs to consumers, NAIOP Executive Director Kathie Barstnar said. The mandate would drive up building and maintenance costs, which would result in higher rents and housing costs, she said.

“St. Joseph’s is in downtown Denver, and that hospital would have to take valuable hospital dollars and put it toward a green roof as opposed to patient care,” Barstnar said. “A condo building run by an HOA would have to comply with this. HOAs don’t have large sums of money, so they would have to pass it on in the form of an assessment to their condo owners.” 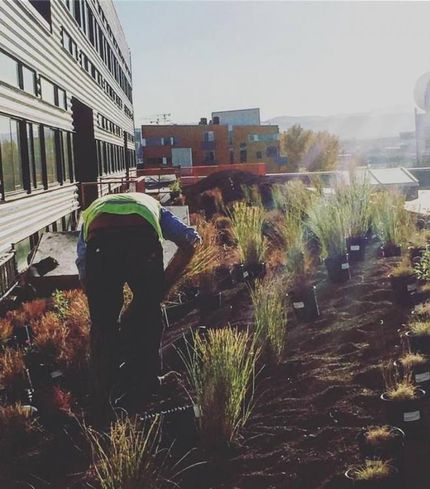 But Zeppelin Development President Kyle Zeppelin said developers have a responsibility to develop buildings that are more environmentally friendly and that the initiative will improve the quality of design throughout the city.

Zeppelin Development, which is installing green roofs on several of its buildings, has donated $5K to support the controversial initiative.

“This has a significant impact not just on building performance, but on livability,” Zeppelin said.

He also said stormwater runoff from the built environment has significantly contributed to pollution of the South Platte River.

“We have an urban waterfront that has so much economic potential, and we’re just abusing the environment,” he said. “We need to take some steps to be more green, more responsible and reduce the heat element effect. There’s no reason Denver can’t lead in this area. You don’t get there with just voluntary measures.”

During a Bisnow panel discussion earlier this month, United Properties Senior Vice President Kevin Kelley urged those in attendance to vote against the measure, saying many buildings are not structurally capable of doing green roofs. He also said the U.S. Environmental Protection Agency’s building constructed in 2011 with a green roof has not performed as expected.

“It’s essentially a brown roof,” he said. “Can you imagine all the buildings in Denver having brown roofs and the dust particulates floating around. It would be worse than the brown cloud. It would be an environmental disaster. We are in a semi-arid climate with limited water resources.”