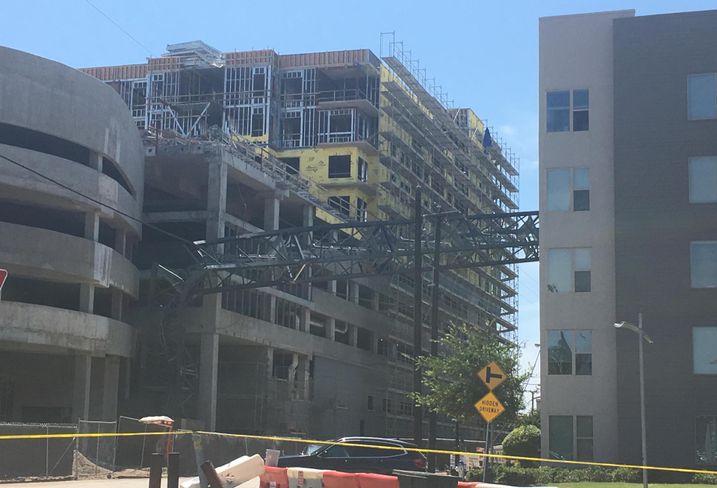 Bisnow
A crane damaged during severe weather in Downtown Dallas

A Greystar Properties apartment complex struck by a falling construction crane in Dallas during severe weather Sunday has been deemed uninhabitable.

Meanwhile, the lawsuit process has already begun and the plaintiffs' attorneys want a district court to keep the crane in place until lawyers can fully inspect the device and the surrounding premises.

It is the first shot in what is likely to turn into an all-out legal war against the many commercial real estate players involved with the Elan City Lights apartment development and The Gabriella apartment tower under construction next door.

It has been two days since a severe storm packing 70-plus mile per hour winds hit Downtown Dallas, toppling over a construction crane in Deep Ellum, killing one 29-year-old resident and injuring five others inside the Elan City Lights apartment development operated by Greystar.

The crane, operated by Bigge Crane and Rigging out of California, remains attached to the building. Greystar, the Occupational Safety and Health Administration and the crane operator were working Monday on plans to detach the damaged crane from the building, according to Dallas Fire.

Their client is a tenant who injured her foot while running for safety after the crane fell onto the premises.

The law firm, citing fear of disruption of critical evidence, asked the court to forbid the removal of the tower crane until the plantiffs' attorneys have time to inspect the premises.

"They want to move it, but you are moving out the scene," Friedman said. "Obviously things are going to change; something is going to go missing, somebody is going to move something and switch something. It's inevitable."

With hundreds of residents impacted and one woman losing her life, Jason Friedman said his firm's request for an injunction is designed to prevent the spoiling of evidence for all current and future parties.

"I am hoping to preserve it for everybody. I know the decedent [person who died in the accident] has a counsel out of Houston, Texas, and there may be other lawyers and people coming in."