The future extension of a relatively unknown limited access highway in Collin County could have sweeping implications for the future of McKinney National Airport.

Especially if McKinney Mayor George Fuller is right about its potential as a commercial service airport. 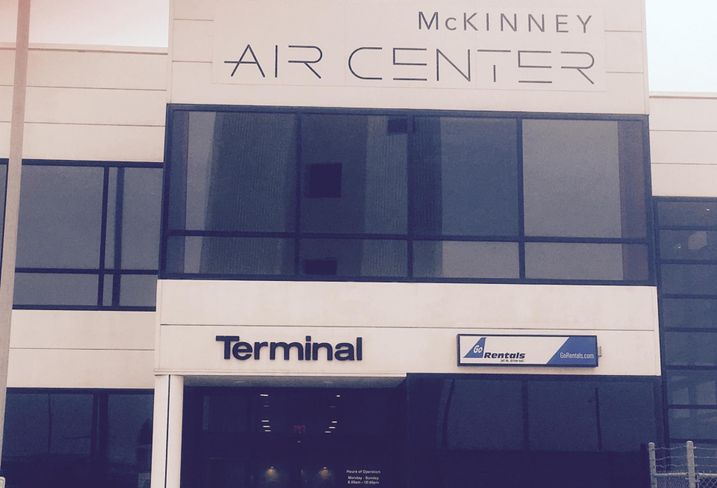 The Texas Department of Transportation is in the middle of evaluating potential highway alignments for U.S. Highway 380 and Spur 399. Spur 399 is a small appendage that connects SH 121 and Central Expressway to SH 5 in McKinney. As of right now, TxDot’s alignment study shows two possible extension routes for Spur 399 — one heading into the western part of the airport, and another to the east.

"The airport obviously needs a certain amount of space to be able to operate and so that also has been factored in," he added.

McKinney National currently hosts private jets and corporations looking for convenience and easy access to the Dallas-Fort Worth Metroplex. The airport produced $212M in economic impact for McKinney and surrounding areas in 2018 — up 382% from the $44M it generated in 2011, according to TxDOT.

The hangar space at the airport is consistently full, and plans are already in motion to build a new hangar and, possibly, extend the runway long enough so commercial airlines could, in theory, take off for international flights.

But a month ago, statements from the airport appeared to indicate the center was focused solely on corporate flights. Nevertheless, McKinney's mayor is optimistic about commercial travel, and at a bare minimum, he wants the city's infrastructure prepared for the airport's future.

Fuller admits divergent viewpoints exist over whether McKinney's airport will ever go commercial, but he said he has seen studies convincing him of the aviation center's potential as a gateway for commercial airline carriers.

“Unequivocally, passenger service is a possibility at McKinney Airport,” Fuller told Bisnow, but he made sure to point out he speaks only for himself, and not the rest of McKinney City Council.

“Now the debate becomes: Is it probable vs. possible?" Fuller said. "I believe firmly that airlines currently are looking at McKinney ... Remember, we are a million-person county growing to over 3 million. There are studies out there now that say the passenger service is viable.”

The city of McKinney supported the viability of such a plan more than a year ago when it paid $22.4M for 190 acres of land to the southeast of the airport. At the time, city officials wrote that commercial service is not imminent, but added that the land on the eastern side of the airport has been identified as “a future passenger service terminal and related infrastructure.” The city also indicated that DFW's rapid growth could foster the need for another passenger-service airport in the future.

With this in mind, all TxDot viability studies related to the construction or extension of McKinney highways — particularly Spur 399 by the airport — must take into account not just what the airport is, but what it could be a decade from now, Fuller said.

“I can tell you on [Spur] 399, we would very much like to see that on the east side of the airport,” Fuller said. “Ultimately, we see our airport as an airport that might provide commercial passenger service. If that is the case, we would really like to see that access ... on the east side of the airport where a passenger terminal would be located.” 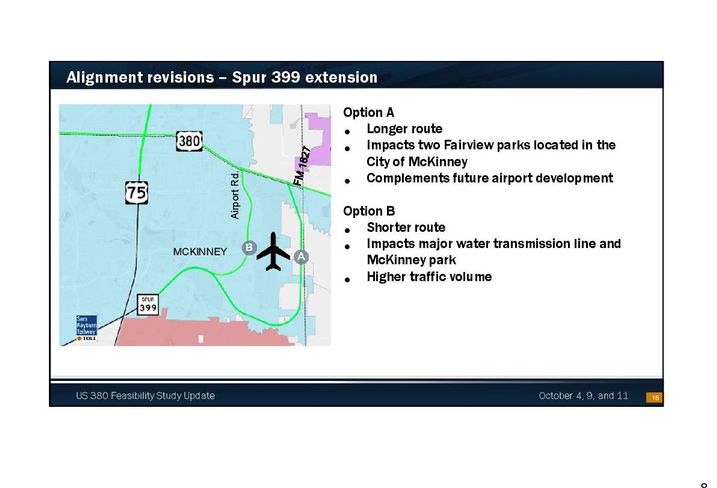 While Option A in TxDot’s alignment proposal appears to provide access to where the mayor's envisioned passenger terminal would be, preliminary TxDot calculations show this option could impact 14 residential properties, displacing up to six, and 10 businesses, with one facing possible displacement.

Up to 198 acres of wetlands, park and other natural habitats might be impacted. Plan A to the east of the airport comes with an estimated $433M price tag.

Option B would cost $266M and would impact four households, displacing two, while impacting 11 businesses, possibly displacing one. But only option A scores the highest in creating both long-term regional mobility and future economic growth, according to data TxDot made available on its website.

TxDot's Lafontaine said he cannot offer the pros and cons to the Spur 399 extension because TxDot is still in the assessment phase and nothing is finalized.

As far as considering the impact of future commercial travel, Lafontaine said this issue was never raised with him, but the airport overall is a major landmark when it comes to infrastructure development on the east side of McKinney.

“Each one of them is viable,” Lafontaine said of the two possible Spur 399 extension alignments to the airport. “And at the same time, they each have factors that we have to consider closely. There are parks there, there are wetlands there, and, of course, the airport is there. All of that has to be taken into consideration.”