Downtown Dallas landlords have been compelled to keep lease terms favorable because of the continued challenge of competing with newer product in the Arts District, Uptown and Upper Tollway/West Plano markets, according to stats from a Savills Studley rent index. 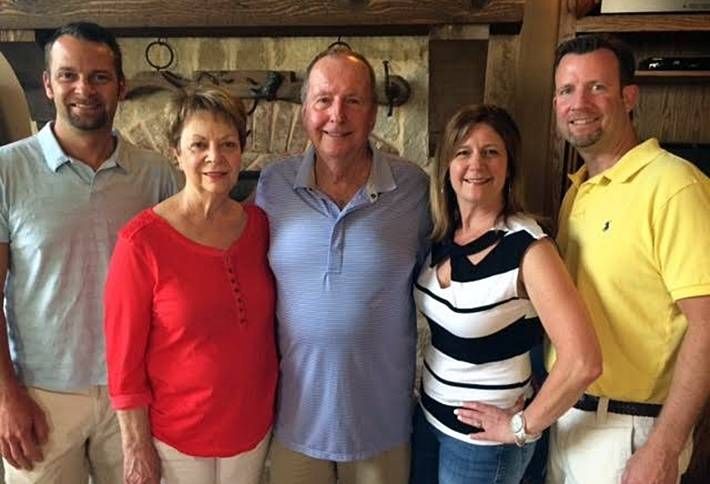 That means tenant effective rent (measured by taking the gross rents minus landlord concessions such as amortized TI costs and free rent) has seen a 3.3% increase, up to $20.15/SF, over the previous year's rental stats, says Savills Studley managing director Ric Kanatzar (far right, with his family). The Dallas CBD is similar to San Diego and Los Angeles, where the Downtown area lags suburban product, he says. Vacancy rates remain elevated due to many local and out-of-state firms looking to relocate into the newer product such as what's been delivered in the Uptown and Upper Tollway/West Plano markets. On the upside, Ric believes the CBD market growth will continue to rise as local and out-of-state tenants begin to weigh the increasing cost value that the CBD currently provides. 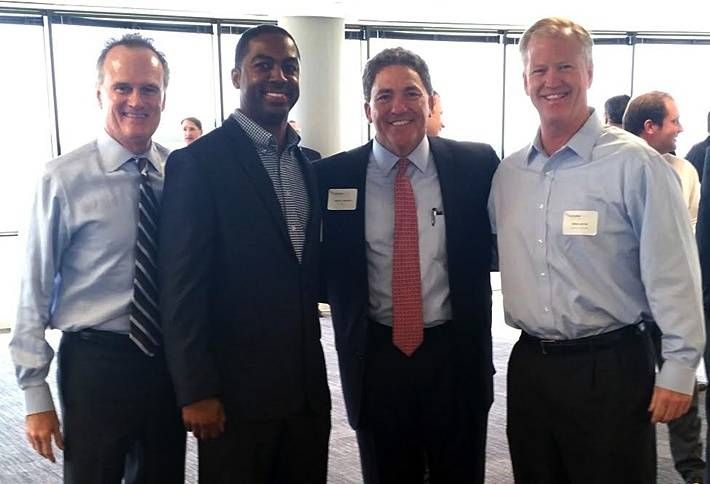 DTZ hosted a broker event to show off the latest renovations at Parkside Tower, 3500 Maple, for owners Champion Partners and Building and Land Technology. Here are JLL’s Calvin Hull, Jeremy McGown and Steve Jarvie with DTZ’s Johnny Johnson (second from right). Johnny tells us more than $10M is being invested to update the exterior and create a modern, welcoming lobby. The renovation’s new amenities will include an outdoor plaza, a new common lounge area with WiFi connectivity, a 5k SF fitness center, a café and a new entryway off Maple Avenue. Bonus for the brokers: they all got a new pair of running shoes from Run-On. 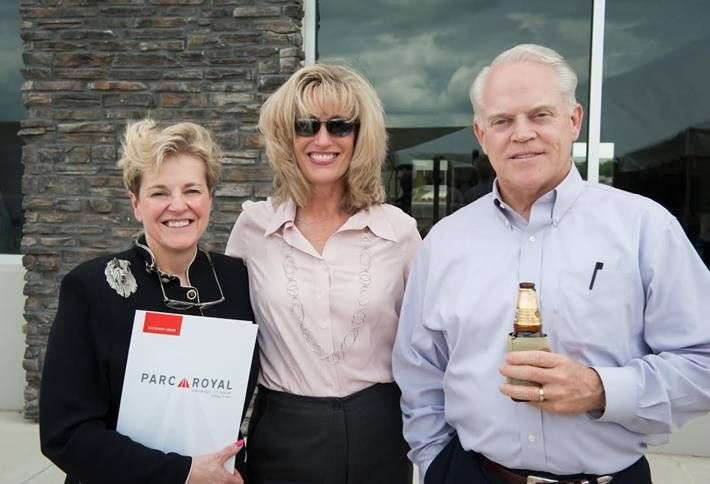 Trammell Crow Co hosted an open house for Legacy Tower. Phase 1 of the project includes a 13-story, 342k SF Class-A office tower. Highlight of the event was a performance by the uber-cool Dallas band The O’s.

Erik Stockglausner joined Stream Data Centers from Digital Realty, where he was director of enterprise sales.

Jeff Johnson joined Trademark as SVP of development. He will be responsible for leading land acquisition and pre-development efforts for new, ground-up and major developments of retail and mixed-use project. He comes from Fareway Stores, where he was director of real estate for the 112-grocery store chain.

E Smith Realty Partners just added three new executives: Will Haynes II as VP for leasing and management and Karen Loss and John Rischard as presidents of lease administration. Will’s responsibilities will include repping tenants and users of commercial office space in transactions from renewals, expansion, site selection, general consultation and purchases. He comes from the banking industry. Karen, John and a third member of the team, Tera Burns (lease administrator), all come to the firm from CASE Commercial Real Estate Partners.

Construction is expected to begin in August for Edgemere’s $36M expansion and renovation project that will include major additions to both independent living and health services. Edgemere will add more than 75k SF, including a 6k SF performing arts center with a bar and lounge, upgraded dining facilities, new apartment homes and suites, as well as assisted living, memory care and skilled nursing. Andres Construction will be the GC for the project. AG Architecture will be the design firm. Other project partners include interior design firm Looney & Associates and design consultants Faulkner Design Group and Kimley-Horn. Ziegler Capital Markets served as bond underwriter for the bond transaction. The project is scheduled for completion Q1 2018. 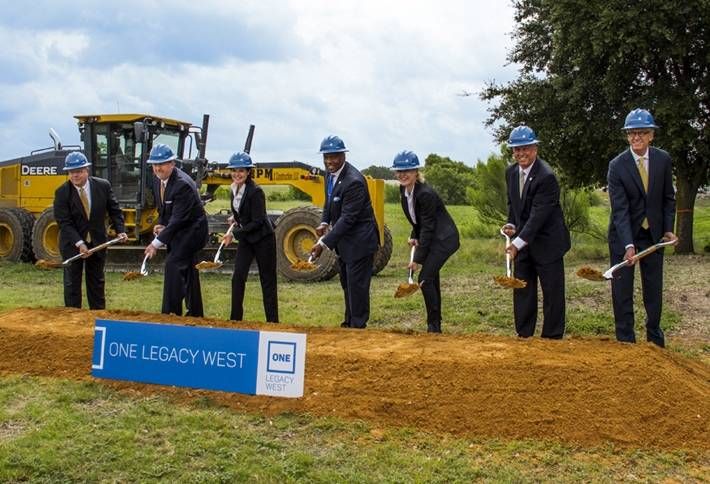 Gaedeke Group kicked off construction of the 328k SF One Legacy West last week. The spec office building is by the future HQ campuses of Toyota and FedEx in Plano and is the first phase of a 650k SF Class-A office project. The 11-acre site is at the southeast corner of Sam Rayburn Tollway and Legacy Drive in the $2B Legacy West mixed-use development and will be the first multi-tenant office space delivered there. One Legacy West will be ready for occupancy in Q4 '16. The 14-story project is designed to LEED Gold by Mark Dilworth (Morrison Dilworth + Walls). Austin Commercial is the GC and Andres Construction is construction manager. Pictured are Plano Mayor Harry LaRosiliere (center) and Mark Dilworth (far right) with Gaedeke's Dan Yates, Anthony Reynolds, Belinda Dabliz, Sabine Gaedeke Stener and Glenn Lickstein.

StreetLights Residential topped out on The Jordan Uptown, a new high-rise development on McKinney Avenue. Sitting on nearly one acre, the project site is just off McKinney Avenue at the Maple/Routh connection and Thomas Avenue in the Uptown area of Dallas. Designed by Gromatzky Dupree & Associates, the luxury 23-story high-rise residential development will include 212 units with one- and two-bedroom floor plans in addition to penthouse options. SLR is developing the project and SLR Uptown Construction is the GC. The interiors are being designed by Waldrop + Nichols Studio. The landscape will be designed by Studio Outside. Pre-leasing begins this fall and move-in is projected for January 2016.

Facebook is now in the dirt in Fort Worth. The tech giant will build up to three 250k SF data centers in the AllianceTexas development in north Fort Worth. Grading of the 100-acre property is already underway, and construction of Phase 1 should be done by June 2016. The $750M project (which could surpass $1B in capital investment with the second phase) are expected to be the world's greenest data centers based on energy usage, recycled water and other LEED attributes. Facebook researched more than 200 communities before selecting Fort Worth; the company received incentives from the City and Tarrant County.