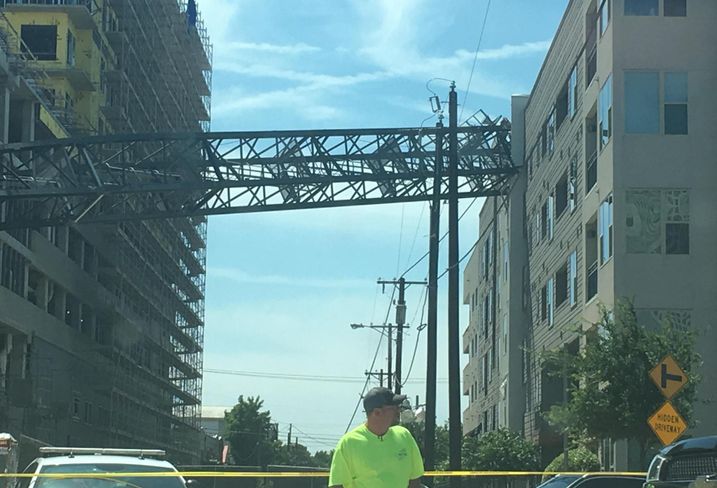 Bisnow
The construction crane that fell into the Elan City Lights Apartment building on June 8, 2019

OSHA's initial findings say California-based Bigge Crane and Rigging failed to follow certain manufacturer guidelines in the inspection and care of bolts on the Dallas crane "on or about June 8," the date of the accident.

The report does not elaborate on the accident itself; and it makes no specific mention as to why the Bigge-operated crane fell over during severe weather, striking the Elan City Lights building, killing one resident inside and injuring several others.

"I think [OSHA] has some explaining to do," said Dallas attorney Jason Friedman, who sued Bigge Crane after the accident on behalf of some of the injured and displaced residents.

"They spent six months investigating a crane collapse where numerous people were injured, there’s a woman who died, and the report fines Bigge for loose screws that 'could harm a worker'. This is unacceptable," the attorney said in a written statement to Bisnow.

Friedman filed suit against Bigge and other entities linked to the construction of an apartment tower in Dallas for causing the June accident.

OSHA documented a few "serious" violations on the part of Bigge Crane and issued a $26,520 fine against the crane operator this week.

In its limited findings, OSHA writes the employer "did not follow manufacturer's recommendations, when erecting and inspecting the Peiner tower crane, by removing bolts that showed rust, exposing employees to a struck-by hazard."

The handling of structural bolts on the tower crane also appeared among other "serious" level infractions that OSHA levied against Bigge Crane, according to the report.

In addition, the agency says in its report that Bigge failed to "inspect bolts for [a] loose or dislodged condition on the Peiner tower crane, exposing employees to a struck-by hazard."

The Dallas accident wasn't the only tower crane to take a civilian's life in 2019.

Two drivers along with two construction workers were killed earlier this year when a crane being used to construct a Google building in Seattle collapsed. Three construction companies were issued a total fine of $107K after an investigation blamed the premature removal of pins and sleeves on the crane.

A corporate counsel for Bigge Crane released a statement to Bisnow saying the company plans to review the Bigge Crane citations and contest them through the standard administrative process.

The firm also reiterated the need for a thorough investigation.

“OSHA has performed its inspection of the Dallas crane collapse. Our thoughts and prayers remain with all those who were affected by it. Bigge has fully cooperated with the inspection throughout," Bigge Crane corporate counsel Randy Smith said in a statement.

"As we’ve said from the outset, we owe it to those most affected by this tragic accident to get the independent investigation right. OSHA did not issue a causation report and did not allege Bigge was at fault in the accident. OSHA did issue two other citations, which Bigge is reviewing and will be contesting through the standard administrative process.”

UPDATE: DEC. 18, 4:00 P.M. CT: This article has been updated to include a statement from Bigge Crane.