But in the past 10 years, scientists, developers and architects have more hurriedly chased mitigation strategies to curb this so-called heat island effect. 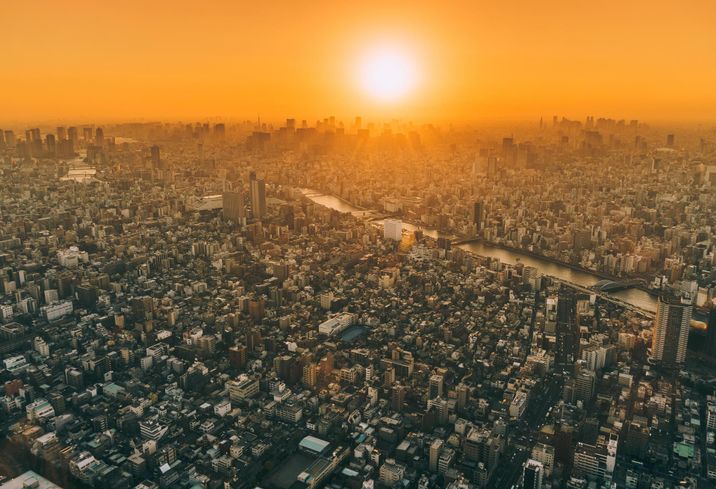 “We’ve known about the heat island effect since back in 1818,” said Ladd Keith, an assistant professor of planning and the chair of Sustainable Built Environments at the University of Arizona College of Architecture, Planning and Landscape Architecture.

“The urban heat island effect is the impact the built environment has on temperature. We have known for quite awhile that urban areas with more buildings and urban surfaces and mechanical processes have a much higher temperature than the surrounding countryside, so that is something you can map out and you can see the higher temperatures [on the map] and it looks like an island.”

If this phenomenon has been around for two centuries, why should the urban real estate community pay attention to it now? The U.S. has been getting hotter since 1970, with the densely populated, asphalt-covered cities getting even hotter, Climate Central.org notes. In the summer of 2018, the World Meterological Organization issued a warning of extreme weather conditions, saying July 2018's heat had “widespread impacts on human health, agriculture, ecosystems and infrastructure.” It added that “cities are particularly vulnerable to such risks due to their high density of population and economic activities.”

GLHN Architects & Engineers mechanical engineer Henry Johnstone said he has been studying National Oceanic and Atmospheric Administration weather data for the past four years and going over temperatures for the last three decades.

“We can easily demonstrate that [the temperature] has been rising in the order of one-and-a-half degrees Fahrenheit every 10 years,” Johnstone said.

Growing cities have made the issue even more pressing.

“I think one of the big things is cities have gotten much larger as the population has grown in the United States and coupled with that is climate change,” Ladd said. “It you add a couple degrees of temperature from the hottest days of the year because of climate change, then it becomes something that health officials and urban planners are really starting to take note of because … it has so many impacts on the economy, public health, urban plans and landscapes.”

It has only gotten worse since then. July 2019 set a new record for hottest month ever globally, according to the NOAA.

“The real focus of the report is looking at the solutions that are being developed alongside recognizing the problem and the challenges of heat,” ULI Vice President of Urban Resilience Katharine Burgess said.

From the planting of trees and vegetation to the use of light-colored surfaces, building envelopes and canopies, the report highlights strategies that have already achieved effective heat mitigation in cities.

The surprise fringe benefit? Many of these tools are considered good design and are being implemented anyway.

“We saw developers incorporating heat mitigation measures … through a sort of holistic placemaking approach, which can drive retail traffic,” Burgess said. “I think ultimately the designers and developers we interviewed use a range of best practices to deal with extreme heat.” 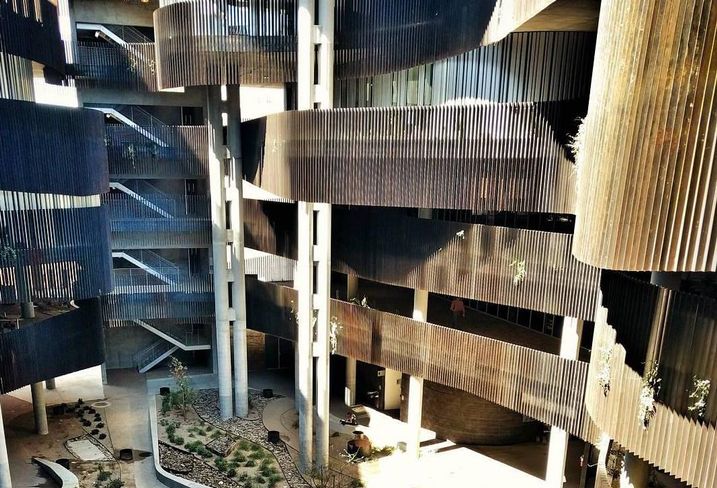 Courtesy of Ladd Keith
The Environment and Natural Resources 2 Building on the University of Arizona campus.

Several developments in the Southwest were highlighted in ULI’s study as poster children of heat mitigation.

In the middle of the desert, the University of Arizona campus raised the bar for constructing buildings capable of self-cooling with the campus' Environment and Natural Resources 2 building.

The facility has no lobby and is instead situated around a courtyard where outdoor balconies covered in fin-like materials hang off each floor, providing shade to the courtyard and the pedestrian areas.

Architects and engineers frequently tour the building to look at heat-mitigation strategies and cooling concepts. The building's exterior alone reduced summer energy consumption by at least 40%, according to ULI.

“Probably the most sustainable thing we did with that building was make it a third smaller than it should have been, and the way we did that was we used outdoor space so the courtyard and the outdoor circulation balconies that are in the courtyard are the way people circulate through the building,” said Peter Dourlein, University of Arizona assistant vice president for planning, design and construction and campus architect.

A smaller building “means less space to maintain, so if you’re a developer … that is less materials to paint, less flooring to replace, less ceilings, less conditioning of the air,” Dourlein said.

The building also incorporates vacancy sensors in its offices and low velocity underfloor air systems to promote cooling and energy consumption, Dourlein said. Plants strategically situated on each of the courtyard balconies also promote transpiration — a natural process that promotes cooling within the courtyard.

But Dourlein admits not all of the cooling amenities inside ENR2 are cost-effective for developers.

“We are not going to flip our building. We are going to own it for its life, and so we do look at life-cycle costs where that may not be as [cost-effective] in a commercial setting outside of an institution where there is probably quite a bit more emphasis on upfront costs,” he said.

“The building on the university campus we did a fair amount of work to analyze the cost-benefit analysis and over a 30-year life of the building it was a prudent investment, so it certainly demonstrates in the academic class of buildings that this was a worthwhile endeavor,” engineer Johnstone said.

While it may be harder to incorporate some of the higher-priced amenities on commercial buildings, experts see significant progress being made with the utilization of vegetation and trees. 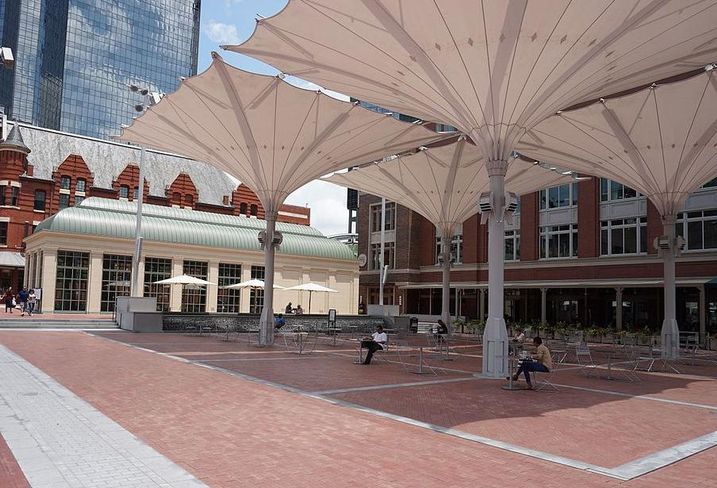 Trees are a major feature at Fort Worth’s Sundance Square Plaza, a former 2-acre parking lot transformed into an outdoor venue that serves as Fort Worth’s living room and a gathering place for residents and pedestrians Downtown.

ULI highlights the plaza’s implementation of tree-lined walkways and 6-foot mechanically operated shade umbrellas that offer nearly 6K SF of natural shade. These simple elements create a natural cooling effect in what was once a wide-open space, but any of the design elements' positive impact on the heat-island effect wasn't intentional.

“When I first got the call from ULI, they used a lot of words that we really didn’t use,” Sundance Square CEO Johnny Campbell said. “We didn’t talk about the heat island effect, and the trapped and retained heat, as much in our development. It just happens that what we were trying to do was very congruent in terms of all of the things ULI was studying.”

And what Sundance Square Plaza was trying to do was keep pedestrians cool during scorching summer days, making it a more pleasant place to be. The tools they used — trees lining sidewalks and canopies — had a positive impact on the broader heat island effect in Fort Worth.

“I was really excited that ULI found us and looked at this as an example. I thought it was a happy coincidence the developer's [initiative of] looking for a way to make a great place for people to do business lined up so neatly with the aims of ULI’s study about mitigating the heat island effect.”