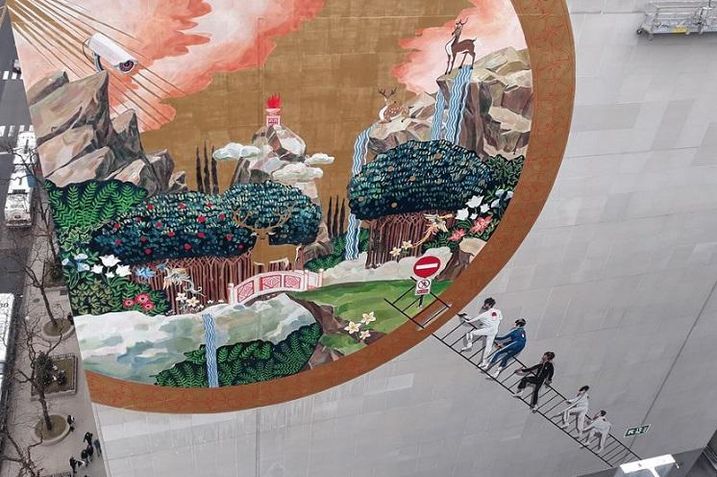 Downtown commercial real estate isn’t always about dollars and cents. Landlords have increasingly decided to enhance their properties’ visual appeal through public art, including paintings, video displays and sculpture, even if they can’t measure the impact on lease rates.

Meyer Bergman had a chance to demonstrate this after buying three connected buildings in 2015 on the 600 block of North Michigan Avenue. The nine-story property’s north face is a bare, gray concrete wall, a perfect blank canvas visible to thousands of pedestrians each day.

“It has great sight lines, so we always viewed the wall as a great opportunity, where we could do something interesting, and on a very large scale,” Head of Asset Management Jill Elia said.

The company recently made the wall home to Spanish artist ​Ignasi Monreal's​ latest creation. Shoppers now see a set of human figures climbing a ladder on the building’s north face to what appears to be a Renaissance-style vision of paradise, though with a few disturbing, modern touches — including a surveillance camera.

“We wanted to bring some color to this location, but it was never an equation where you can say we’re getting back X by putting in Y,” Elia said.

The company considered other artists for the project, but was particularly impressed by the 27-year-old Monreal’s campaigns for ​Gucci​, ​Four Seasons​, ​Louis Vuitton​, ​Dior​, ​Louboutin​, ​J.W. Anderson​ and others.

Meyer Bergman sees this property, bought for $295M, as a long-term hold, so being a good neighbor is important, Elia said. After receiving very positive community feedback on the mural, it may decide to keep experimenting.

She said it will definitely keep the mural for at least six months, but will then consider making a change, giving another artist a chance to brighten up the Magnificent Mile.