Open Office Concept Isn't Dead, But Does Require A Lot Of Care And Attention

The open office concept, once the darling of cutting-edge tenants, comes in for a lot of criticism these days. Major media outlets fill pages with horror stories about workers who lose productivity in the more social environment or who can’t hear phone conversations due to the background drone of colleagues, with some saying they can’t hear themselves think or have the private talks sometimes necessary in an office.

“We hear a lot about how the open office is terrible for introverts, and how it’s ruining everybody’s life,” HKS Architects Director of Commercial Interiors Kate Davis said. 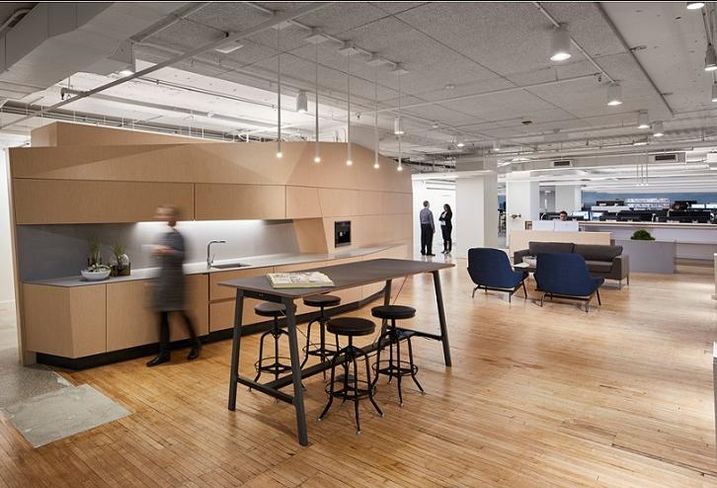 But the open office is not dead, and interior designers and architects like Davis have begun digging deep into the operations of their corporate clients, helping them move beyond the simple layouts that strand employees in seas of workstations.

“Companies do push back sometimes [against open-office concepts], and I think that’s short-sighted,” Eastlake Studio partner Christina Brown said. “I’ve been in places where the open office concept didn’t work, and it’s usually because it wasn’t thoughtfully done, and there was no buy-in from the workforce.”

She will speak at Bisnow’s Chicago State of Office event on March 18.

Doing open office right involves a heavy focus on small details like lighting, and a lot of upfront research, a time-consuming process that some companies would prefer to avoid. But designers say it is only after understanding how everyone in a given office completes their daily tasks that architects can create a series of unique spaces that promote efficiency and health, as well as privacy.

HKS, a Dallas-based architectural firm, went so far as to transform in 2017 its Chicago office at 125 South Clark St. into a “living lab,” an experimental space where it constantly tests and measures the impact of office changes on its roughly 50 employees.

The firm began by administering personality tests for everyone, and then shared the results, so each person, whether an architect, designer or support staff, better understood how they work, and what kind of spaces they need. Davis led the subsequent design effort. The office is open, with unassigned seating, and the firm included a large reception room known as The Plaza, which welcomes guests and gives employees a place to socialize.

Private breakout areas and meeting rooms with special acoustics were also placed around the 13K SF office, along with a large multipurpose room known as “The Park,” where designers can play table tennis or visit the firm’s library.

All the one-on-one interactions with the staff didn’t just help HKS design the office, Davis said. It also helped employees gain the confidence needed to move around the office and use whatever space was helpful.

“People were ready to embrace this new way of working, and were comfortable saying, ‘I’m going to go sit on the terrace, and clear my head so I can do some deep writing.’”

Dallas-based HKS principal Leah Ray said she is in the Chicago office once a week, and as a partially deaf person, tends to be loud, so the office’s private spaces have become important to her.

“I’m a nightmare in an open office,” she said.

As a living lab, the space hasn’t remained stagnant since the original design, according to Davis. HKS conducts surveys of all employees, gauging both changes to the office layout, and adjustments to environmental factors.

“Our workplace is a machine that we’re always fine-tuning with quantifiable data,” Ray said.

Surveys show employees are more satisfied with the office’s acoustics and lighting, as well as water and air quality, than the old office, with many reporting they even sleep better at night.

HKS uses survey results like this to show its clients the benefits of deep engagement when doing a redesign. Many of these clients struggle to recruit and retain scarce talent, and perhaps the most important information HKS can report from its experiments is a 9% boost in the number of employees coming into the office, even with the firm’s new flexible work policy.

“If people are voluntarily coming into the office, you’re in a better position to win that talent game, because those are employees that are going to stay,” Davis said. 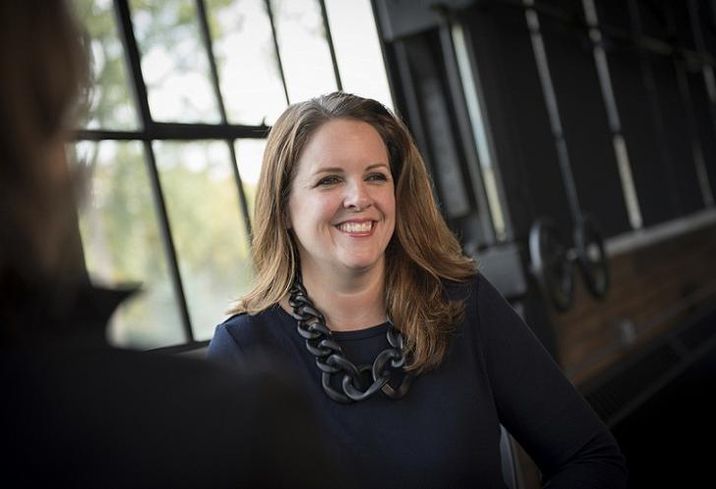 Brown credits the leaders of ActiveCampaign, a Chicago-based marketing software company, with involving its entire workforce in the ongoing renovation by Eastlake of its new office at One North Dearborn. Discussions with staff showed ActiveCampaign has an open, egalitarian culture, and depended a great deal on collaborative work. That meant an open office fit its culture, with even the CEO sitting out in the open space with everyone else. At the same time, most employees also wanted a refuge from the hurly-burly of the workday.

The employees and design team identified one portion of the office everyone referred to as “the sad space,” Brown said, a small area surrounded by elevator cores, and accessible by just one narrow aisle. Instead of consigning a group of employees to the isolated space, which would not have fit the firm’s open culture, the team decided to transform it into a game room and decompression zone for the whole office.

The need for private spaces to complement the open office also led Eastlake to create dozens of meeting rooms. But instead of using a cookie-cutter design, Brown said they built a wide variety, including some stocked with high-tech presentation tools, and some with no tech devices.

But the biggest challenge for Brown and the Eastlake team may be ActiveCampaign’s rapid growth. The company had roughly 40 employees when it began negotiating for about 25K SF at One North Dearborn, a circa 1910 building, but before it could sign a lease it ballooned in size until it needed a full floor of 50K SF. And after Eastlake designed that office, the company in this past year grew to about 300 employees, Brown said, and needed an additional floor, a serious concern for a company where everyone works so closely together.

“We asked ourselves, ‘how do we make it egalitarian so people don’t feel that they’re on the good floor or the bad floor?’” 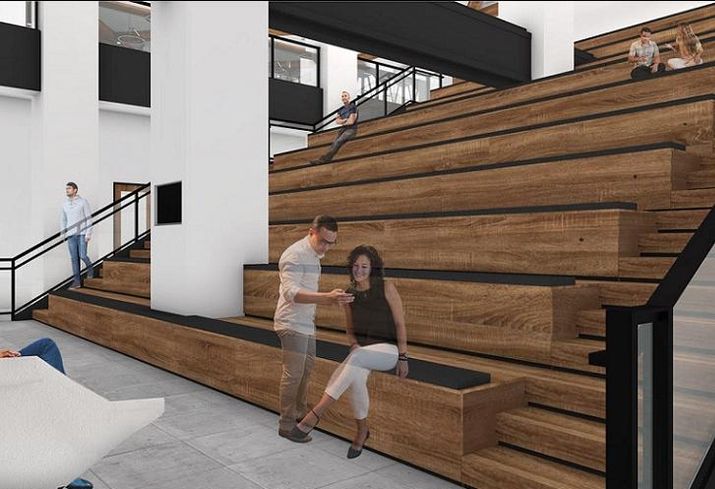 Courtesy of Eastlake Studio
The plan for ActiveCampaign's grand staircase

It was decided to join the two floors with a 50-foot-wide staircase that will also help create a gathering space with enough room for hundreds of people and make it easy to go from one floor to the next, Brown said. Eastlake also plans to build out a theater space for about 100 people, where ActiveCampaign wants to hold TED talks and other events. In addition, the office will get even more private meeting rooms, eventually having around 150 on its two floors.

A lot of companies include such components in their offices, but Brown said without an inclusive design process, they may not get the details right. She understands some office users don’t want to raise employees’ hopes about what their new office will look like, only to be disappointed when cost concerns get in the way, but said those concerns are overblown.

“People understand not everything they want can be included, and if they have been brought into the process and asked what their preferences are, it makes it easier to get to the next step.”

Davis admitted few office users can go to the lengths HKS took with its employees when designing the laboratory, especially the personality tests and in-depth surveys. But they can learn from what HKS did.

Davis advises that along with including a wide variety of spaces, office users need to pay attention to what may seem like small details, like acoustics and lighting. These can make the difference between a comfortable open office and one that causes headaches. Frequently, that will involve bringing acoustical and lighting engineers into the redesign effort.

“The open office isn’t in and of itself the problem, it’s that these other things don’t get solved.”

But firms also shouldn’t forget why open offices became such a fad in the first place, Ray said.

HKS’ new office in 125 South Clark St., also known as The National, was previously home to Chicago Public Schools before Blue Star Properties bought and renovated the 580K SF building starting in 2016. During a recent open house event in the building, Ray met a CPS employee who was walking through what had been her heavily walled office, and she was surprised at the spectacular views of downtown.

“She said, ‘I worked here for 20 years, and had no idea this was the view from this window.’ There are a lot of great things about ripping down walls.”