Mixed-use developers tackling adaptive reuse projects always search for ways to generate foot traffic. Many craft strategies to create authenticity, a difficult concept to define, but one of growing importance to the younger generation of renters and shoppers.

Sometimes developers come across a property with its own good luck charm: a retailer that already generates traffic and plays an important role in its community. Then the developer has to decide how far it will go to hold onto that tenant. 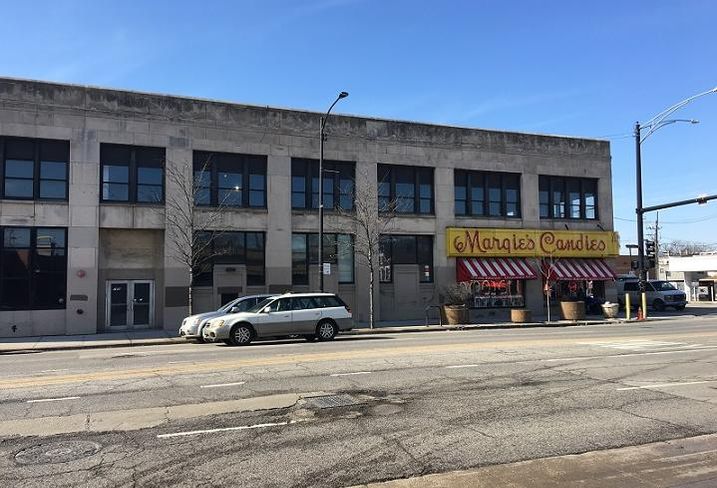 That was the situation Baum Revision found itself in several years ago as it eyed a gray, mostly vacant building sandwiched between Chicago’s Logan Square and Bucktown neighborhoods. The former bank building at 1965 North Milwaukee Ave. had a bright spot: Margie’s Candies, owned by several generations of one family for more than 90 years. It drew crowds with its homemade candy, giant sundaes and funky décor, including 1950s-era mini-jukeboxes at every table.

New luxury housing had begun to sprout up on many of the surrounding streets, and with the CTA’s Blue Line just steps away, the two-story structure looked like a prime location for new apartments. A lot of new retail has surged into the area as well, and some developers might have looked upon a place like Margie’s as out of step. But Baum’s principals felt otherwise.

“Many people in Chicago have great memories of spending time at Margie’s, and we viewed it as a place that was important to the community,” Baum Revision Chief Operating Officer Todd Glickman said.

The company and its partner Outpost Development bought the 29K SF building in 2016 for about $3.8M, and quickly agreed to include the candy store in its renovation plan.

Glickman said keeping legacy retailers like Margie’s is not just about nostalgia, and does not have to be a charitable act. The store still attracts a huge number of customers, and on many nights, lines of people waiting to get in stretch around the corner, Glickman pointed out.

“Margie’s is very creditworthy, and we are still getting market-rate rents for this space.”

And with Margie’s as an anchor, the new owners decided to recruit a set of other unique and authentically Chicago retailers for the remaining retail spaces. It will announce the new lineup in the summer, and shortly after begin opening the 20 new apartments upstairs.

“There are already a lot of cookie-cutter outlets in this area, like McDonald’s, a new Starbucks and several others, but every retailer that we are bringing to the building is a great Chicago business with an existing customer base,” he said. 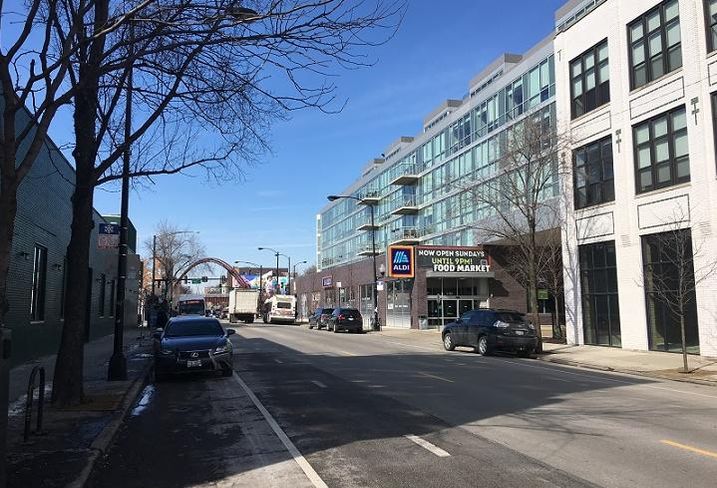 A similar situation played out just a few blocks from Margie's Candies. John McLinden and his colleagues at Centrum Partners saw a lot of potential for a new multifamily development on a 2-acre piece of land near the 606 Trail in Bucktown.

A possible complication was that it had been owned for decades by Aldi, a Germany-based discount grocer, and occupied by one of its highest-performing stores.

“We knew there was a higher use for these 2 acres considering the location, but the store was so successful the company would never have sold it to us just for market value,” he said.

A fatter payday would also not entice the grocer into selling, he said. The firm was in the midst of a national expansion, bringing it into competition with Whole Foods and other brands, and holding onto this hot corner was essential.

Worst of all, constructing a new multifamily development required the store to close for at least one year, and few retailers will agree to simply go out of business for an extended period.

Centrum caught a lucky break. Aldi was also in the midst of a $1.6B nationwide renovation plan, and wanted to remodel the aging store. The developer said it would buy the land and completely reconstruct the building, at no cost, into the ground floor of a six-story, 94-unit multifamily complex with affluent renters, an offer that solved several problems.

“Instead of having to spend a lot of money, they received a check,” McLinden said.

“It allowed them to free up an asset, put some cash in their pockets, and keep a profitable business running. At the end of the day, deals don't happen unless it makes sense to both parties.”

“This was an almost unique situation, but it’s exactly the kind of deal you look for,” he said. “They have to be a creditworthy tenant and fit within the entire development plan, and that does not happen very often.”

“Making a million dollars on a sale is not a big deal for them," McLinden said.

The new Aldi also opened up, and sales have been brisk, even though it now sits in the middle of an affluent community after serving what had been a low-income neighborhood when it first opened in the 1980s, McLinden said.

“At a public meeting to discuss this project, we were asked by several people, ‘Why not put in a Trader Joe's, or something upscale?’ But this Aldi is still one of the company's most profitable stores. They have found that affluent customers, like the ones who live in the building, still like to stop in at the end of the day and buy basic products.”

Holding on to a legacy retailer can also build support within the existing community, an important consideration in Chicago, where local City Council members make many of the final decisions on new development.

Leah Root, the past president of the Wicker Park Committee, a neighborhood group that carefully considered Centrum's plan before eventually giving approval, said holding onto the legacy retailer was a wise move, community-wise.

“I think there would have been an outcry if the Aldi went away,” she said.

Many young people moved into the area, and millennials typically prefer stores within walking distance, and need cars to reach other chains such as Jewel and Mariano's. Other boutique groceries, including Olivia’s Market, are within walking distance, but perhaps too pricey for many new residents, making the Aldi a true benefit for the neighborhood.

Root also said the relatively recent influx of high-income renters and homeowners has not completely transformed the neighborhood.

“People in the community are very aware there are still many families without much money, and they need a place to shop.”

Tenants at new mixed-use communities have made it clear they don’t want to live in antiseptic spaces, so many developers now recognize the importance of building such rapport with other neighborhood residents, whether by engaging popular local businesses or providing public meeting spaces open to all.

Doing it right often means developers have to carefully curate their spaces, rather than simply renting them out, and sometimes spend more, at least in the short-term.

Baum’s Glickman said it is worth it.

“Development is not an easy business, and sometimes the cheapest and easiest path is not the best way to get things done.”