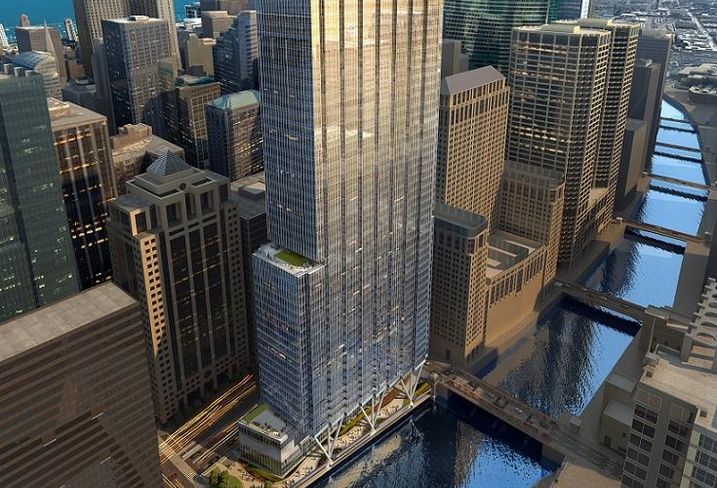 When Howard Hughes Corp. and Riverside Investment & Development put the finishing touches on it next year 110 North Wacker Drive will be Chicago's tallest new office tower in 30 years, but a corporate shake-up in Texas could put it on the marketplace.

Dallas-based Howard Hughes announced late Monday that Paul Layne, president of its Central Region, will step up to the CEO position, replacing David Weinreb. President Grant Herlitz will also exit the firm, and the HQ will move to the Houston area.

According to a document filed by Hughes with the Securities and Exchange Commission, the company's reorganization also means streamlining operations and unloading what it calls non-core assets, including the 1.5M SF 110 North Wacker, in the next 12 to 18 months.

The company estimates it will garner around $2B from the sales, which would also include properties in New Jersey, Dallas, New Orleans, Charlotte, New York, Sacramento and Salt Lake City, all outside its master-planned communities like The Woodlands in Houston.

It could be an auspicious time for a property like 110 North Wacker to hit the market. The leasing effort is considered a success, and Layne said late this summer, 15 months before the opening, that tenants were already set to occupy about 1M SF. Blue-chip law firms like Jones Day, Perkins Coie and Morgan Lewis & Bockius recently agreed to deals, along with anchor tenant Bank of America, which signed a 530K SF lease in 2017.

Chicago’s Central Business District saw a major investment slowdown in the first six months of 2019, with office investment totaling just $244M, the lowest first half total for any in two decades, according to a MBRE report. But recently things started to perk up.

Spear Street Capital, a San Francisco-based investor, was ready to plunk down between $415M and $425M, or about $440 per SF, for 500 West Monroe St., a 967K SF tower owned by Piedmont Office Realty Trust, an Atlanta-based REIT, Real Estate Alert reported earlier this month. And then Crain’s Chicago Business reported that Beacon Capital Partners, a Boston-based firm, was preparing to buy 190 South LaSalle St., a 40-story tower, for about $230M.

Howard Hughes' headquarters is moving to The Woodlands, eliminating the existing holding-company structure, and replacing it with a lean, decentralized corporation, one where regional managers of the master-planned communities wield more power.