Most Chicagoans know the historic structure at 30 East Adams as home to Miller’s Pub, but on June 27, CEDARst Cos. will unveil the renovated building, which now boasts 176 new FLATS-brand apartments. Called The Alfred, after its designer Alfred Alschuler, a Chicago-based architect best known for the landmark London Guarantee Building at the Michigan Avenue Bridge, it is the firm’s most recent adapted reuse property and its first FLATS project in the Loop. 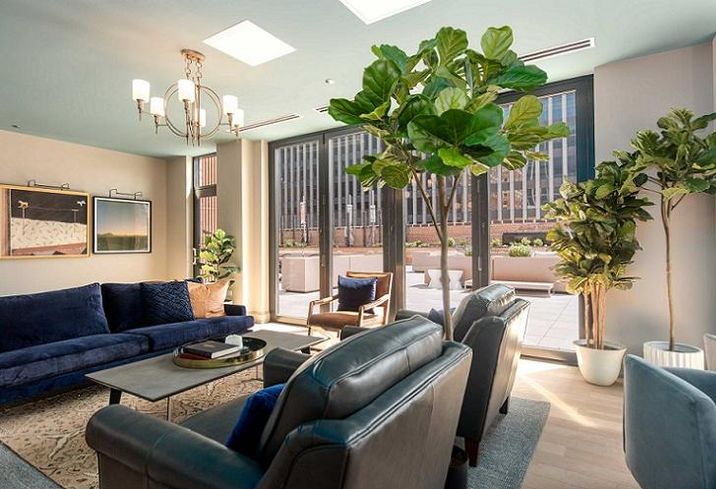 Courtesy of CedarSt Cos.
The rooftop of 30 East Adams

CedarSt restored the brick and terra cotta facade and replaced its Chicago-style three-paned windows as well as the original bay windows. Elevator door detailing from the original office building was also preserved.

“We feel privileged to breathe new life into another amazing historic work of architecture,” CedarSt Cos. co-founder and Managing Partner Alex Samoylovich said. “You don’t see craftsmanship like this anymore.”

The company will use historic preservation tax credits from the National Park Service for this project, its third application for this program in the last five years, after The Lawrence House in Uptown and The Bush Temple in River North.

It also created a rooftop amenity space for the residents, including a lounge featuring a kitchen, a pool table, desk-style seating, a game table and a large outdoor deck surrounded by greenery.

The building has 88 studio apartments, 77 one-bedrooms and 11 two-bedrooms, along with a Heritage Outpost coffee shop, its third location in a FLATS building. 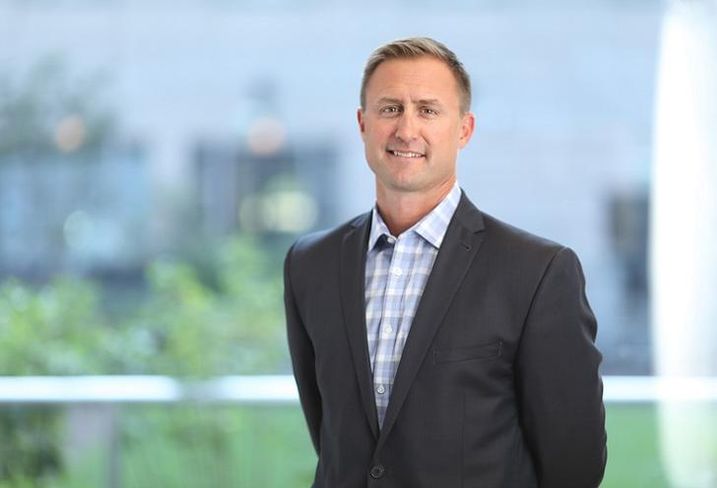 Liberty Property Trust tapped Neal Driscoll, vice president and market officer for Illinois and Minnesota, to oversee the company’s 19M SF portfolio across the Midwest. He will add properties in Cincinnati/Northern Kentucky, Columbus and Indianapolis to his responsibilities. 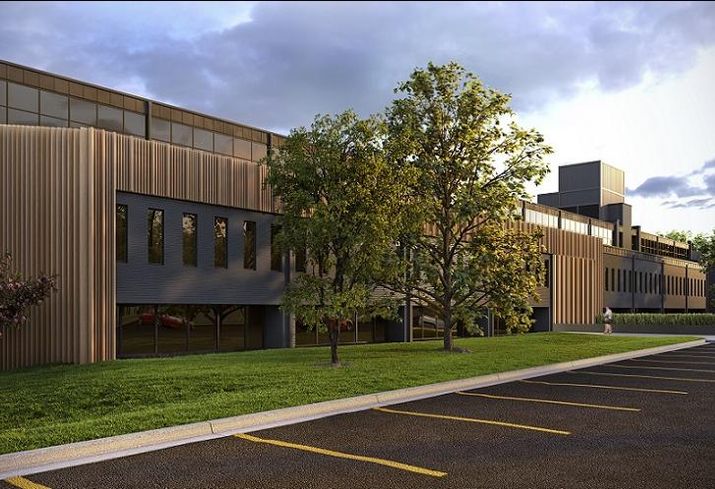 Clear Height Properties outlined its modernization and repositioning program for the 26TWENTYFIVE office building in suburban Oak Brook as it readies to begin construction. Last summer the company and its joint venture partner Corcoran Commercial Real Estate acquired the 200K SF, multi-story office building that sits on 10 acres at 2625 Butterfield Road. According to Jason Pammler, managing director, project and development services, the modernization will include enhancements to the facade, upgrades to the base building electrical system, clarified wayfinding signage, a complete overhaul of the common areas and the addition of a tenant conference center and state-of-the-art fitness center. NAI Hiffman’s Adam Johnson and Ryan Maher are the exclusive leasing representatives for 26TWENTYFIVE. 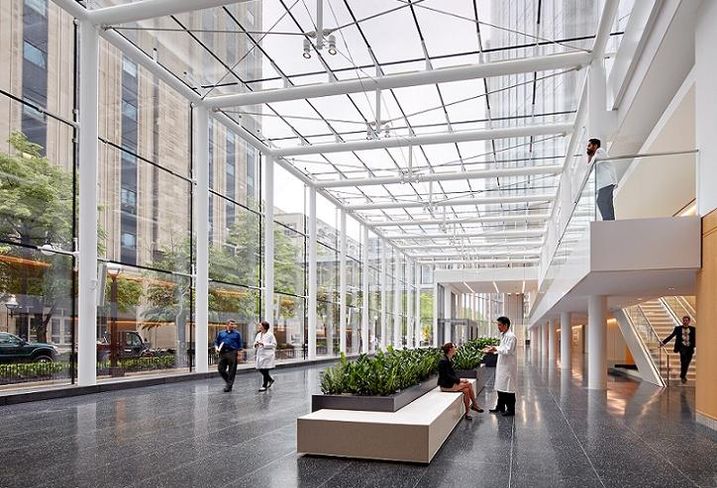 Courtesy of Perkins+Will
The atrium of the Louis A. Simpson and Kimberly K. Querrey Biomedical Research Center at Northwestern University

Skender, serving as general contractor, completed the 30K SF interior build-out at 500 West Monroe St. for Corix Group of Cos. The water, wastewater and energy utility firm consolidated its offices across North America to downtown Chicago. The new offices will immediately house approximately 70 employees. The West Loop location, close to suburban train lines, will allow the firm to draw talent from the both city and the suburbs, Corix officials said. Skender collaborated with architecture firm Nelson, owner’s representative Colliers International and engineering firm Environmental Systems Design to complete the project. 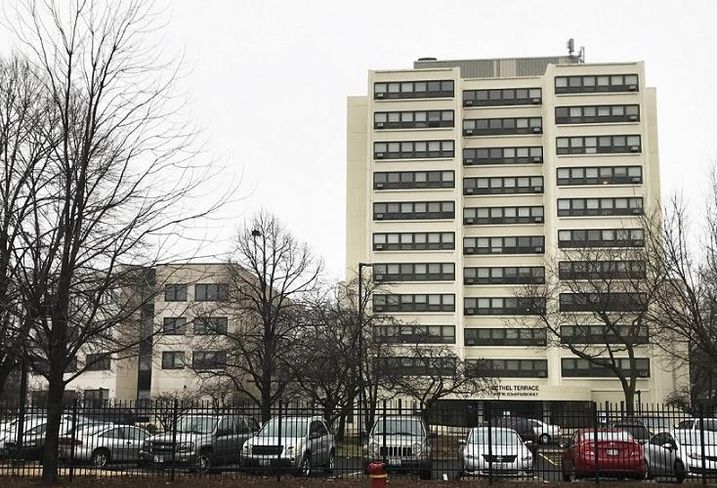 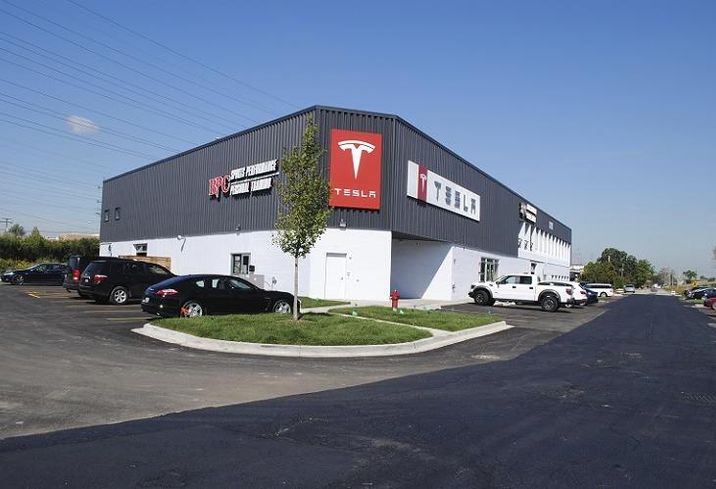 Berger Asset Management, a Chicago-based firm, completed the sale of the Tesla Building at 1200 Old Skokie Valley Road in Highland Park. The buyer, a private investor from Hawaii, acquired the building in late May as part of a 1031 exchange. The two-story building totals 52K SF, of which Tesla occupies about 32K SF. Bystol Performance Center, a sports performance and personal training firm, occupies the rest. The Equitable Group of Cos.’ Joshua Silverglade represented Berger.

SEDCO Capital, a Saudi Arabian asset manager, purchased a FedEx Ground-leased distribution facility in suburban Niles. The property was purchased via a separate account managed by ElmTree Funds LLC, a private equity firm. The 306K SF facility, located on almost 40 acres at 5959 West Howard St., was constructed in 2015 as a build-to-suit for FedEx Ground, which has approximately 11 years remaining on its lease.

A single-tenant net-leased Walgreens property at 11981 West 143rd St. in Orland Park sold for $6.7M. The 15K SF Walgreens is on the southeast corner of 143rd Street and Will Cook Road, Orland Park’s two primary thoroughfares. Randy Blankstein and Jimmy Goodman of The Boulder Group represented the seller, a private partnership. The buyer was an individual investor.

Brown Commercial Group negotiated the sale of a 30K SF industrial building and 5 acres at 31w222 West Bartlett Road in suburban Bartlett. Brown’s Jim Pietrarosso represented Foderaro Investment Partnership Corp. in selling the building. The buyer, Superior Overnight Services, was represented by Rick Daly and Todd Hendricks of Darwin Realty, and will expand its business in the new location.

The IT department of The Inland Real Estate Group received Realcomm’s Commercial Real Estate Digital Innovation or “Digie” Award for the Best Use of Automation for the second year in a row. Realcomm’s “Digie” Awards recognize companies, real estate projects, technologies and people that have positively impacted the real estate industry through the use of technology, automation and innovation. Inland won the award for its Robotic Processing Automation capabilities aimed at intelligently automating business processes. Inland partnered with Hexaware Technologies, a provider of IT, BPO and consulting services, to develop the RPA solution.

Multifamily rent growth has slowed nationally, according to RENTCafe’s latest monthly rent report with data compiled from the 260 largest U.S. cities. Prices reached a $1,442 average in May, after going up by 2.5% since the same time last year — the slowest annual increase in 18 months. Chicago rents reached $1,906 this past month, above the national average, but slightly less than April's average rent for the city of $1,914.