Is There Such A Thing As Too Much Demand? The Data Center Sector Is Finding Out

The supply/demand equation in the data center world is one that other real estate sectors can only dream of: endless, insatiable demand. Such demand is good, of course, because there will always be a market for more product.

But bottomless demand is also a serious challenge, according to the speakers at Bisnow's Data Center Conference & Expo Midwest on Tuesday in Hammond, Indiana. Actually, a series of challenges. Developers and operators are struggling to find good sites and to make data centers more efficient, so that there is some hope of keeping up with all that demand, and they have to deal with the same increasing costs and labor shortages that vex other real estate sectors. 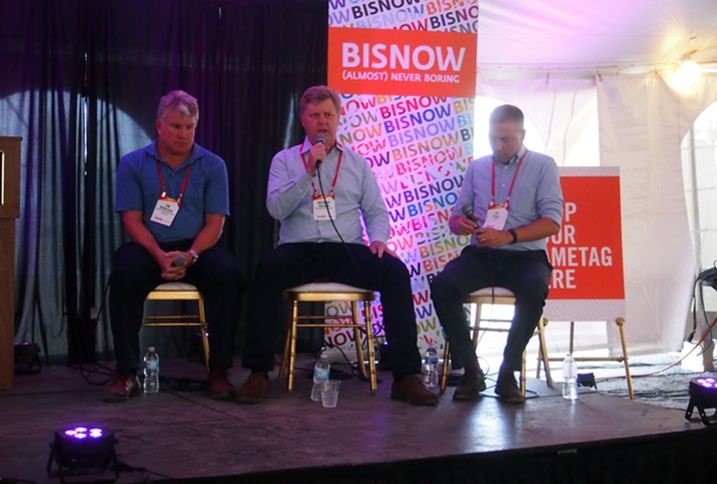 The Chicago area has one of the most robust data center markets in the country, the State of the Data Center Market panelists said. It is the third-largest region for data capacity, and a vigorous competitor for data-using companies, across a wide spectrum of deals. So far, the market has been able to keep up with demand.

Because demand is so strong for data centers, one of the main considerations among major users of data center space is simply where they can find space, Kerrigan said. Also critical: where there is likely to be space to expand in the future, as the cloud, the Internet of Things, autonomous vehicles and other emerging technologies drive even more demand.

Chicago has seen some recent hyperscale deals, Stream Data Centers Executive Vice President Anthony Bolner said, but the market is also able to provide enterprise users the kind of space they need — 1 megawatt to 2 MW. Despite the growth of hyperscale, those smaller deals remain an important part of the data center world.

Element Critical CEO Ken Parent added that Chicago is home to a lot of non-tech companies — such as financial services and healthcare firms — that have high data usage, and they are an important component in demand for space here. 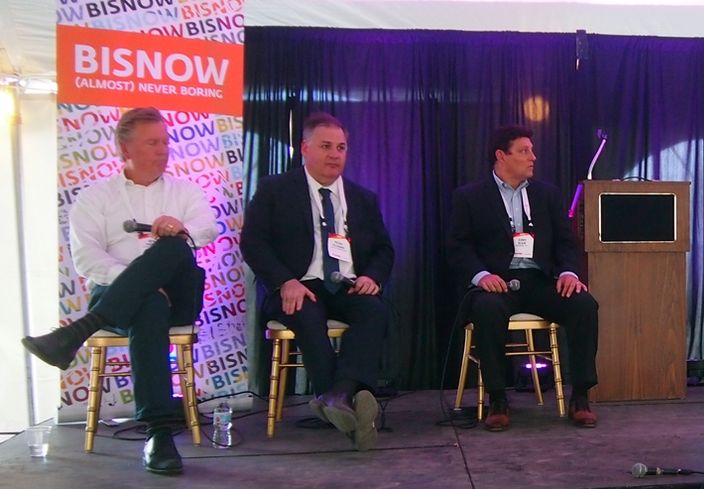 So the Chicago-area market is not only deep — in that there is a lot of demand — but also broad, with demand from a wide spectrum of data users, the State of the Market speakers said. Some customers are moving into data centers for the first time, while simultaneously artificial intelligence companies are requiring massive amounts of space. As a whole, the market needs to satisfy the great variety of users.

Within the Chicago metro market, Downtown is still attractive, but other markets are on the rise. Elk Grove Village and the area surrounding O'Hare in particular has become a prime destination for data center operators, cloud service providers and enterprise users, the speakers agreed. The submarket has the entire package: fiber optic connectivity, reliable power infrastructure and proximity to the rest of the Chicago market.

Farther away, though only about 11 miles from Downtown, the Digital Crossroads development in Hammond — where the event was held, under a tent at the construction site — will be a cost-effective campus, Digital Crossroads CEO Peter Feldman said.

The 10 MW data center will be on a 77-acre site that formerly housed a power plant on the Indiana side of the Indiana-Illinois border. The plant closed in 2012, leaving room for an adaptive reuse project to take advantage of on-site substations, about 950 million gallons of water from Lake Michigan for cooling and 1,728-strand dark fiber to provides connectivity to carrier hotels in Chicago. 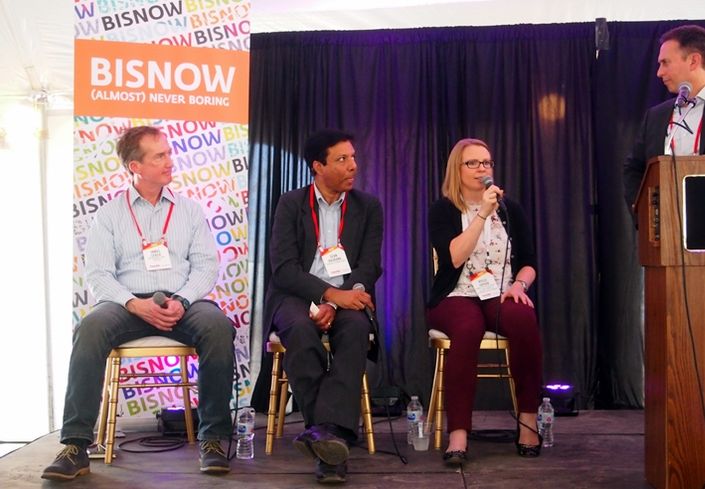 How can markets attract data centers? It is a team effort, the speakers at the Data Center Site Selection panel said.

For one thing, according to RagingWire Data Centers Vice President James Leach, supply is a driver in the data center market more than in other real estate asset classes.

"Once supply exists, it attracts demand," he said.

That is one of Chicago's advantages, but it can also be an advantage for smaller, less expensive markets, provided they have the supply they need to attract customers, Minnesota Department of Employment & Economic Development Manager Kylle Jordan said.

Minnesota isn't in the same league as Chicago, but there are data users who want their data to be local, Jordan said, adding that communities need to be educated about what data center developers want and need in a location. It is not enough simply to have a lot of inexpensive land.

One exception to that was the brief spike in demand caused by cryptocurrency miners early this year, Jordan said. They were looking for data capacity pretty much anywhere — but that demand imploded with the drop in cryptocurrency prices.

Cavern Technologies President Sean Khurana said the growth of the cloud is actually helping the co-location sector of the data center market, a trend against expectations. 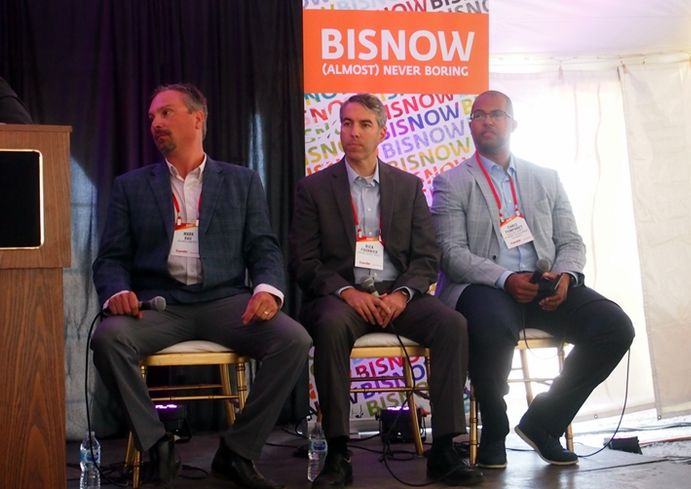 Land, electricity, incentives — these are all important factors in site selection, Digital Realty Trust Director, Enterprise Sales-Midwest Rick Fournier said — but they pale in comparison to fiber. "Getting access to fiber is the most important consideration," he said.

Land is getting expensive in some markets, such as northern Virginia, San Francisco and to some extent Chicago, which encourages data users to look to other places, such as the growing market in greater Atlanta, Douglas County Economic Development Authority Executive Director Chris Pumphrey said.

The impact on a local economy of a strong supply of data centers means more than just success for data center owners and operators, but also growth for the local economy. That is because data center customers also buy equipment — quite a lot of it — and need labor.

"For every dollar spent on leasing space at a data center, companies spend $5 or $6 on servers," Fournier said. 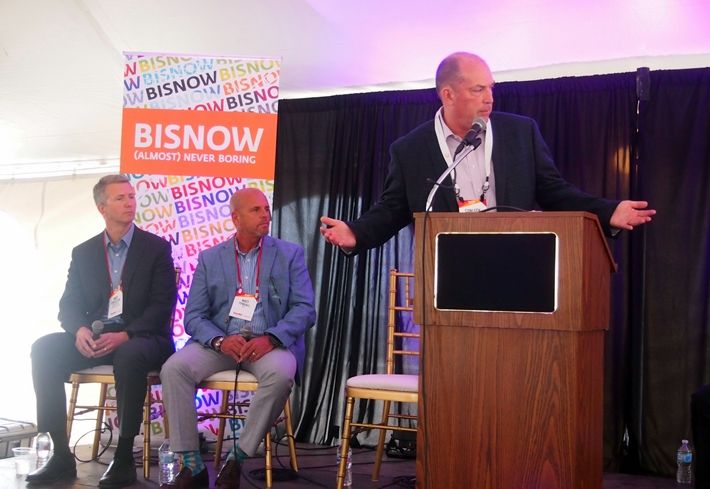 Data center construction is a challenging niche in commercial real estate development, according to the speakers on the Construction and Development panel.

Part of the difficulty is the tension between standardization and flexibility. Standardization has an obvious impact on keeping development costs down, but it can have the effect of limiting a property's flexibility when it comes to serving clients.

"But the growth of hyperscale facilities is changing that," Tyndall said. "Standardization is seen as limiting flexibility, which is increasingly something a facility needs to have. The industry is adapting to that trend."

In keeping up with demand, it is important for data center design to create ever more efficient facilities, CyrusOne Director, Design & Construction Juan Vasquez said. So far that has been the case.

"Data centers are learning to do more with less space," Vasquez said. "The more efficient a facility is, the more it can accommodate customer needs, and the more future-proof it is," he said. "The trend is now denser solutions in spaces." 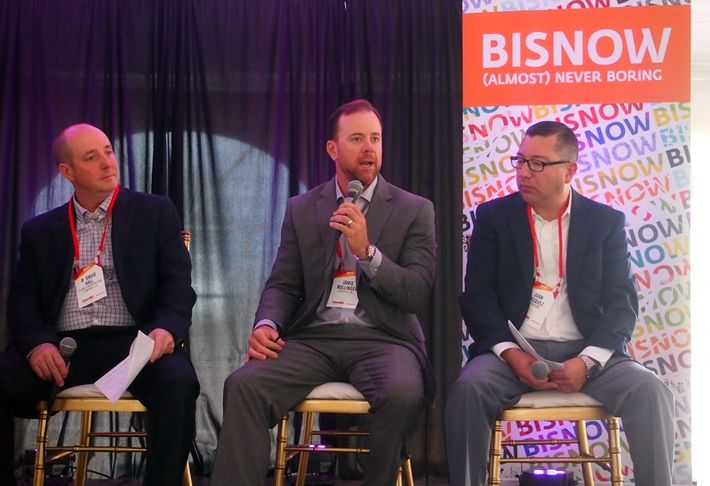 One thing that the Construction & Development panelists agreed on was that the data center industry — like many industries — is facing a critical shortage of labor that has the special skills this kind of construction takes.

Part of the problem, Bollinger said, is that there isn't much awareness of data center construction as a career path. "The workforce needs to be educated about the opportunities," he said.

"You have to find your talent early," Mortenson Construction General Manager Andy Stapleton said. "While they are still in school. Let them know that talented workers can have a solid career in the industry."