Developers Use Art To Draw Attention Of Creative Office Community 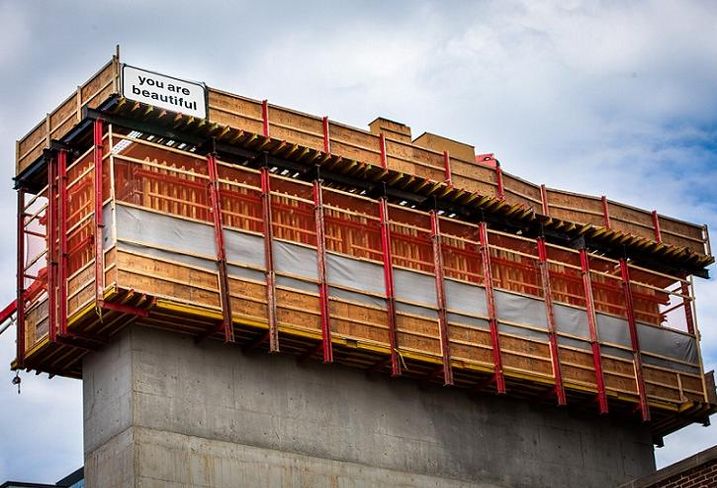 Parkside Realty continues to look for new ways to help its new Fulton East office project make a memorable impression on Chicago’s broker community. In the summer, it used drones trailing banners to spice up the groundbreaking ceremony for the 12-story steel-and-glass office and retail building in Fulton Market.

Now that construction has begun, company officials decided to transform the site at 215 North Peoria St. into an ongoing public art exhibition. Parkside, a joint venture of veteran Chicago developers Bob Wislow and Camille Julmy, installed two 10-foot by 6-foot “You Are Beautiful” banners by popular Chicago-based artist Matthew Hoffman on scaffolding at the site, which will move up along with the building as it rises to its full 167-foot height.

“We’re building in Chicago’s most interesting neighborhood, so we wanted to find a way to make the building distinctive in a productive way, and give Matthew a larger canvas,” Wislow said.

Hoffman created the “You Are Beautiful” emblem in 2002, and millions of stickers with its slogan have now been placed worldwide, but this is his first Fulton Market exhibition, and once Fulton East reaches its full height, will be the highest installation.

Wislow, Parkside’s chairman and CEO, is an art collector, and believes Hoffman’s work will draw attention from companies and groups well-suited for the boutique-style Fulton East, which will have floor plates of just 10K SF. The surrounding neighborhood already hosts regional and world headquarters for companies like Google, McDonald’s and Glassdoor, but their buildings’ massive floor plates aren’t suitable for the smaller creative and service firms that typically flock wherever big corporate players plant roots.

“There are a lot of people that want and need to be near these companies, and Fulton East will be the perfect place for them to brush shoulders with their clients and with potential clients,” Wislow said.

Fulton East will also offer these tenants floor-to-ceiling windows, 9-foot by 27-foot balconies on each floor and an 8K SF landscaped rooftop park.

“I believe the market is set for buildings of this type and size,” Wislow added.

He points to the success of 811 West Fulton Market, a 70K SF building recently built on spec by Shapack Partners, and quickly leased to the furniture company Knoll, BlackEdge Capital and coworking provider The Wing. It was just sold for $50.3M to Boston-based Intercontinental Real Estate, the highest-ever price per SF for a Chicago office building.

Parkside plans to send out Hoffman’s “You Are Beautiful” stickers to the city’s brokers as a reminder that Fulton East will soon debut.

“I can’t tell you it will be 100% leased, but I think it will be significantly leased before it’s open,” Wislow said.