In the style of speed demons like Usain Bolt and Michael Phelps, gold medal office acquirer KBS set a new record in the largest Chicago office sale since, well, they bought here two years ago. 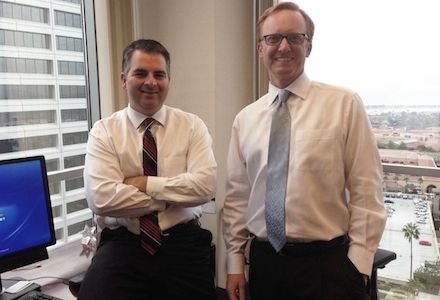 KBS REIT III, an affiliate, paid $425M plus closing costs for 1.5M SF 500 W Madison, in the REIT's largest acquisition ever, and the biggest in Chicago since another KBS affiliate picked up 300 N LaSalle St for $655M in 2010. KBS regional president Ken Robertson (left, with SVP Brett Merz) says the firm was attracted to the interplay of activity on all sides of the asset: top urban housing, a rapidly emerging innovation district, gentrification of the tech and lifestyle-centric Randolph-Fulton submarket, and all adjacent to the CBD. The seller was a venture including GE Asset Management. The company financed the purchase with a $255M five-year loan from Wells Fargo and said it plans to invest about $66.4M in renovations over the next six years, according to SEC filings. (So get ready for some spiffy new toilets.) 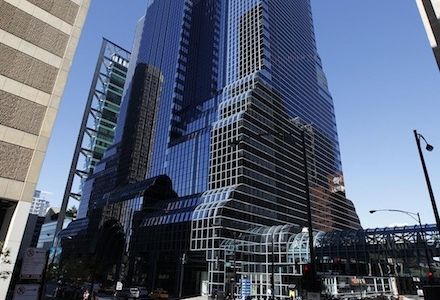 "The views are extraordinary, the amenities fantastic, and it will only get better," Ken says. "We also love the transit-orientation." Located above Ogilvie Transportation Center, the LEED Gold tower is 93% leased with major tenants including Citigroup, W.W. Grainger, and Orbitz Worldwide. The first two levels include almost 64k SF of retail, with 45 stores and restaurants. The weighted-average rental rate over the remaining lease term is $25.34/SF, filings show. Transwestern will be the property's exclusive leasing agent, with the team of EVP Michael Lirtzman and senior associate Courtney Baratz, and property manager. Ken's glad to have closed escrow before Christmas, and is looking forward to time with the kids and some paddle boarding over the holidays.