If Charlotte Is To Become A ‘City of Bikes,’ Will Developers Do Their Part?

It is not always sunny and 68 degrees when Bank of America Senior Vice President of Human Resources Christine Weber gets on her bicycle to commute to work. Sometimes it is humid and July, with frizzy hair in the forecast. Other times, the cold wind seems ready to take her down during her ride into the office, 10 miles from her home. 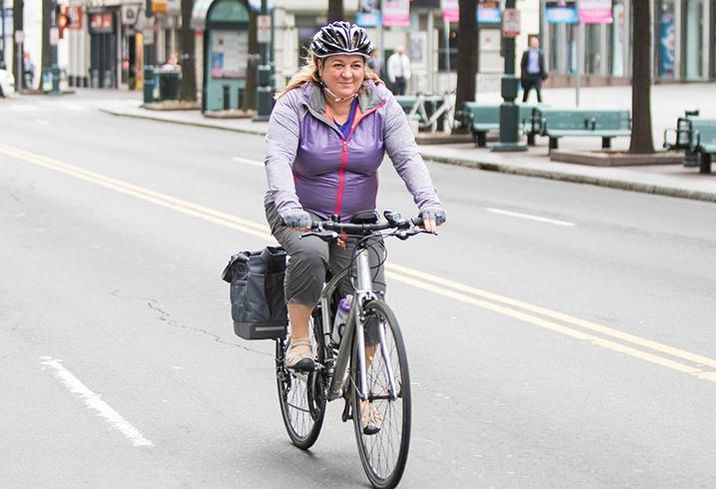 She hops on her bike and rides to work anyway, carrying in her bike panniers quick-dry towels, toiletries and a change of clothes.

Once Uptown, she arrives at 1BAC Building, which has bike cages controlled by employee badges, where Weber can leave her bicycle, helmet and bike shoes. Shower facilities are around the corner. The women’s room at 1BAC includes eight showers, a handicap facility, shampoo, conditioner, hair dryers, flat irons and curling irons.

“If it’s summertime and you rode the whole way from home, you’re not looking your cleanest and shiniest, you can kind of scoot around, go into the locker rooms there and get ready and pretty before you come out and expose yourself to the rest of Charlotte,” Weber said.

Charlotte’s bike commuters know arriving safely at a destination is only part of the challenge; bicycle parking and dealing with sweaty work clothes can be a whole new adventure. As greenways expand and corporations encourage healthier lifestyles, environmentally responsible commercial developers are working with the city of Charlotte to create solutions for bicyclers. But is it enough for those who are actually putting rubber to the road each day, two-wheel style?

A 'City Of Bikes' 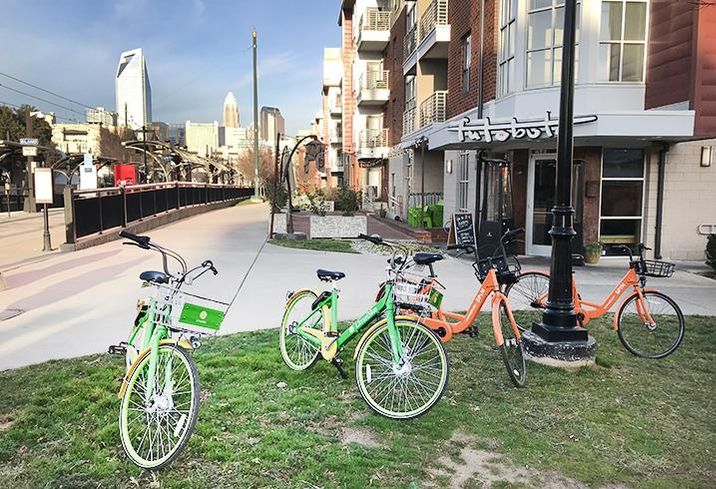 Charlotte is set to become a “city of bikes,” leaders said at a recent Charlotte Center City Partners board of directors meeting. The city has a good foundation for bike sharing: B-cycle, with the help of public funding, launched just before the Democratic National Convention in 2012.

The dockless bike-sharing world shifted in 2017, beginning with Texas-based company V-Bikes, which arrived in Charlotte in August. In the fall, as part of a bike-share pilot program, the city welcomed two dockless bike-share companies, LimeBike and Spin, which plunked 1,000 new bikes onto Queen City streets in one day. Companies Mobike and ofo quickly followed.

The city of Charlotte requires new commercial developments to have short- and long-term bike parking, according to Benjamin Miller, who was the city of Charlotte’s bicycle program coordinator when Bisnow interviewed him. (He has since left to be the airport development coordinator at Rocky Mountain Metropolitan Airport.) For an existing office complex built before the city’s 2005 adoption of bicycle parking requirements, the city provides an inverted-U bike rack for free.

“This ensures that there’s always at least some adequate bike parking. It’s kind of one of those underappreciated things for those who ride — it’s a lot of hassle to show up somewhere and not really have an idea of where you’re supposed to park your bike,” Miller said.

“In a city like Charlotte, we’ve done such a great job with automobile parking,” Miller said. “You almost always know there’s a car spot, but we didn’t do that for biking for a long time, so we’re playing catch-up.”

To address the growing cycling trend, many developers are going beyond the minimum set by the city, purchasing B-cycle stations to place outside of apartment complexes and office buildings. Some are also creating bike-storage and shower facilities. 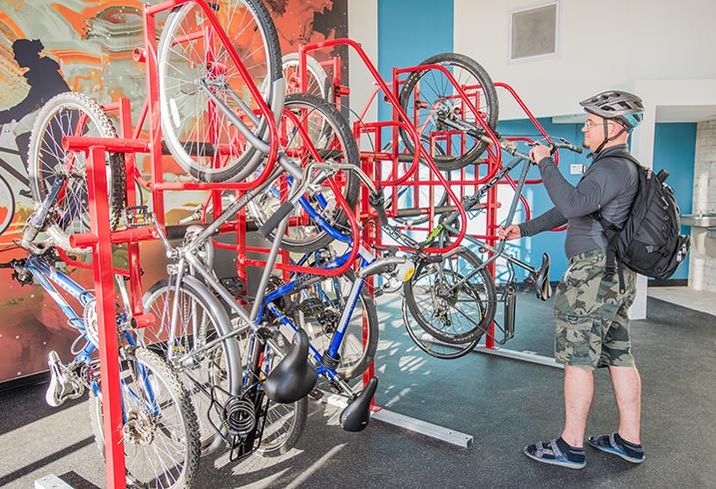 Some developers say the employees, more so than the business owners, are the ones setting the demands for office space amenities. When Grubb Properties and New York Life tasked real estate services company Foundry Commercial to transform and market 525 North Tryon, a 20-year-old LEED-certified office complex, the company addressed bike storage in a big way because tenants demanded it.

“In a lot of ways, buildings have overlooked employees who exercise outside of the building but want lockers and facilities inside of the building,” Foundry Commercial principal and Carolinas Market Leader Charles Jonas said. “Meaning, they have historically provided workout facilities for tenants to run on a treadmill or do a rowing machine or something inside the facility.”

A cutting-edge fitness facility was part of the package for 525 North Tryon, Jonas said, but it was not the only part.

“The beauty of Charlotte is our wide streets, our friendly drivers — at some level — and our temperate climate,” Jonas said. “A lot of our employees are exercising outside of the building itself: walking, jogging, running, biking.”

“We think it’s an unmet aspect of the CBD buildings. We think it’s a growing access piece for employees to get to their offices,” Jonas said. “We view it as a connection piece between our building and the mass transit options offered by the city of Charlotte.”

Grubb Properties Executive Vice President Joe Dye said being bike-friendly is part of a broad focus on sustainability for buildings, office workers and the city itself. 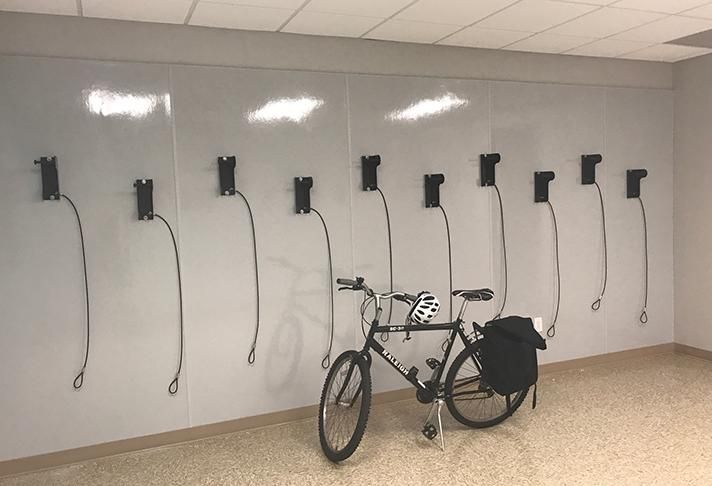 In addition to 525 North Tryon, Grubb Properties is developing Park Charlotte, an office complex set to open in the third quarter, which will span an entire block at Park Road and Mockingbird Lane. Featured within Park Charlotte will be renovated buildings 4601 Park on Park Road and 1515 Montford Park on Mockingbird Lane, with anchor tenants OrthoCarolinas and Pfeiffer University.

Park Charlotte will include a bike storage facility, showers and changing rooms with lockers for both buildings’ use. Grubb will be seeking LEED Silver Certification for 1515 Montford Park. LEED uses a point system to help developers create healthy, highly efficient and cost-saving buildings. Points may be earned for things such as bicycle storage facilities, showers and changing rooms. Having a high level of LEED certification can be a marketing tool.

But Are Developers Doing Enough? 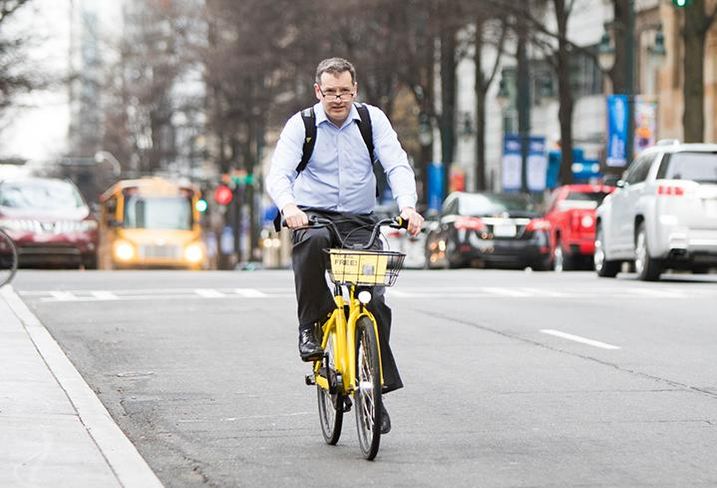 Courtesy of Alex Cason
A bicycle commuter uses a dockless bike from the company ofo in Uptown Charlotte.

Cycling advocate Pam Murray said the bike facilities developers are including are a great start, but more attention is needed. For example, bike racks should be in obvious locations with signage so cyclists do not have to go on scavenger hunts to find them, she said.

Murray, who runs the Charlotte chapter of the nonprofit Bike Benefits and co-founded nonprofit Charlotte SpokesPeople, said developers should work with building managers to make sure that once built, the amenities are useable.

“There are many rules that make it hard for commuters,” she said.

For example, Murray said lockers are generally day lockers. Since nothing can be left in them overnight, a cyclist employee needs to consider how to transport shampoo, deodorant or hairbrushes daily.

“There are not enough hooks to dry towels or sweaty clothes,” Murray said. “Think about the summer: after you ride in, take a shower, change; want to put sweaty clothes on to ride home or take three pairs of underwear?”

The bicycle-friendly facilities could be considered a form of greenwashing: the amenities sound good on paper and certainly help check off a LEED certification box, but if developers are putting showers and racks into under-utilized corners, and the process is not user-friendly, is it all a form of marketing more than something useful?

“Facilities, infrastructure and education need to all go hand-in-hand,” Murray said. “I don’t think the greenwashing is intentional, but the bottom line is the same.” 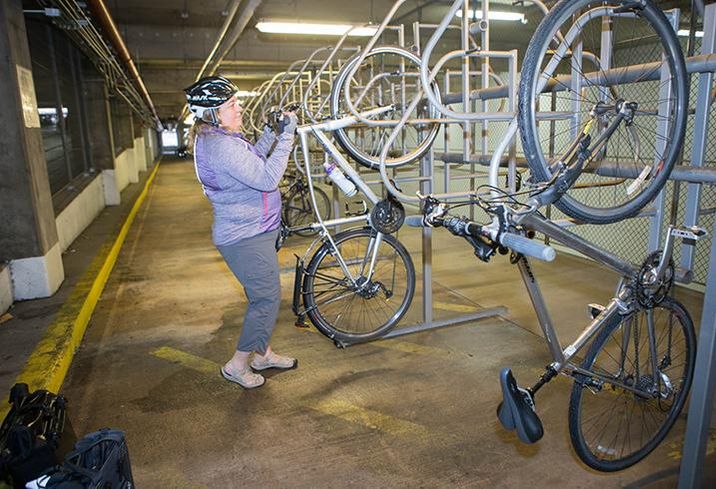 Whether designed as a marketing tool or not, those that use the bike facilities can find joy.

“There’s something about it, when you’re rolling into Uptown on your bike, you’re all energized, it’s a stress reliever before the day. You kind of have a little bit of a swagger in your step. It’s a boost,” Weber said.

When Weber’s day is done at Bank of America, the main challenge she finds with her commute home is not related to any facility or infrastructure hiccups: of all things, it is the weather.

“Late afternoon rain is a constant challenge. You leave in the morning, it’s a beautiful day, then all of a sudden there’s torrential storms in the afternoon. Most people look at temperature. I’m looking at wind, I’m looking at humidity, I’m looking at precipitation likelihood.”

Subpar conditions, whether by Mother Nature or developers, do not slow down most bike commuters.

“Once I’m out in it, I don’t mind riding in the rain. I’ve got the right gear. I have the luxury of alternative choices — I can always take the train or drive, but I prefer to ride my bike,” Weber said.