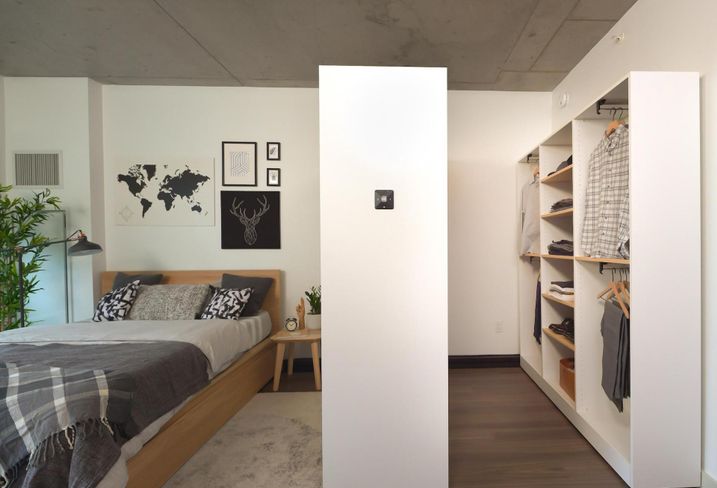 Courtesy of Ori
Ori's Pocket Closet can expand out as a walk-in closet (pictured) or push together and serve as an entertainment console when not in use.

A robotic interiors firm founded at MIT has attracted new investors and named a former executive from WeWork’s residential arm as its new president.

Boston-based Ori raised $20M in Series B funding from an investor group that includes Sidewalk Labs, Ingka Group and Geolo Capital, the company announced Thursday. The new investors join current backer Khosha Ventures. The funding will enable Ori to move beyond only creating products to partnering with architects and developers on flexible and affordable urban housing.

“It is so energizing for us to have the opportunity to partner and collaborate with investors who similarly are rethinking how urban centers should be built and who are working at the building, neighborhood and city scale,” Ori founder and CEO Hasier Larrea said in a prepared statement. “From our perspective, Sidewalk Labs, Ingka Group, Geolo Capital and Khosla Ventures [are] the perfect team to supercharge our execution toward this vision.”

To help drive the expansion, Ori also hired Edwin Hendriksen as its new president. Hendriksen was most recently a senior vice president and head of WeLive, The We Company’s slow-growing co-living concept. He was previously senior vice president of investment and development at Dutch microhotel brand CitizenM and led the North American rollout for the company, according to his LinkedIn page.

“I couldn’t be more enthusiastic about joining Ori, and convinced that the concept of dynamic, responsive space is an absolute game-changer,” Hendriksen said in a prepared statement. "For developers and real estate owners, Ori’s technology and solutions create a real competitive advantage. But more importantly, being able to transform and configure your space in a frictionless and elegant way not only means an enhanced experience for residents living in compact urban housing, but it also opens a new pathway to affordability and access to urban communities."

Ori announced earlier this summer its products will be sold at Ikea stores next year, beginning at locations in Hong Kong and Japan. The company’s current products, including the Studio Suite, the Pocket Closet and the Cloud Bed, change a room's space utilization through voice command or at the touch of a button.