No Room In Your Micro-Apartment? No Worries, Get Robot Furniture 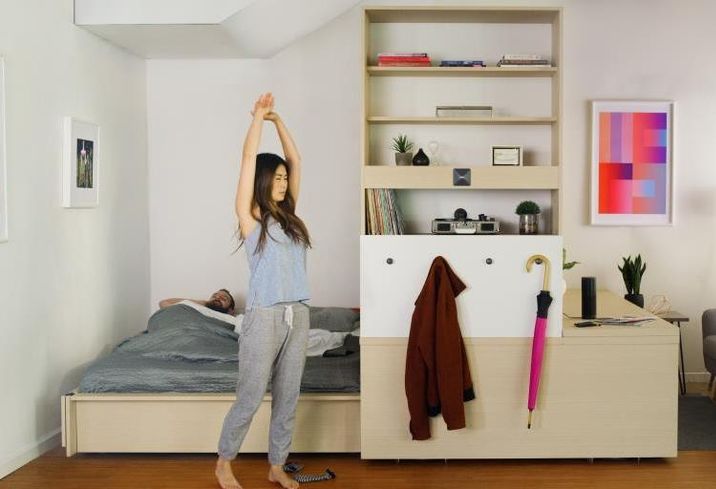 Ori recently rolled out the Ori Pocket Closet, which creates an on-demand walk-in closet in any room, and the Ori Cloud Bed, a bed that lowers from the ceiling or lifts to the ceiling to reveal a sofa.

The aim of both new products is to make the most of a small amount of dwelling space by making furniture easy to move and stow out of the way, using robotics.

The Pocket Closet is powered by robotics and rests on a set of powered wheels that drive the closet back and forth, guided by a metal track set against the wall.

The device comes ready to assemble with furniture panels, shelves and hanging rail, and knows when it hits something unexpected, like a person or a piece of furniture. In that case, it stops automatically.

The Ori Cloud Bed can be lowered and raised into an integrated dropped ceiling, revealing a sofa and enabling a multipurpose use of space.

As with the other pieces of Ori furniture, the Cloud Bed can be controlled using voice activation with Google Assistant or Amazon Alexa, via the Ori app, or with the Ori Square control panel.

These two new products join the Ori Studio Suite, introduced by the company in 2017. It is essentially a large piece of furniture that can transform into a bedroom, a home office or an entertainment area at the click of a button.

The technology was originally developed by Larrea and his team at the Massachusetts Institute of Technology's Media Lab. In 2015, he collaborated with Swiss designer Yves Béhar to launch the company. (Larrea talks about dwelling space in this TEDx Cambridge Talk.)

Renters are now choosing smaller units with bigger rents, according to a recent study by RentCafé using data by Yardi Matrix. The average size of an apartment built in 2018 in the U.S. was 941 SF — 5% smaller than an average apartment built a decade earlier.