Downtown Crossing, one of Boston’s oldest neighborhoods, had the life drained out of it for decades. Soon, the interior fit up will start on the historic former Filene’s department store signaling the district’s stunning revival. (Who doesn't like a nice comeback story?) 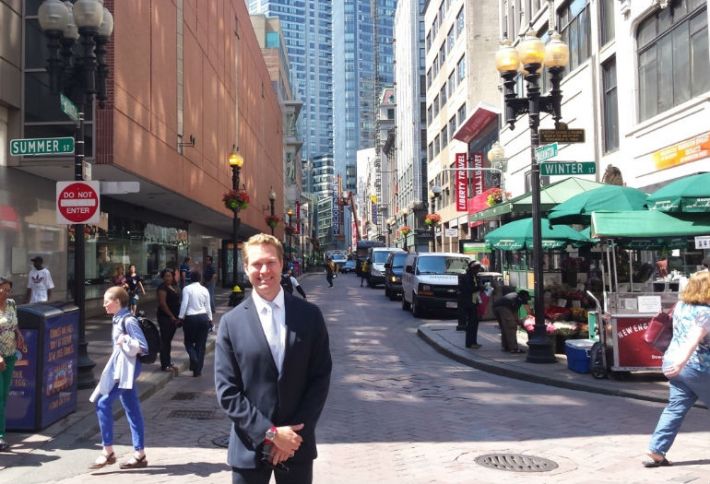 For decades, city residents fled to the suburbs, trailed by key Downtown Crossing businesses, especially retailers. Even 10 years ago, this neighborhood on the edge of the Financial District was struggling; dark and quiet after 5 o’clock, says Boston Redevelopment Authority senior planner Jonathan Greeley. It had tourist attractions like the Old South Meeting House, but was burdened by the perception that it was fatally uncool. (Think "cool" doesn't matter after high school? Think again.) Since then, $4B in private real estate investment, a push from the City, nearly 2,000 new housing units being developed in walking distance, new tech company office tenants and retail has turned Downtown Crossing into a comeback phenomenon. 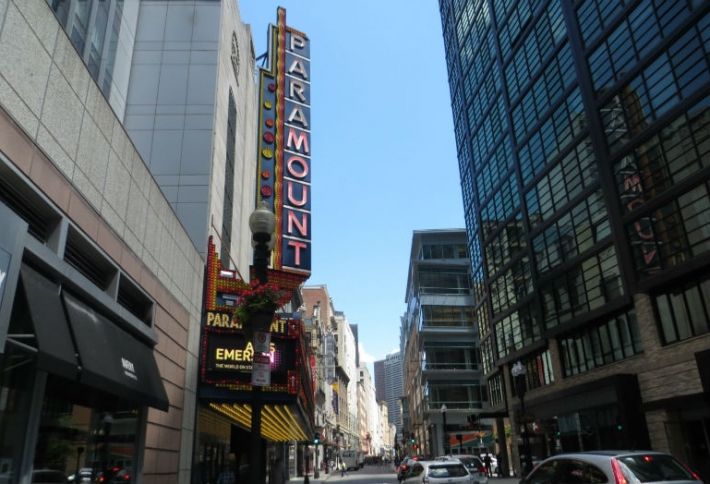 Early movers in the transformation were institutions like Emerson College and Suffolk University. They restored old theaters including the Emerson Paramount (above), built academic space, dorms and created additional demand for retail, Jonathan tells us. With 200,000 people a day walking through its main intersection, Washington and Summer Streets, the ready-made retail market is being rejuvenated by an infusion of youthful energy. (It's also a really impolite place to leave your chewed gum on the ground.) A Business Improvement District, the city’s first and only, has helped with lobbying, maintenance, security, and community events. 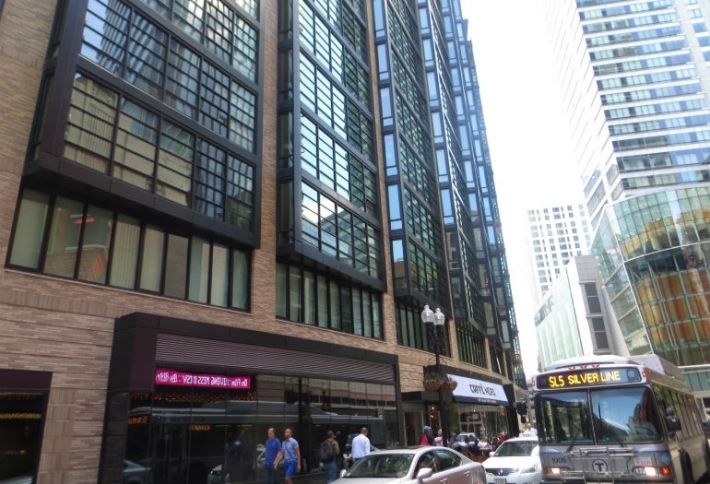 For nearly 200 years, Downtown Crossing had few residents. (And, if we're being technical, it had even fewer residents the 5,000 years before that.) But New York-based Millennium Partner’s’ $220M Millennium Place mixed-use residential project that opened Q4 last year tested how housing would fare in the heart of this commercial neighborhood. All of its 256 condos sold by February priced from $550k to $3.5M. As one of the first Boston condo developments to be completed since the recession, it showed that buyers would put down stakes in the CBD, permanently changing the character of the historic neighborhood. 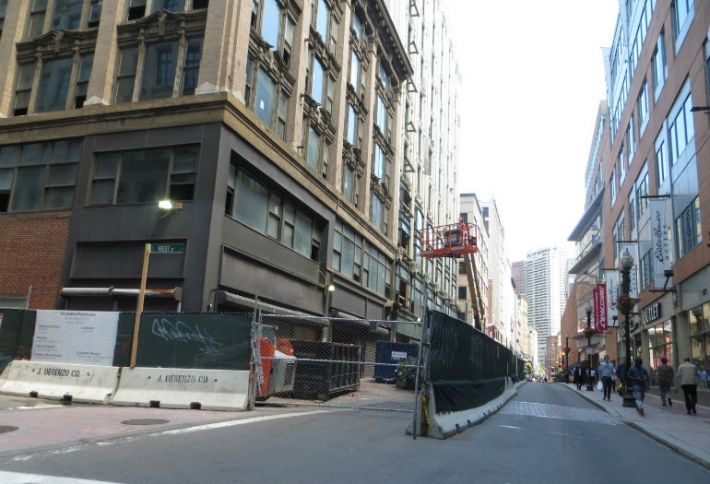 Oxford Capital’s $60M redevelopment of the old office at 59 Temple Place into a 240-key Godfrey Hotel (above)—downtown’s first since the recession—will bring in more foot traffic. That’s one reason why Jonathan says “any new hotel is a good hotel.” The City is also “thrilled” to see a developer investing in an existing, historic building. Oxford CEO John Rutledge paid $23M for the office relic two years ago saying he believed in the transformation of Downtown Crossing. He nailed that and spotted a strengthening hotel market. In Q1, Downtown led the city in RevPAR growth at 10%, PKF Hospitality Consulting recently reported.

More than any other project, Millennium Partners’ 1.4M SF, $689M Millennium Tower complex, which includes the former Filene’s building (above), dramatically reflects the resurgent economy. In '08, Vornado and Gale International abandoned their project on the site, blaming the failing capital markets. But the cavernous hole they left on Washington Street—Downtown Crossing’s main drag— was like a finger in the eye for the City.Arnold Worldwide-Havas Media’s agreement to be the Phase One anchor elevated the cache of the Downtown Crossing and Financial District office markets. Later this summer, when Arnold begins the interior construction for its 2014 move, the revival of Downtown Crossing will be a fait accompli. 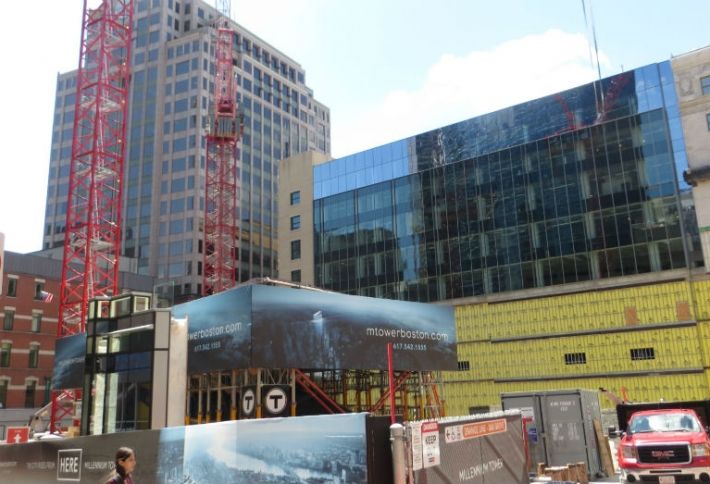 When construction is completed in 2016, the 625-foot Millennium Tower will be Boston’s tallest residential high-rise. Truly mixed-use, it will have 442 residences—condos and apartments—156k SF of retail and 200k SF of office. Leasing prospects for this project and for downtown in general are bright. The downtown tower market is at or below equilibrium (10% vacancy), according to Colliers research. But rent for low-rise office space is still a value versus the Seaport or East Cambridge. 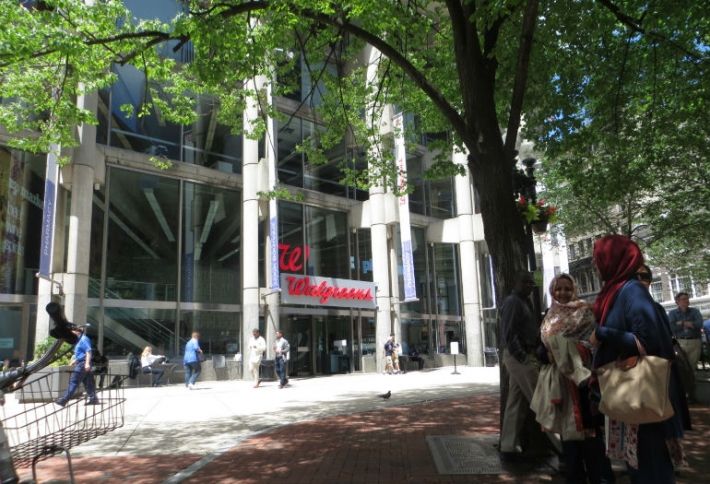 Walgreen’s move into 24k SF of multi-story retail space at the corner of Washington and School Streets was the retailer’s third urban super store in the country. For Downtown Crossing, it’s proven to be an amenity that’s good for the entire neighborhood—not just officer users—with its grocery, liquor store, nail salon, sushi bar, and pharmacy. Its opening last year was a big step in Downtown Crossing’s rebirth into an 18-hour neighborhood, Jonathan says. 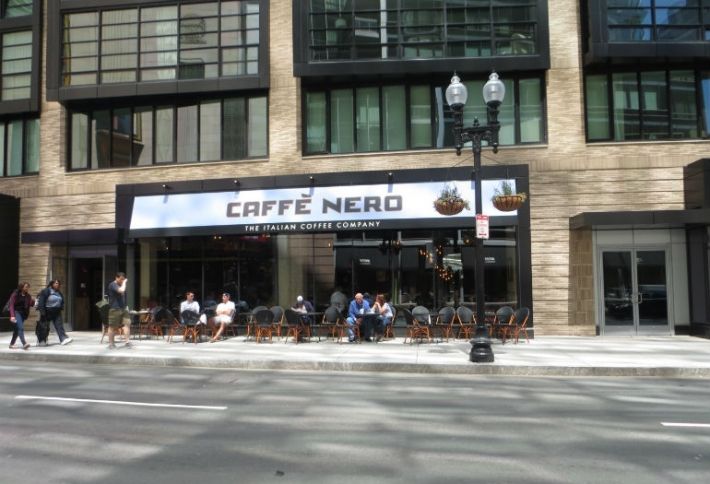 For their first stores in the US, popular Dublin-based clothier Primark and London-based espresso aficionado Caffe Nero, chose Downtown Crossing; the former in Millennium Tower, the latter just opened in Millennium Place (above). The Tower has also signed up Roche Brothers for a total 35k SF, which will open a long-awaited downtown supermarket  in ‘15. No place is a real neighborhood without a grocer. (Or at least not a neighborhood where anyone cooks for themselves.)