The ribbon-cutting for Suffolk’s Boston headquarters expansion was in the same innovative spirit as the new technologies the company is implementing on its construction projects. 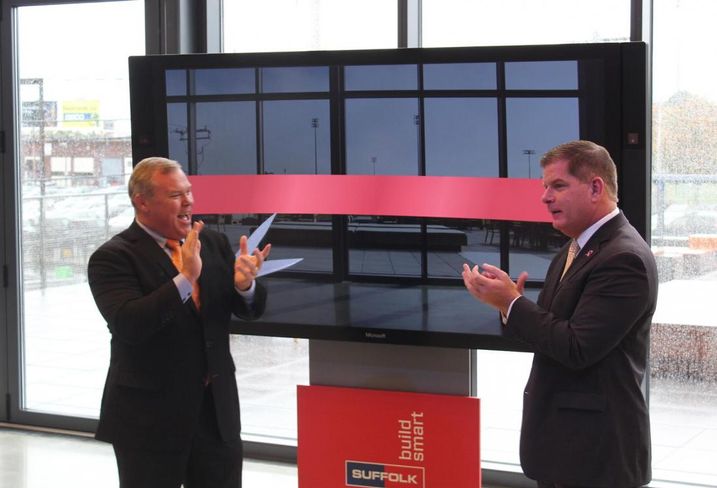 There was not an actual ribbon at the late October ceremony. Instead, the company christened the addition with a digital ribbon display that cut after getting “charged” from cheers from the audience. The construction company’s chairman and CEO, John Fish, Executive Vice President and Chief Innovation Officer Chris Mayer and Suffolk Northeast President and General Manager Angus Leary attended, as did local dignitaries like Boston Mayor Martin Walsh and state Sen. Linda Dorcena Forry.

The 38K SF, three-story addition includes a large auditorium, a new employee cafeteria, expanded fitness facilities and an outdoor terrace. The new space was designed by Elkus Manfredi Architects, and the next phase of the headquarters refresh includes renovating the interior of Suffolk’s original Roxbury building. The expanded area will also feature the launch of Smart Lab, the company’s collaborative workspace that will test and scale new technologies. 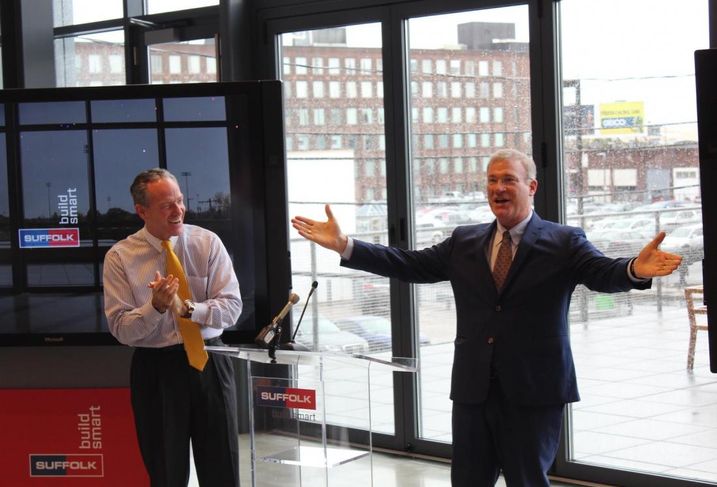 The company debuted its Smart Lab at its New York office earlier this year and plans to expand the technology into its offices in San Francisco, Los Angeles, Miami and Tampa.

Suffolk previously announced plans in 2013 to move its headquarters out of Roxbury to the Marine Industrial Park in the Seaport. It ditched those plans two years later and doubled down on its home neighborhood and has been seen as a leading corporate voice in raising funds for services in troubled parts of the area. Fish said the ribbon-cutting was just as much a celebration of the new space as it was to show its new corporate value of caring.

“Roxbury is and, I’m proud to say, always will be our home,” Fish said. “I’m proud of the role Suffolk will play in shaping its future.”