Housing production costs in Boston have gotten so high that homeownership is out of the equation for many of the city’s residents. Moving the needle is going to take far more than cheaper building materials and existing affordability programs. 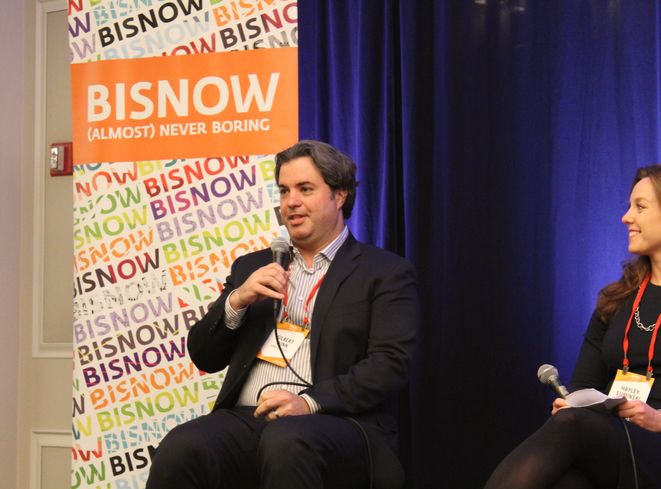 WinnCompanies is a leading provider of affordable housing nationwide, and the company’s CEO, Gilbert Winn, said it now costs an average of $500K to produce a residential unit in a Boston multifamily project.

Taking an industry standard 6% return on that cost, Winn said it would take a monthly rent around $3,500 just to return the minimum level of financing to build that unit. Boston’s median income is about $107K per year. A general financial rule of thumb is to spend no more than 30% of one’s income on housing costs, which means new market-rate housing in Boston is out of reach for most of its residents.

“It’s a long way of saying the minimum level of income you need is double what the median is on every new unit built in Boston without a subsidy,” Winn said at Bisnow’s Multifamily Annual Conference New England last week. “So when you talk about middle and workforce housing, we have a bit of an issue.”

Boston’s soaring construction costs are well-documented. The Hamilton Co. Chairman Emeritus Harold Brown told Bisnow in March he watched as the cost to develop a single Boston condo rose from $20K in 1954 to $450K earlier this year. Preservation of Affordable Housing Managing Director Rodger Brown leads projects in Boston as well as other markets like Washington, D.C., and Maryland. His organization is pursuing similar-sized housing projects in Boston and D.C., and he said the Boston development’s cost will be a third higher. 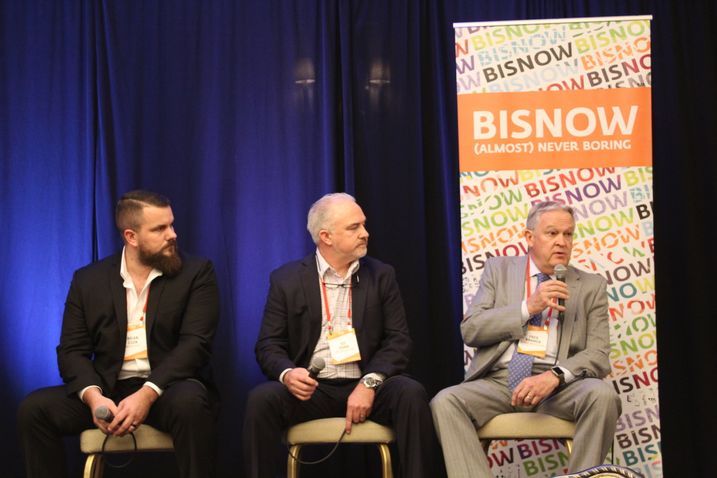 “From where we sit, one of the biggest challenges in developing in Greater Boston is construction costs, especially inside the Route 128 belt,” he added.

Greater Boston construction costs average $230/SF, rising 5% annually for the last seven years, according to KeyBank Vice President Hayley Suminksi. While construction costs have increased sharply, rents have not kept pace — to say nothing of chronically stagnant wages — pushing developers and other players in commercial real estate to look elsewhere to bridge financial gaps in penciling a project out.

Virtual and augmented reality systems help streamline the early design and construction. Modular building is in its infancy, and while developers are still ironing out how to improve the quality and availability of it, Arrowstreet Senior Associate Brian Cook said panelized construction helped speed up the construction of a Hyatt Centric hotel in Post Office Square. 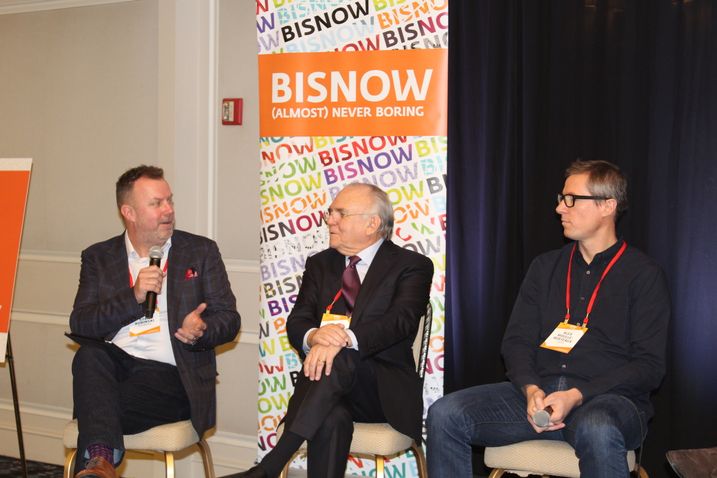 Arrowstreet worked with Consigli Construction on the project, which entailed using 12-by-40-foot panels that included some framing and electrical lines built in and were already cut with windows. The pieces fit together and enabled the team to finish the entire exterior of the 12-story building in three weeks.

“The amount of money and schedule time it saved didn’t pencil out on paper, but we found it as we were going through the construction process,” Cook said.

While most panelists at the BMAC event, like Mount Vernon Co. Chairman and founder Bruce Percelay, said modular building as a widespread multifamily construction practice was still years away, they also liked how increasing production could help Massachusetts tackle high costs and be a boon to the state’s economy.

Establishing modular fabrication plants in Massachusetts could help revive some fallen industrial towns while also making it easier for local firms to access the frames instead of current logistical challenges like trucking parts down from modular plants in Canada, which Stantec Vice President Fred Kramer said his company currently does. 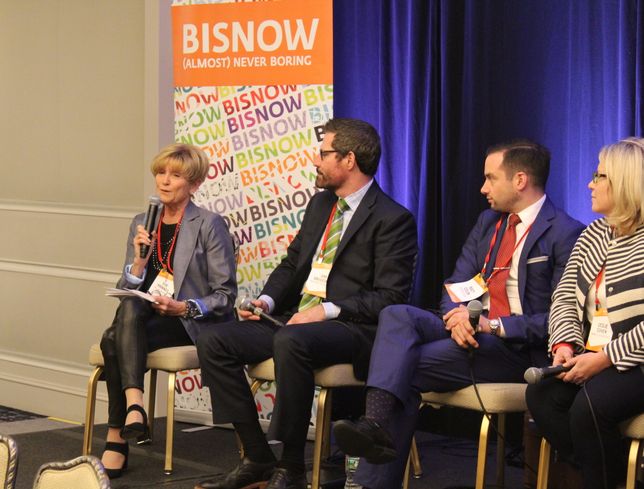 “Some of that intersection with economic development is fascinating to me, and I think we’ll see it come to fruition,” he added.

Finding ways to cut costs with materials are only one part of the equation, and most BMAC panelists said more ambitious measures from all levels of government are needed to tackle the housing crisis, especially workforce housing projects that don’t receive the kind of federal subsidies lower-income projects get.

WinnCompanies is redeveloping the 27-acre Mary Ellen McCormack public housing complex in South Boston as part of a $1.6B plan to transform the 1,016-unit project into a 3,139-unit development for all income levels. That endeavor is part of a larger Boston Housing Authority initiative to partner with private developers to update older facilities in exchange for the opportunity to build market-rate units on the remaining land. Corcoran Jennison Associates is pursuing a similar project at a Bunker Hill housing project to be dubbed One Charlestown. 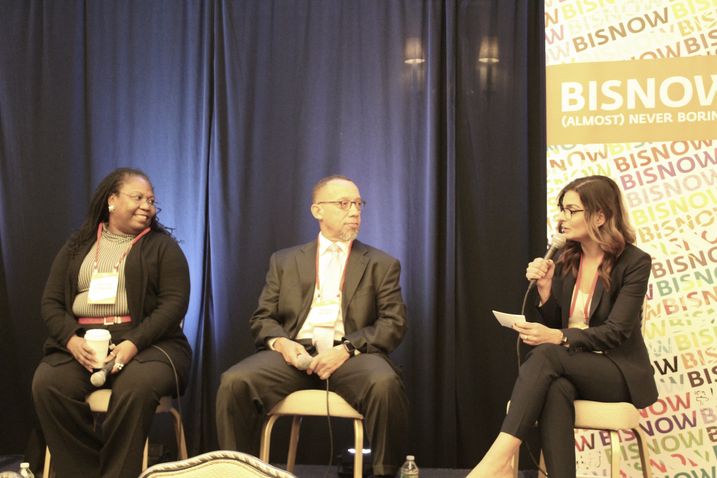 MassHousing, a quasi-government agency is looking to bridge the financing gap on middle-income housing that isn't eligible for federal funds like some public housing projects. The organization created a $100M program for workforce housing where the organization funded middle-income units in developments. It committed $80M of those funds in two years, MassHousing Executive Director Chrystal Kornegay said.

While that may have shown demand for middle-income housing production is there, Kornegay is hesitant to change existing inclusionary zoning policies. Boston’s market-rate rents may cause people making even $80K a year to be rent-burdened today, but she thinks macroeconomics will eventually help bridge some of the financing gap.

“There will be some kind of market-rate correction in a rising interest rate environment, and I think there will come a time when things aren’t as expensive as they are now,” she said. “I’m a little hesitant to get all the way into let’s create subsidy programs for those at 100% to 110% of AMI because, once you get in, you can’t get out.”