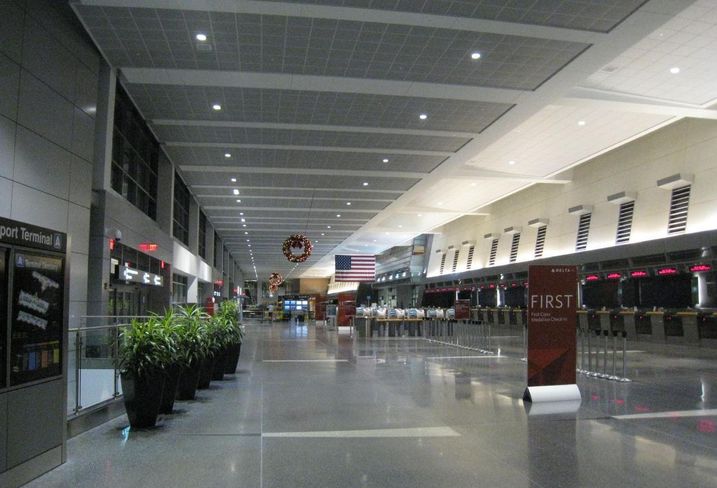 Flickr/Alan Miles
The ticketing hall at Terminal A, Delta's hub in Boston

Fourteen years, a bankruptcy proceeding and a merger considered to be the industry’s most successful has made a world of difference for Delta Air Lines and its Terminal A home at Boston Logan International Airport.

The Atlanta-based airline announced in June it had upgraded Boston from a focus city to a hub, which usually sees connecting air traffic along with flights that depend on people using the airport as an origin or final destination. The expansion was made possible after ongoing construction and reconfiguration at Logan resulted in an airline shuffle.

After merging with U.S. Airways, the combined American Airlines now operates from a renovated stretch of Terminal B. The merged carrier dropped American’s original Terminal B gates on the other side of the facility, which is currently being renovated and expanded for Southwest Airlines.

Southwest will move to the new gates later this summer, the Boston Globe reports, giving Delta control of the 21-gate Terminal A. That was the original plan when the $500M facility opened in 2005, but the airline filed for bankruptcy later that year and eventually focused more on its merger with Northwest Airlines over growing its Boston base.

But Boston’s economy has lured Delta back. Low unemployment, high incomes and a demand for air service is driving the carrier to boost service here along with newly announced focus cities in Nashville, Raleigh and Austin.

Boston revenues are up 25% from last year, the highest in Delta’s system, Delta President Glen Hauenstein said on an earnings call earlier this month.

Further growth is expected, and fast. The carrier operates 140 daily flights and intends to hit 200 within the next 18 to 24 months, relying on its own metal as well as international partners like KLM and Korean Air, which started flights between Boston and Seoul this year.

The carrier is competing with Logan’s largest carrier, JetBlue, for Boston travelers. The discount carrier also has a target for 200 daily flights and is expected to hit the 175-flight mark later this year. Massport is currently at work on a connector between Terminals B and C that will optimize that air carrier’s operation, which is focused primarily on Terminal C and a few gates in Terminal E.