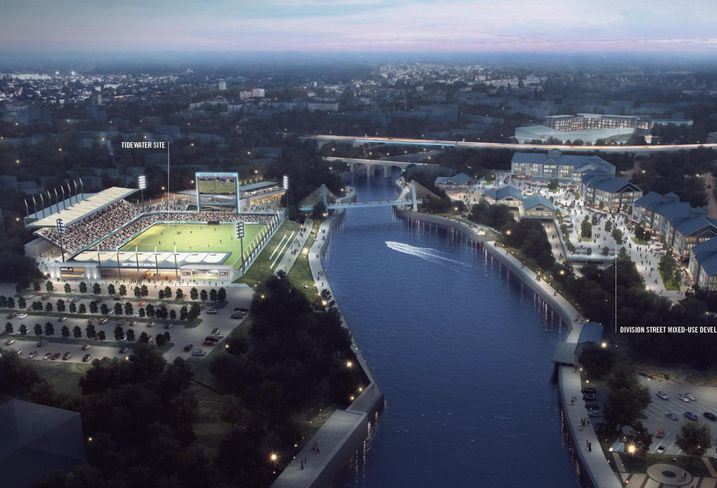 Pawtucket, Rhode Island, may not be completely done with professional sports.

The ownership group behind the Boston Red Sox announced in late summer 2018 that its Triple-A affiliate, the Pawtucket Red Sox, would move to Worcester, Massachusetts, in 2021. While Pawtucket and Rhode Island leaders were surprised by the breakup last year, the city has plans in place for a rebound.

Pawtucket and Rhode Island officials revealed Monday plans for Tidewater Landing, a $400M opportunity zone proposal along the Seekonk River that includes a 7,500-seat stadium that would house a team in the United Soccer League — a tier below Major League Soccer — a year after the PawSox become the WooSox.

The city of Pawtucket chose developer Fortuitous Partners after a request for proposals process for a private partner to revitalize the city’s waterfront.

"This economic development project will establish a professional soccer team from a leading national league here in Rhode Island, revitalize the waterfront and downtown and create more than 3,500 jobs,” Rhode Island Gov. Gina Raimondo said in a statement. “Most importantly, it will transform this area into a vibrant hub of activity like we haven’t seen in decades."

Along with the soccer stadium, Tidewater Landing is expected to include 200K SF of office, 100K SF of retail, a 200-room hotel and an indoor sports event center. The project would be connected by a pedestrian bridge across the Seekonk River and include riverwalks on both sides.

The investment, which city and state leaders say is the largest in Pawtucket history, could add $130M annually to Rhode Island’s economy, according to the leadership group. The project, situated in an opportunity zone, is also expected to generate 2,500 construction jobs and 1,200 permanent jobs once completed.

“This is an opportunity of a lifetime for the city of Pawtucket, the Blackstone Valley and the state of Rhode Island,” Pawtucket Mayor Donald Grebien said in a statement. “This $400M investment in one of Pawtucket’s opportunity zones will create jobs and will be a transformative economic development at the gateway into our state.”

Fortuitous will look to raise funds through the opportunity zone tax incentive program — which allows investors to place their capital gains in a development in an opportunity zone to defer and reduce their tax bill — and a Pawtucket tax increment financing tool passed earlier this year.

“Tidewater Landing is a phenomenal opportunity for the city and region, and we are incredibly excited to be working with the state of Rhode Island and the city of Pawtucket to make it a reality,” said Fortuitous Partners founder and partner Brett Johnson, who is also co-chairman of the Phoenix Rising Football Club in Arizona.