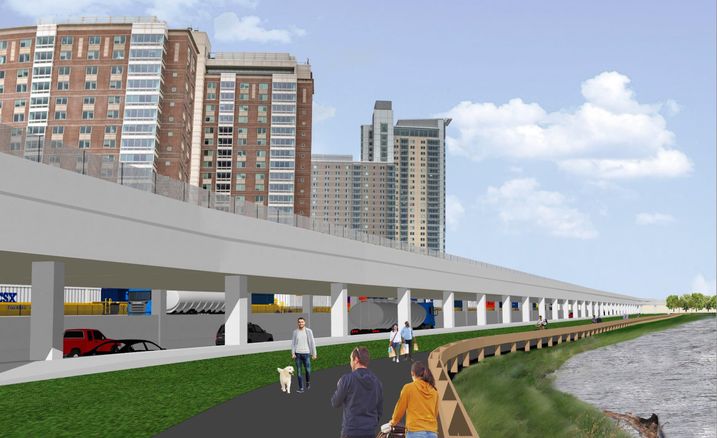 Urban planners’ fears were partially eased Thursday when the Massachusetts Department of Transportation announced a final design for the Massachusetts Turnpike realignment through Allston will better connect a large swath of developable land with the Charles River.

Years of debate among MassDOT, neighborhood groups and urban activists were addressed last week when the state transportation agency announced a $1.1B plan to replace an elevated stretch of the Mass. Pike with a ground-level highway.

The move had been pushed by urban planning organizations like A Better City as a way to improve the urban landscape and make the area a better western gateway to Boston, similar to how the Big Dig drastically altered the public spaces along the city’s waterfront.

The final design will still include a viaduct, albeit at a smaller scale. Soldiers Field Road would be elevated over a portion of the at-grade Mass. Pike, but the new viaduct would be smaller than the existing one, due to Soldiers Field Road being four lanes compared to the current eight-lane elevated highway. The viaduct swap would also add 20 feet of width to that stretch of Charles River parkland and enable more pedestrian bridges to connect the Boston University campus to the river, the Boston Globe reports.

“It strikes the best balance between all the different transportation objectives,” MassDOT Secretary Stephanie Pollack told the Globe. “Moving the state highway down to grade, that was very important to a lot of stakeholders. And while there is still a viaduct to carry a portion of Soldiers Field Road, it will be a less intrusive viaduct.”

The project, which will also unlock hundreds of acres of Harvard University-owned land many expect to become the city’s next hub for innovation, is several years from achieving the goals laid out by the state and urban planners. MassDOT is still figuring out how to finance the project, and officials are still weighing what sections of highway and transit lines to close down during construction.

Pollack indicated drivers likely won’t feel any impact from the development until 2021. She also told the Globe there is a chance West Station, a transit hub expected to be partially funded by a $58M Harvard pledge, could open before the much-chided 2040 opening date MassDOT previously announced.