A $100M aerial gondola through the Seaport may not be as absurd as critics say. 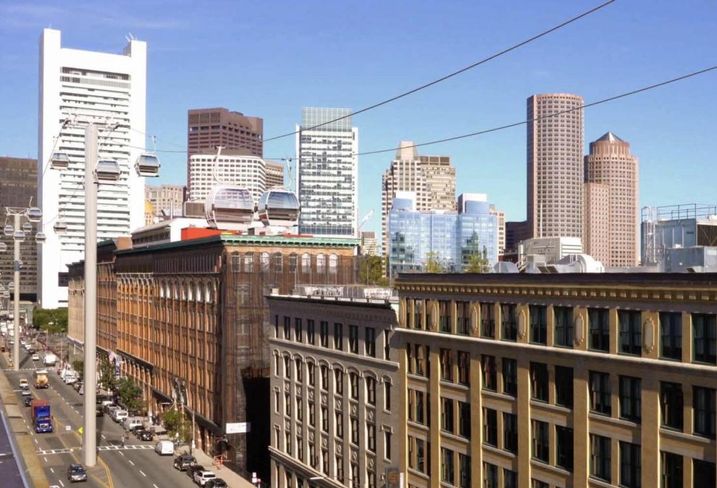 Millennium Partners and Cargo Ventures are pushing a roughly 1-mile, three-station gondola network between South Station and the eastern edge of the Seaport, where the two entities are pursuing upward of 1.8M SF of development. The elevated, privately funded system is billed as an innovative solution to the neighborhood’s congestion complaints, but critics say better solutions would come at ground level.

“We know in the Northeast how our traditional transit modes deal in inclement weather: They don’t do well in it,” Toronto-based Creative Urban Projects Founding President Steven Dale said. “A gondola is essentially a ski lift. It is designed for harsh weather climates.”

Tuesday’s nor’easter was the third to hit the Boston area in less than two weeks, and it teed up fresh criticism on social media for the transportation mode that would dangle as high as 130 feet above Summer Street, according to a Millennium presentation to the city acquired via a public records request.

While those opposed to the gondola proposal cite its unreliability in Boston’s harsh winter weather and waterfront winds, gondolas with advanced technology can comfortably operate in winds as high as 56 miles per hour. 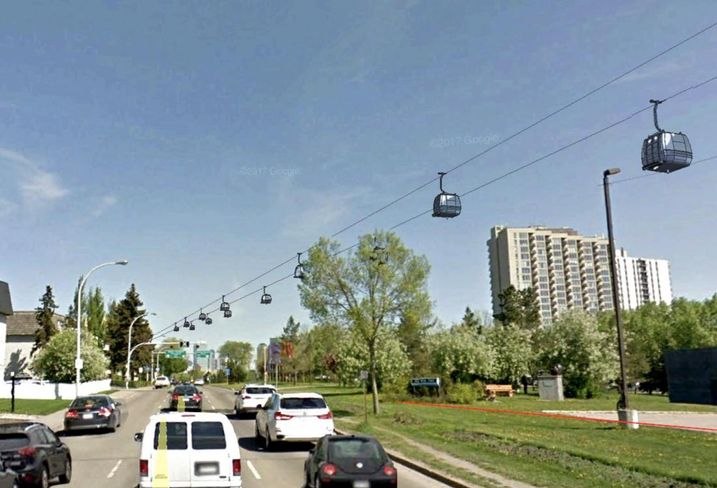 Poliquin, along with her husband, Gary, entered an idea for a nearly 2-mile gondola system in the Edmonton Project, a crowdsourcing competition that sought ideas for a permanent attraction in the Canadian city. The Poliquins proposed a three-station system that could transport up to 10,000 people an hour in a city expected to grow by 40% over the next 20 years. While the competition may have sought an attraction, Poliquin emphasizes the transit practicality behind the idea she pitched with her husband.

“When some folks think of gondolas, they think of a ski resort,” she said. “It’s hard to wrap your mind around the idea it can be used for transit, but it is around the world.”

Coming Back Down To Earth

Not everyone is convinced Boston’s gondola is the best option to fix the Seaport’s congestion. Some developers told Bisnow signal adjustments at previously congested intersections have reduced traffic at interstate ramps in the neighborhood compared to ones in Back Bay and the Financial District. But one transit advocate said that is not enough for the future.

“The Seaport is a mobility mess,” former Massachusetts Secretary of Transportation Jim Aloisi said. “It needs integrated public transportation. The Silver Line is at or over capacity most of the day, and that’s simply not enough to deal with the future needs of the district.” 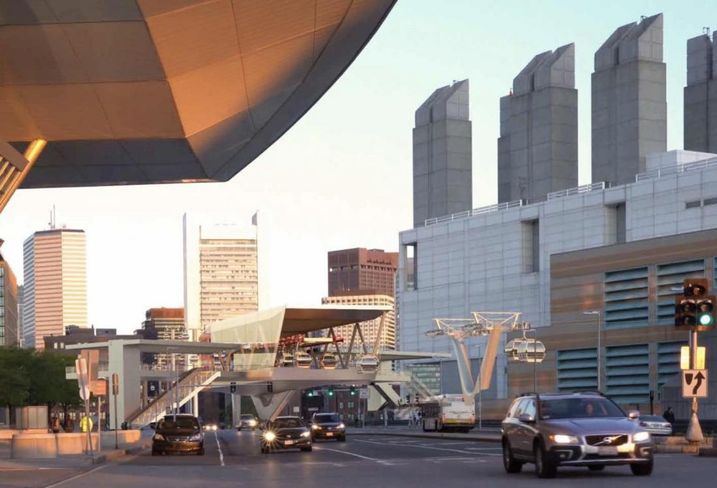 Aloisi, who serves on the board of TransitMatters and is a principal at Trimount Consulting, has emerged as an early critic of the gondola system. He has argued against a private real estate developer taking over part of the region’s public transportation system and says there is no guarantee the public would not ultimately get stuck with a bill for the gondola.

“I’m all for and respect developers who are public-spirited and want to contribute to the public good. That’s not this project,” Aloisi said. “How many developers do you know hang around forever? How many flip buildings or sell it to the next guy? Where are the legally enforceable protections to the taxpayer not in five or 10 years, but in 100 or 200? Let’s ask those real questions.”

He supports a Bus Rapid Transit network, but is quick to note Boston’s Silver Line, advertised as BRT, is not the type of system he wants to see. A better bus system with dedicated lanes is an affordable, flexible and reliable way to get more people in and out of the Seaport, Aloisi argues. But leaders are not as quick to support his pitch.

“The current rate of development requires that we do something more than just add buses. Boston prides itself on being a center of innovation, and long-term growth in the city requires an innovative solution to transportation challenges,” Rep. Stephen Lynch (D-Boston) said in a prepared statement to Bisnow. “I think the gondola idea could be one part of that solution. The gondola system would allow commuters to get out of their cars, get out of buses and avoid traffic.” 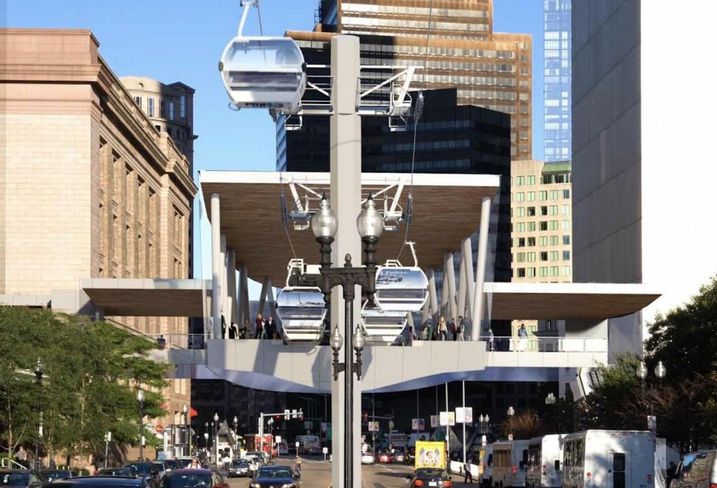 Lynch added the system would carry the equivalent of 40 buses per hour, reduce traffic on the road and eliminate carbon emissions. Although Boston Mayor Martin Walsh has been relatively quiet on the matter, Lynch noted he had been in discussions with leaders like Walsh to move the project forward. Millennium was not made available for an interview but did issue a statement to Bisnow.

The Millennium presentation identifies at least 25 cable-propelled urban transit systems around the world, including in London, Hong Kong and Medellin, Colombia. While the Roosevelt Island Tram in New York and the Aerial Tram in Portland, Oregon, are the only two in operation in the U.S., there are 16 known proposals in consideration, not including Boston's.

Dale, who began his gondola research 10 years ago, said growth and interest in utilizing aerial transit has picked up steam in the last two years around the world.

“Gondolas are incredibly cost-effective for their utility, primarily because the amount of land acquisition, site preparation and civil engineering work to install towers and a ropeway are a fraction of what it takes to install fixed rails or a roadway,” Georgetown Business Improvement District Transporation Director Will Handsfield said. 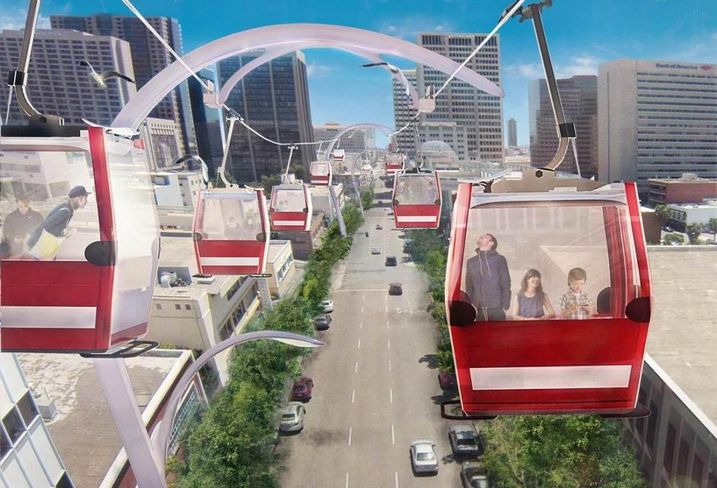 A gondola proposed to connect Georgetown in Washington, D.C., with Rosslyn, Virginia, across the Potomac River is estimated to see at least 6,500 daily riders and cost between $80M and $100M to build, and $3.25M annually to operate, according to a feasibility study commissioned by Georgetown BID. By contrast, Potomac Yard, an infill Metro station nearby, is estimated to see the same ridership but cost between $240M and $263M to build, according to Handsfield.

On the other side of the country, San Diego is exploring several gondola options. San Diego County Supervisor Ron Roberts took note of gondolas at the San Diego Zoo as well as ones he experienced while on a trip to Singapore in 2007 to provide his city with what he says would be both a fun and practical way to extend the region’s public transportation.

“There is a tendency of people to look at this as an amusement ride and not serious transit, but we think we could handle 3,000 people an hour in each direction,” Roberts said. “That’s almost like having a bus every minute, but without involving any lanes of traffic or eliminating parking spaces.”

San Diego is considering several gondola lines as a last-mile transit solution from its existing transit network to areas like Balboa Park, Pacific Beach and San Diego International Airport. The 2-mile Balboa Park line is estimated to cost $75M and see more than a million annual riders. The city’s 11-mile Mid-Coast Trolley project costs nearly $200M per mile. While Roberts is still pursuing funding options, he thinks once one line gets built, support will quickly build.

“Once one happens, it’s going to be like a dominoes lineup and fall into place,” he said.