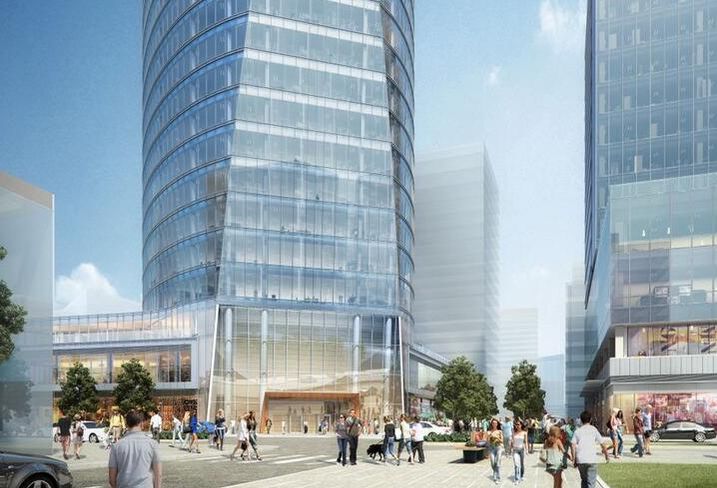 Courtesy of CBT
Rendering of 121 Seaport in Boston's Seaport District

Skanska’s speculative Seaport office tower has paid off in a big way.

The developer sold 121 Seaport for $455M to a joint venture of American Realty Advisors and Norges Bank Real Estate Management. Skanska built the 17-story, 450K SF building on spec in 2015 for about $281M. The elliptical-shaped building is notable amid the neighborhood's boxier buildings and seen as a response to calls for better architecture in the Seaport.

“121 Seaport’s unique and sustainable design and its lease-up to two pioneering companies, PTC and Alexion, served as a model for what we can achieve by pushing the traditional boundaries of development in Boston,” Skanska Executive Vice President Charley Leatherbee said in a prepared statement. “It’s bittersweet to come full circle on the delivery and divestment of Boston’s most sustainable block, but we’re proud of the green, architecturally stunning legacy we’ve left on Boston’s skyline with 121 Seaport.”

The company announced the building was fully leased in September 2017 after signing deals with Needham-based PTC and Alexion Pharmaceuticals, who will each operate their headquarters from the building.

“This investment is well-aligned with our core strategy to target modern, sustainable office properties that are highly sought-after by tenants and positioned to perform over time,” American Realty Advisors Senior Director David Willett said in a statement.

CORRECTION: DEC. 18, 4 P.M. ET: A previous version of this story listed the incorrect sales price for 121 Seaport. This story has been updated.