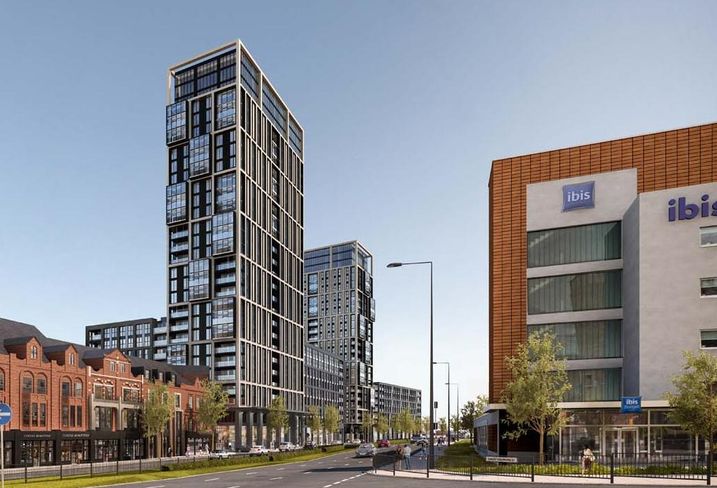 The list of developers piling into Birmingham’s Southside just got longer.

Two new schemes will add another 1,700 units to the development pipeline.

Manchester-based MCR Property Group has submitted a planning application for the £275M New Monaco development at Bristol Street. The scheme will deliver more than 1,000 new units on a seven-acre site.

Two towers of 26 and 29 storeys will stand alongside apartment blocks and townhouses at the heart of the build-to-rent scheme, providing more than 1,000 one-, two- and three-bedroom homes for rent.

Demolition of Monaco House is underway. Construction is set to commence at the end of 2018 and is estimated to be completed in 2023. Once completed, the units will be sold via Regency Residential, MCR Property Group’s residential arm.

The MCR move comes as Barratt Homes presses on with plans for 778 new apartments and houses on a neighbouring Bristol Street site. Barratt is redeveloping the historic site of Matthew Boulton College.

Last month Camborne Land announced it was proceeding with up to 500 units as part of a £100M Southside scheme. The 2.25-acre plot is on the site of the former Kent Street Baths, bounded by Bromsgrove Street, Gooch Street North, Kent Street and Henstead Street.

The vendor of the Kent Street site was Gooch Estate, which earlier this year sold a site to Galliard Homes for its Southside debut.

Galliard plan 385 units on a site at Pershore Street and Hurst Street in a joint venture with Apsley House Capital.

The latest announcements come as Hometrack UK Cities House Price Index reveals Birmingham is among the cities with the fastest house price growth over the last 12 months. Birmingham’s growth was 7.3% from a year ago, just a shade below Glasgow’s top position of 7.9% and easily beating Leeds, Manchester, London, Bristol, Oxford, Cambridge and Newcastle.