Port Covington Names JLL As Office Leasing Agent, Gears Up For Next Groundbreakings 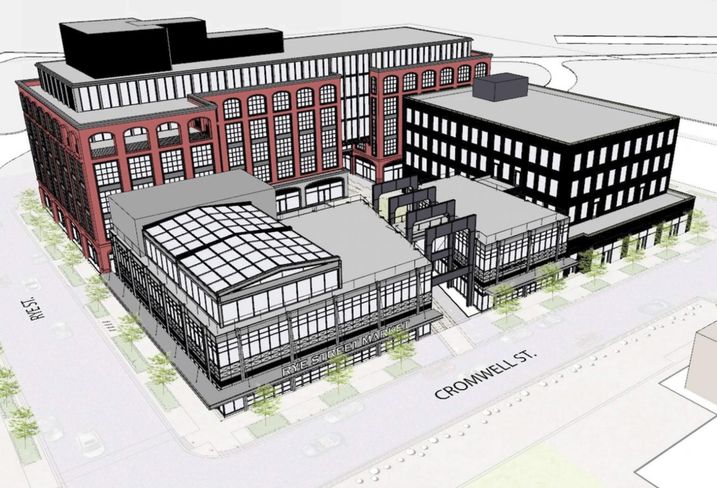 Port Covington, the most ambitious ongoing development in Baltimore City, has released its first tangible update in months.

Weller Development, Port Covington's principal developer, has named JLL as the leasing agent for the office portion of its current phase, named Chapter 1B, Weller announced in a release. JLL Senior Vice President of Agency Leasing Tony Gross will lead a team in finding tenants for the planned 1.38M SF of office space in Chapter 1B.

The first part of the forthcoming office plan will be called Rye Street Market, encompassing three buildings holding 180K SF of loft-style offices, and a fourth containing 50K SF of ground-floor retail, a meeting and conference center for office tenants and a rooftop events space. The fourth building will also include a 13K SF indoor/outdoor food hall, which the Baltimore Business Journal reports will be called Market Square.

Construction on Rye Street Market, which sits next to the already-completed Rye Street Tavern and distillery Sagamore Spirits, is scheduled to begin this year and finish in 2021. Weller is also planning a residential project, Rye Street Lofts, to be built along a similar timeline.

Weller and project architect MGMA Design presented the plans for Rye Street Market and Rye Street Lofts to Baltimore City's Urban Design and Architecture Advisory Panel Feb. 14. UDAAP board members commented that certain elements of the design were "too busy," and questioned the choice to set back the upper floors of both the residential and office buildings from the retail ground floor.

"Panel members appreciated the general direction of the architecture of the building[s] but felt there were too many facade motifs and additional editing is needed," UDAAP's hearing summary read. "The building[s] seem an amalgam of multiple precedents and a more consistent, distinctive language still needs to be found.

"The panel suggested that the facade strategy for the private street shift from articulating each building volume with a distinct facade to wrapping the street with a continuous facade, so the building volumes communicate across the street and create a more powerful space."

UDAAP sent one of the apartment buildings back for design changes, and sent the other through to the next stages of the approval process. 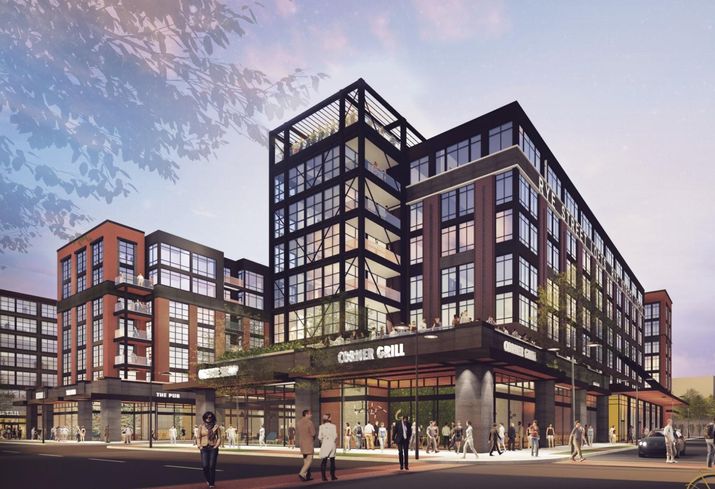 Sagamore Development, the private real estate company founded by Under Armour founder Kevin Plank, envisions Port Covington as a $5.5B, 235-acre planned neighborhood that will eventually house UA's high-tech headquarters among 18M SF of new development and 40 acres of parks and green space. In January 2017, Sagamore brought on Goldman Sachs Urban Investment Group as co-owner with a $233M investment.

Since it was initially announced in early 2016, Port Covington has changed gears multiple times. It was the center of Baltimore and Gov. Larry Hogan's pitch for Amazon HQ2, but once its bid failed to make the 20-city shortlist, Sagamore pivoted to creating a cybersecurity-focused office district beside UA, which it dubbed "Cyber Town USA."

Though Sagamore, Goldman Sachs and Weller have already recruited three cybersecurity firms to Cyber Town USA, they have not announced where those offices will be located within Chapter 1B. Now that JLL is leading leasing efforts, Gross believes that companies from outside of Maryland will comprise as much as half of the incoming tenancy.

Central to Sagamore's plans for a tech district meant to attract Silicon Valley companies is the construction of critical infrastructure. Beyond a revamped street grid to suit the shift from industrial yards to a mixed-use neighborhood, Port Covington needs high-speed internet connectivity that can support huge data loads.

To fund that infrastructure, Baltimore City awarded an unprecedented $660M in Tax Increment Financing bonds in 2016, which Sagamore and Goldman Sachs will begin to sell to private investors later this year, according to the BBJ. As an additional enticement for development, the state of Maryland designated the entire 235-acre tract as an opportunity zone, allowing for capital gains invested in developments there to have taxes deferred and decreased.