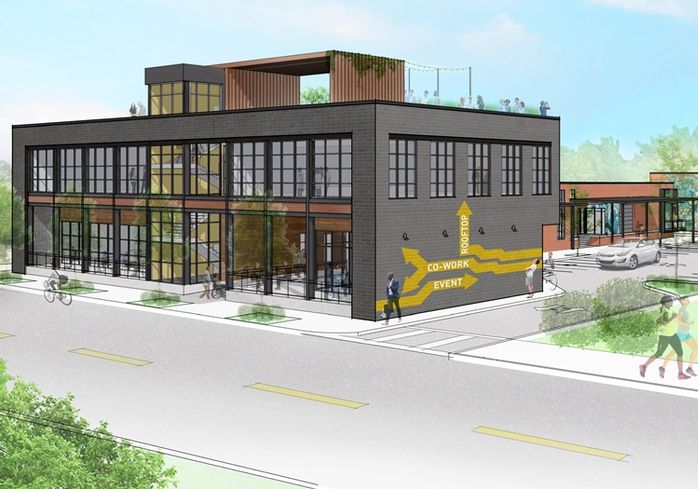 Courtesy of CineMassive
Preliminary renderings for 171 Armour Drive co-working facility, a project being spearheaded by software company CineMassive and its partner, Greater Sum

In the latest twist to Atlanta's growing co-working industry, a technology company is starting up a new facility in the Armour neighborhood.

CineMassive is leading the redevelopment of 171 Armour Drive, a 14,500 SF brick flex warehouse and office building that was previously home to an HD Supply operation.

CineMassive — which makes and installs video walls and video wall software — and its partner, the software programming training firm Greater Sum, have filed permits with the city of Atlanta to transform the building into a 30K SF co-working office.

“We have a larger concept of turning it into a technology workspace,” CineMassive co-founder David Minnix said. “It would be true co-working.”

Co-working facilities, including those focused on tech companies, have proliferated in Atlanta in recent years. WeWork, Serendipity Labs, Industrious and IWG's Spaces are among the national players jockeying for new locations in Metro Atlanta.

Recently, Colliers International Atlanta CEO Bob Mathews estimated that as much as 20% of Atlanta's office market could eventually be geared toward flexible leases and co-working.

Minnix said CineMassive is focusing on small software companies of up to eight employees to lease space at the facility for a year at a time. The partnership would host training, sponsor software company meet-ups and host technical conferences at the facility, Minnix said. The project also will include a 3,500 SF event space and a roof deck with skyline views.

CineMassive purchased 171 Armour, as well as its current home at 150 Ottley and another building at 170 Ottley, in 2016, Minnix said. The company is aiming to deliver the project by the first quarter of 2019.